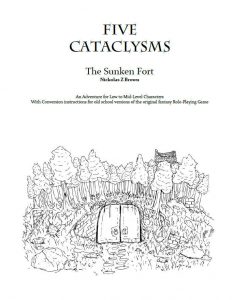 On the edge of a swamp beneath an old forest lay an even older fort, constructed for some ancient and unknowable purpose. The shadows are stronger here, and the scent of madness lingers in the air. The fort may seem mundane at first glance, but you will learn soon enough that something is not quite right…

This 27 page funhouse dungeon has eighty rooms. Imaginative, terse and well organized it brings the OD&D vibe with unique monsters and a metric fuckton of shit to get in to trouble with. Your enjoyment of this is going to be directly related to your view of funhouses. I like funhouses, they are just not the easiest to use sometimes.

This thing knows what it is doing. Funhouses are not set piece dungeons, even though they have lots (and LOTS) of little self-contained rooms. They are not challenge dungeons where some higher power is testing the mettle of the party. They are not riddle dungeons or trap dungeons. They are a curious mix of things that make sense and not. Most of all, I think they are tend to be Push Your Luck dungeons, or Temptation dungeons.

There is a certain type of … Gleeful D&D. In this style everyone is grinning and everyone is on on the secret. Imagine a room empty but for a skeleton on a throne .. and it’s holding a big fat ruby in its hands. Fuck it, maybe you even have to put your hand in a mouth of something to reach it. The DM knows that the room is a set up. The players all know that the room is a setup. The DM knows that the players know … and the players know this also. And everyone is sitting around grinning at each other. “Well, You wanna stick your hand in and grab it?” says the DM. “Looks like it might give you enough XP to … Level.” This isn’t really adversarial D&D, but really everyone kind of knows what’s gonna go down. That mouth is gonna close and that skeleton WILL be animating. Push your luck, take a chance, there’s not really hidden information. That’s a good dungeon room. And a good funhouse dungeon is stuffed full of them. And this is a good funhouse.

There’s an art to writing them to get them right. Imaginative situations, clear setups and consequences pretty clearly implied. These are done right. They are mostly pretty simple. Open a door, set a gold statues with ruby eyes floating towards you. Oh course, it’s got a floating clear ooze surrounding it that’s initially hard to see … but, of course, everyone knows SOMETHING is up with it. It’s just a matter of what. This dungeon executes over and over again. Big big fan.

OD&D style has a strong element of the new and interesting for monsters and treasure, and this is most definitely OD&D. No orcs but lots of new monsters with new gimmicks. I love that because the players have to figure out new things to do to defeat them. They instill apprehension, if not outright fear, in the party. And those fuckers always need a bit of fear to keep them in line. OD&D thrives on the non-traditional. It’s the anti-Tolkein. Or. maybe, thrives closer to Bill & Berts issues with sunlight. Talk to the monsters, and get the KICK ASS magic item when you get them turned to stone.

The map is nice and large. Eighty rooms in 27 pages means a terse writing style. There’s enough text to get the DM going and it’s organized well, with bolding and paragraph breaks and general text leading to more specific. It’s RIGHT on the (wrong) side of providing GREAT room descriptions. So close to being really magnificent … but still very good and NOT falling in to the verbosity trap. The monsters, in particular, have great descriptions that take a heartbeat longer than “perfect 10” to get the DM’s imagination going. Exploding Ethereal Skull. A lizard of scrap metal that reeks of machine oil. Bloated firebats are “A fat winged creature that has gorged itself on fire oil and transformed into a flying orange blob.” Imagine it barely able to fly, dripping big flaming globs of oil. That’s where my imagination went.

It’s even got a GREAT hook, with villagers getting their shadows ripped from their bodies by some pale creature with a description straight out of a nightmare. It’s fucking WONDERFUL.

It could be better. The descriptions are about a heartbeat behind perfect. Some of the rooms are not perfectly organized. Room two is an example, with statues being missed in the initial description … and then the “a,b,c” elements of room not standing out as well as they could in the text. A lot of the mundane treasure is “a pile of 1200gp and 80 gems worth 800 gp” … not the soul of evocativeness. It also lacks a certain … theming? Both players and DM need theming to put certain logic to use (for differing purposes) in the dungeon. There’s a lack of a cohesive story in a funhouse dungeon. Now, I’m talking 5e story, but more a many Gates of the Gann story. An element of the entire dungeon kind of working together. That is, I think, what separate this from, say, The Upper Caves of the Darkness Beneath. (Well, that element and a few other things.)

This thing is fun. It can work as a one-shot, for beer & pretzels, or at a con. It can also ABSOLUTELY work in a normal campaign. There’s not a lot of “modern” puzzles, etc that break immersion. Yeah, not everything makes sense to be in a dungeon .. but it’s not some fucked up mish-mash of an elevator puzzle either.

This is $5 at DriveThru. You get to see the map (yeah!) the wander monster table/descriptions (yeah!) and the first page of rooms (yeah!) It does whata preview needs to do.
https://www.drivethrurpg.com/product/248347/The-Sunken-Fort?affiliate_id=1892600

7 Responses to The Sunken Fort