Under the Temple Crypt 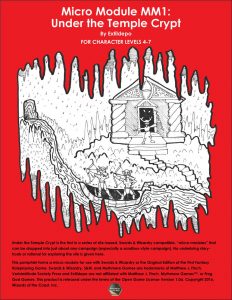 This dungeon assumes that there is a temple somewhere with a mysterious walled-in doorframe in the basement crypt. The walled-in doorframe predates the temple itself and leads to ancient subterranean structures that hint of an older civilization as well as an expansive underworld.

This wight page dungeoncrawl has a twenty-ish room ruined city/underground area. It stands out for being mostly inoffensive, a wonder in and of itself these days. The writing is a mix of workmanlike facts and decent imagery, leading to an inconsistent vibe overall. A little polishing of the text would have elevated this quite a bit. Still, I’m not mad at it.

This one is close. It’s got a pretty decent “drop in dungeon” premise, being behind a bricked up doorway. The supporting map is ok, with lots of varied terrain, tunnels and hallways, under and over tunnels and so on, especially for its small-ish size.

This is just a basic little dungeoncrawl in a mixed dungeon, both in creatures and in setting, from caverns to mini ruined underground city portion. It’s quite successful sometimes in the writing. Overall you get themes of decay, dust, fallen stone block and crumbling ruins. This is built up through repetition and the artwork present, both of which are good techniques. Ornate pillars with stylyze reliefs of animals, large and sticky cobwebs hanging from pillar to pillar, slowing movement and obscuring vision. A green and purple luminescent glow emitting from behind a broken wall … thats room two and it’s a pretty good description. I can imagine it, and more, and because of that I can EASILY build on it for the players. There’s more than one room that reaches this great height of writing.

But it’s much more usual for the writing to be more workmanlike, and less evocative. “This crypt is typical of the times.”, “These dead priests still wear their ceremonial robes and stoles”, “This once opulent sanctuary is now a ruin.” or “The entrance to this building is open and arched.” It’s all very workmanlike, and more than a little bland. A bathhouse has pools of black liquid. BORING WORD CHOICE. Another room has a dozen large ceramic urns. Give it some life man! “This is the lair of a fearsome troll.” is not an evocative room description.

This extends to the creatures. There’s a giant spider who attacks. There are ghouls who attack. Various creatures. They just don’t have much life in them. Ghouls from a ruined city? Those should erudite ghouls, or an inquisitive spider, and so on. They need a little life to them. Not everything has to be something you can to, but it needs a adjective or adverb, some kind of descriptor to bring the thing to life.
So, it’s ok. It doesn’t overstay. It’s got a decent map and a few good descriptions along with some things to poke at that contribute to ok encounters. It tends more to the bland side, but, again, I have overly high expectations. It’s close. Some refinement, especially around word choice, would send it in very good territory.

This is $1 at DriveThru. Note that the level range is NOT in the product description, only on the cover. Boo! The preview doesn’t really show you anything more than the map.https://www.drivethrurpg.com/product/252018/Under-the-Temple-Crypt?affiliate_id=1892600

4 Responses to Under the Temple Crypt