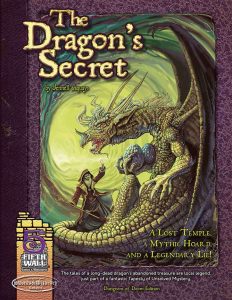 The Dragon’s Secret centers on a mystery from the past: villagers invited a gold dragon to bless and protect the region with her presence… for a little tribute… and a temple… and followers… and perhaps just a whole lot more tribute. When the dragon eventually went mad, she laid waste to the surrounding lands in a fiery rage, ending with her death at the hands of heroes. Except… they found almost none of her treasure. In time people forgot the cathedral’s location, but the legend of her missing treasure still inspires seekers to keep looking.

This 54 page adventure features a three level thirty room dungeon. A classic exploratory dungeon stuffed full of things, it manages to be both verbose AND scan well … generally. A few more cross-references and some rewording would push this beast in to very rare territory indeed. Also, it has the ducks/aardvarks, a featured Jaquayism, for those of you for whom D&D is serious business.

Classic Exploratory Dungeon. The rooms in this are stuffed full of things. It seems like every single room has three or four different things going on it. This isn’t the hidden depth of Kuntz, which is seldom realized, or the immediate gratification of a modern set-piece room with 12 terrain features to exploit. The rooms here remind me a bit of the classic examples from the 1e DMG … if they had more going on. You can poke and prod several different things in each room, or get poked, as the case may be. This turns each room in to a mini-adventure, with as much to do as the party cares to engage in. One small room is a square tower stairwell, opening on to a room at the top with a door that leads to the roof. Stairs count as #1 thing. The final rotation of the stairs are barricaded with thorny brush, heavy branches, fire sharpened stakes, etc. That’s thing #2. There’s also a secret door, but we’ll ignore that. The top of the stairs are rotten, that’s a “trap” and #3. Big pile of treasure in the a jumbled mess in the center of the room. That’s feature #4. And then there’s a bunch of piercers up in the rafters, that’s #5. Now, look, you could think of this as a room with a pile of treasure, a trap, and a monster. But that’s not how its WRITTEN. It’s both a cohesive room and yet it feels like there’s these separate elements to encounter and enjoy. Room after room after room does this. Secret side entrance. Gold dragon altar in the corner. Mechanical dragon if it sees you. Slide it aside to in a hole with treasure in it. But there are also centipedes in it under the treasure. And werewolves in the next room that can agro in if they hear you. It’s depth, it’s hidden, but it’s not obtuse and it’s LIKELY to be encountered. And, in both examples I cited. You can agro in creatures from the next room if you are loud. There are linkages between things. It’s a really, really good design. This is the kind of shit that I love to see. Exploratory, overloaded. It’s classic D&D at its finest.

The rooms are long. I’d say “a column” is average for a room in this, as the page count to room number would indicate. Rooms have a description, and then a backstory heading, a remarkables heading, a secrets heading, a curios heading, a denizens heading, a tactics/roleplay heading, and so on. I have theorized in the past that one could be verbose and still make something scannable. This comes about as close as you can get, I think. Th headings make it easy to locate (or skip, in the case of background …) the important sections of the room. You can the general description and relate it to the party and then, as they explore the room, your attention is drawn to the other various sections. It’s a tad mechanical, and I’ve seen terser formats that accomplish the same thing, but overall I think it works. It scans well, which means it helps the DM run the room, which is, ultimately, the purpose of all room descriptions.

Which is not to say it’s perfect.

My primary frustration is with one of the strengths, the rooms linkages. Gargoyles fly off to get help from the rest of their gagle. Yeah! Room linkage! Uh … which room is that gagle in? Or, noise from one room doesn’t really translate well in to what gets drawn in. That alter room has some werewolf treasure in it. They are in the next room. But you don’t know that. Until you come to that room entry. Thus what’s it missing are some simple cross-references. “The gargoyles fly off to get help [a8]”, for example. There ARE some attempts at cross-referencing, but this generally comes up in the case of the the adventure side quests and rumors, etc. They are GREAT there, and totally worth it and appreciated. But the rooms are missing it. There’s some great color in some of those, and more than enough to make this a pretty rich environment … if you put the work in. They are tacked on in the back and while each one references things in the adventure and adds a LOT of local/regional depth, they DON’T scan well and are, well, hooks to be developed by the DM. Prepare thy notepad! Wanted signs plastered all over for two criminals? Count me in on that color!

Finally, I’d note that the room descriptions, while good, are not great. I’m talking about the initial little description that talks each room, not the added section heading/expanded detail. The rooms don’t always start with the most important things near the top of the description and sometimes omit some things that seem important to the ‘hidden depth’ of the room. I’m not sure that knowing the werewolfs are two familiaes helps as the first room entry? There’s generally some good imagery, with light from dragon lamps, some missing and dark, illuminating a golden dragon statue, for example. But it’s also the case that some DM cues could be more obvious at the start of the room.

Wanderers are doing something (yeah!) but treasure is generally book items and boring +1’s and 150gp gems. I can has sads? I wanted more in that area. There’s also weirdly placed asides. I blame layout for this. I LIKE asides, like what makes THESE gargoyles special. But it appears deep in the adventure not near the first gargoyles. That makes you have to remember that you say it before. I don’t like membering.

Yeah, I’d pay $15 for this and I’d run it. Hyquatious Vaults, Blue Medusa, Guy’s work, Darkness Beneath/Upper Caves, and DCO all have their strengths and do things well. This falls close to Vaults and/or Guy’s work, being classic D&D exploratory, but with a FUCK TON more going on. Or, at least, FEELING like it is going on. It doesn’t feel as focused as those other adventures, which maybe is because of the room length or the overloaded nature of the rooms. I don’t know.

This is $15 at DriveThru. The preview is seven pages and TOTALLY lame. It doesn’t show any of the rooms at all. It’s important for people to understand what they are getting and showing how a typical room is written, in the preview or product blurb, is an important part of that.
https://www.drivethrurpg.com/product/247579/The-Dragons-Secret-Dungeons-of-Doom-edition?affiliate_id=1892600

2 Responses to The Dragons Secret