Jewel of the Lunar Rift 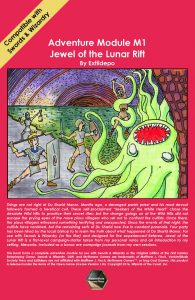 Things are not right at Du Sharid Manor. Months ago, a deranged parish priest and his most devout followers formed a heretical cult. These self-proclaimed “Seekers of the White Heart” chose the desolate Wild Hills to practice their secret rites; but the strange goings on at the Wild Hills did not escape the prying eyes of the more pious villagers who set out to confront the cultists. Once there, the villagers witnessed something terrifying and unexpected. Since the events of that night, the cultists have vanished, but the remaining serfs of Du Sharid now live in constant paranoia. Your party has been hired by the local bishop to to learn the truth about what happened at Du Sharid Manor.

This 38 page adventure contains an eighteen room dungeon on about ten pages, with the rest of the material being appendices, support material, and a campaign journal of the initial playtest. It feels real, both the town portions and the dungeon, and has that kind of natural vibe with interesting encounters that harken back to the pre-standardized days of D&D. It’s also got some serious wall of text issues that make a highlighter a must.

There is a rich background here of a shire, four namors, and a local priest gone bad who disappears in to a chasm in the ground as a mob descends on him. The bishop wants the situation sorted, which leads to a small dungeon at the bottom of the chasm. I’m usually not a fan of these “hired job” hooks, but this goes a bit further and puts a local priest in charge of the expedition, and its he who hires the party. Again … not usually a fan of the NPC tag a long, but it goes further and gives him a slightly overly-pious personality AND has him retreat to the inn at the first sign of damage to his person. NOW I can get behind it. It’s taken a lame hook, hired, added a lame feature, DM pet, and then subverted both by making it an EXCELLENT roleplay opportunity AND putting the party in charge in a natural way. It feels real and accessible and, in spite of my description, just familiar enough for the party to enjoy without being hackneyed.

I would say that’s a common feature of the adventure, and dungeon. A gatehouse where the guards shake down people passing through. Or a deep and dark pool of water with a tentacle horror in it that awakens when someone slips in … ala Fellowship. Bodies reanimate is prodded (GREAT! That’s a push your luck element! Everyone knows what’s going to happen … do you do it anyway? I love that kind of stuff.) I would say that the themes are familiar but the encounters are not straight copies of others in every other adventure ever published.

It’s got a lot going for. Charming hand-drawm maps that are still easy to read, an NPC summary sheet, even a little bit of faction play in the dungeon with some hyper-intelligent giant ants. And there are 30 goblins down there, that will react to intrusions, making parts of this a hard slog if the party isn’t careful and/or resourceful.

But … it’s not an easy journey for the DM. It’s all in single-column format. SIngle column is a pain. Isn’t there an article someplace in the forums/blogs about columns/readability? It sounds like something I’d read from Guy Fullerton. Anyway, single column, not much/any use of whitespace and/or bolding to improve scanability. Relatively longish descriptions … or maybe they just seem that way because of the single column? There’s not much read-aloud (maybe two, both from an NCP talking to you), but what there is can be long. In one case a farmer relates his pulling down of a black & twisted tree. But just a few entries later there’s a nice little once sentence summary of the same thing that could have been used.

Further, there are a lot of little things that just rub me the wrong way. In one room pillars hold up a roof and you can knock them down. Wouldn’t DELICATE pillars holding up the roof be better? How do the players get the idea that the pillars can be knocked down? Or do your players just knock down all pillars they see? I hugged a pillar once in Tower of Gygax. That didn’t work out so well for me. And the map scales are all over the place and don’t make sense. Trivia, to be ignored, but it kind of serves the purpose of illustrating that this entire thing needed strongly a second pair of eyes to go over it deeply before it made it to PDF. Likewise the NPC summary sheet, which concentrates on stats instead of personality and WHY that NPC is useful to the party. The party is more likely to talk to the innkeep than hack her down … so maybe focus the DM resources in that area? I’d love to see a second version with the text cleaned up, more readable, etc. That would be a good, solid adventure.

Man, I really like this adventure, but it just seems like too much work to highlight it. To be sure, it IS better than most in that area, but it needs a highlighter nonetheless. I’m gonna regert this because I think it’s charming and it’s my blog and I get to be arbitrary sometimes. 🙂

This is $2 at DriveThru. The preview is five pages and shows you nothing but the beginning of the background information. Nic setting .. but it should all be in a setting book and not the adventure.https://www.drivethrurpg.com/product/244309/M1-Jewel-of-the-Lunar-Rift?affiliate_id=1892600

7 Responses to Jewel of the Lunar Rift