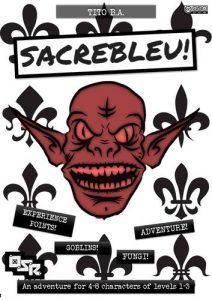 This thirteen page adventure describes a village and a few encounters on a small island. Containing both hex crawl and dungeon elements, and elements of sandbox, it’s generally terse, evocative, and a little gonzo. It’s a decent little adventure.

Let’s see if I can get this straight …

It’s a small island, maybe 6 hexes by 6 hexes with each being 6 miles. There’s a small town/village that was just raided by goblins. They splattered the wizard that rules the town during their attack. He founded the town to mine some druggy fungus on the north end of the island. The goblins are, unknown to anyone, led by the wizards father, who was turned in to a goblins by his sons. Seems the wizard left leaving his brother in charge and he was the one splattered while the wizard was just seriously wounded, fleeing to a temple he razed a few months earlier. Oh, and the goblins are lairing in a different temple and killed a squad of WW1 french soldiers that came through a time portal, eating their brains to learn how to use the machine guns, rifles, grenades, and pistols. Oh, and the dwarf CURRENTLY in charge of the town is a little shit betraying the wizard. And I see a ship in the harbor that trades in goblin slaves. And … well, I think you get the picture. The fucking place has ALOT going on. And an adventure with a lot going on is an adventure I can get behind. Add a spark of PC magic to powder keg and watch it BLOW! A small setting with a lot going on gives the party a lot of opportunity to make plans, back one side or another, and in general treat the place like a sandbox. You could kill the wounded wizard and take his shit. Or side with the goblins. Or the dwarf in town. Or yourself. Or the wizard and help him exact revenge.

The supplement supports the DM. The directions for hexes traveled are direct and to the point. As are weather. Not just trivia, but how it impacts movement and the adventure. Most of the shit is directed AT the adventure. It’s not trivia, it relates itself to the adventure proper. That’s rare. And very good. The wanders DO things. There’s even a dragon willing to parlay with the party to remove the goblins.

Did I mention the temple to time, the second temple the goblins are in, was built by the cockroach people early in their history? That’s the kind of stuff that adds flavor!

The plot develops IN the adventure, inline to the text, much in the same way G1 did. The writing is generally short and terse, evocative and easy to scan. There are orders of battle for the goblins to respond. The town has some little subplots and the shit in it is full of potential energy. The treasure is good … like a silver hairnet inlaid with elephant ivory.

The font is some weird art project typewriter thing, which, while not destroying readability, does nothing to help it. Some of the wandering monsters, in particular the ones at the beginning of the booklet, are NOT oriented towards action. They tend to the be the usual “look, you found a basket!” kind of stuff.

Things can also get a little rough. There’s a goblin ambush on the road with an MG, a rifle squad, and grenades … nine in total. That’s kind of rough at level 1. I mean, I like it, and there IS a surprise roll in D&D for that wilderness wandering monster table … but man, rough shit.

Anyway, good adventure. Creative, LOTS going on, a kind of open-ended sandbox design, good treasure … little wonder the designer credits Sholtis, Gus, and other luminaries as helping to inspire them. Easily makes the Best Of list, which can tell by now because of my shitty shotty review of it. I gotta figure out a better way or writing positive reviews.

This is Pay What You Want at DriveThru, with a current suggested price of 50 cents. The preview is a pretty good one and gives you a good idea of what to expect. Typewrite fonts, good sidebar usage and bolding, both the good and bad wandering tables.
https://www.drivethrurpg.com/product/243550/Sacrebleu?affiliate_id=1892600