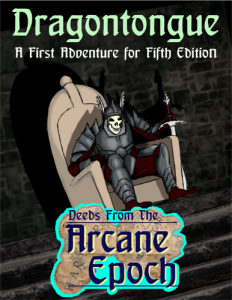 Many have heard the songs sung by the bards about Justin the Vindicator and the heroic deeds that he performed with his magical sword, Dragontongue. But the sword once had a different name when it was forged by the dwarves and was used by their own in defense of their lands. Now the dwarves want Dragontongue returned to them. But where is the sword now?

This ten page adventure describes a twelve room tomb with bandits and an undead guy. It has a good idea or two but also has the usual 5e bloat and makes bad choices in presenting the text of the adventure.

Dwarf hires you to go find the sword, buried with a knight. Seems it was once a dwarf relic before the knight took it. Just find it, that’s all. Look around. It’s in a burial mound six miles away. The mound is guarded by a senile knight of an almost disappeared order.

That encounter is the primary bright spot of this adventure. He guards the entrance, and is lawful good. How do you reconcile that with your charge? He’s senile, so you could trick him … how does tricking a LG knight in order to grave rob/enter the tomb of a famous knight strike you? It strikes me as some good roleplay. Mostly. There’s always the possibility that the party WON’T talk themselves in to it. In which case … there’s a band of brigands that have dug a hole in the tomb on the backside. I might have suggested a few words about what to do/how to use the brigands to solve the moral issue if the party talks themselves out of it, but, whatever.

This is the primary high point of the adventure. There’s some business about trapdoors and mirrors and levers controlled by the leader, which should provide some interest, but it’s mostly just a plain old ordinary small dungeon complex. Bandits, an undead guy on a throne in the basement, the usual.

But the choices made in presentation turn it from “meh” to “pain.”

First, there’s the use of a small font AND combined with italics … it’s a pain to read through. Italics should almost NEVER be used, and certainly not for large chunks of text. Yes, I know lots of adventures do it. Italics is a pain to read in large chunks. Don’t do it.

The read-aloud, when it’s not a column long chunk of italics, engages in some dubious behaviour. We’re told that there’s dust on the floor. Then it also has “Some of the dust has been disturbed.” NO! NO NO NO! You save that shit for when the players ASK about the dust. “I examine the dust.” h, ok, then some of it looks like it has been disturbed. There’s supposed to be a back and forth between the DM and players. You don’t abstract things that contribute to play. That’s why this is ten pages and not a one sentence adventure: “You go the mound, trick an old knight, fight bandits and an undead guy and then retrieve the sword. 300xp each.”

The rooms also do weird things with the DM text. It takes three paragraphs to describe a tripwire crossbow trap. Seriously? Or, how about the single dire wolf you encounter … which then takes pains to tell us that dire wolfs get advantage if they fight in a pack. But that just means the designer copy/pasted some shit in. There’s only one wolf. Why the fuck would you include that? It all feels sloppy and not put together. AN order of battle for the bandits? No, they just wait in their rooms to get hacked down.

There’s not much interesting in this. The knight, maybe the leaders use of trap doors and mirrors and levers. That would make it just “the usual adventure” (meaning it would be better than 95% of the dreck published today.) But then it go forward with the italics, read-aloud, weird and lengthy text padding … It’s just not worth it to dig through to try and run it.

This is $2 at DriveThru. The preview is only three pages long and the only one of ANY value is the last one. It’s a good example of the italics/small font and lengthy text, but it doesn’t really show you a room and the text here is less focused than the room/key encounters.https://www.drivethrurpg.com/product/243000/Dragontongue?affiliate_id=1892600