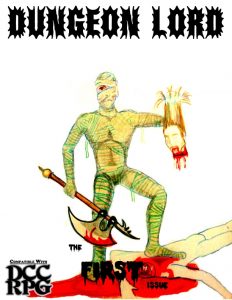 This is a 28 page zine with a kick ass cover. It has three dungeons in it, as was published in 2014. Good ol’ Bryce, always on the ball. I don’t seek out magazines/zines magazines, but the cover lured me in. I wonder why the adventurer is naked? THis claims DCC, but I think most of the issue has a great OD&D thing going on.

Calcified Caves of the Slime Yeti – Ron Yonts
And another anomaly: a one pager. Again, I don’t usually review these. I like a good one-pages, but the amount of content usually strains my ability to say something interesting about it in a review. This cave system is both wt and dry and features some sloping caverns and holes in the ceiling to get to other area, as well as a river to explore other areas and other terrain effects. That variety is a very good thing, bringing out the exploratory nature of D&D and offering combat options. Note also that it’s not a river. It’s an ICY river. And it’s not a yeti it’s a SLIME yeit, and not caves but CALCIFIED caves. It’s a simple trick but it helps amp up the imagery. This continues with a dried streambed, dry corpses, stirge husks, and dangling buckets. This isn’t stated and the fifteen room adventure has three monsters, in addition to the wanderers, but mixed in are traps and magic pools and the like. I think it’s an excellent example of a one-pager and much much better than most of the adventures I review. I’ll take this as a Lair or Side Trek any day of the week.

The Caves of the Sacred Seven =
This is a thirty room cave complex roughly divided in three sections: cavemen, reptile men, and prehistory … with a map that could easily be easier on the eyes, As you get deeper in freaky things start happening in the corridors (a d30 table) as you experience all the weirdness of the underworld. The rules are all wrong and every perversion is justified when adventurers journey to the mythic underworld, Aisha. The encounters are decent, with some willing to talk and/or trade, and a bit of silliness mixed in. Ooze pits mutate you, and egg incubation chambers await. The text style is very “wal lof paragraph.” The incubation chambers starts with “This chamber appears to be a sort of nesting area for reptilians with many eggs …” Yes … that’s why the room title is “Incubation Chamber.” The text also spends a decent amount of time describing the physical logistics of rooms “the north path runs along the edge of the lake” and so on, as well as delving in to generic descriptions like “This large chamber …” Focused writing with a strong edit would shorten the rooms and make them more scannable at the table and make this an ok adventure.

Tomb of Zarfulgar the Lost
The last entry has a linear map that spells out “ABQ Zine Fest 2014,” so it’s a bit of a funhouse adventure. It’s fifteen rooms, in a tortuous typeface. A gnome with a big treasure sack that grows sharp teeth and tries to eat the adventurers. A room full of friendly clones of the wizard in question, with one doppleganger. Buzz saw blade corridors and creatures made of light that bludgeon you to death with their shoes. It’s a decent funhouse that is a pain to run because of the typeface and wall of text paragraph style. Too bad, it looks fun.

This is $6 at DriveThru. The preview only shows you the one-pager, with the other five preview pages being table of contents, etc. Bad zone writers!https://www.drivethrurpg.com/product/138701/Dungeon-Lord-the-First-Issue?affiliate_id=1892600