BL1-2 The Ruined Hamlet / Terror in the Gloaming 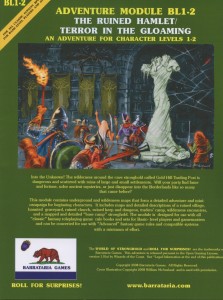 Into the Unknown! The wilderness around the cave stronghold called Gold Hill Trading Post is dangerous and scattered with ruins of large and small settlements. Will your party find fame and fortune, solve ancient mysteries, or just disappear into the Borderlands like so many that came before?

This is an interesting module. Like so many beginning modules it has a home base with a couple of adventures and some seeds for further adventurers. This one is a step above most of the others in that it actually presents quite a few interesting situations and encounters. It’s not perfect but it hits most of what I’m looking for including the most important of all: interesting and evocative places and encounters.

We’re presented with a wilderness area that’s about 6 miles by 8 miles. Civilization is back on the path to recovery after a period of trouble so there are many ruins present and a single Point of Light in the area. The local lord, tired of all the bandits, officially recognized the lead bandit and put him in charge of the area, including getting rid of the other bandits. He’s in charge and is trying to do his best. He motivated since he wants to be knighted, but at heart he’s still a rogue and still authorizes some raids in other areas. His headquarters is a local cave system which also contain an inn. Both the backstory of his rulership and caves are quite interesting and should add a nice bit of flavor to the game as well as providing ample opportunity for roleplaying and future hooks. The caves are quite extensive and have several sections, they being the local village, including an unexplored part. The map for the caves is quite interesting as well and fully fills a page. It reminds me a lot of the Keep in B2, except the ruler is less noble and there’s a few more village hooks. The rumor table is excellent as well and should serve as the basis for several relevant subplots.

The wilderness area has about a dozen sites to discover and explore. At least two of these, The Ruined Hamlet and the Wizards Tower, are quite extensive with 20 or so keyed encounter locations each. Several of the other sites have a half dozen or so locations with maps being provided for several others as well. The locations are well done with lots of interesting features and can be quite evocative. I particularly liked the environmental changes in the ruined church and the harpies in the tower. Most of the more interesting things are buried in the room descriptions and NOT in the boxed text. Each area tends to have some lengthy boxed text which I did NOT find particularly interesting, however the supporting details that followed, for the DM, were generally very well done. Lots and lots of secrets for the players to discover and interesting things going on. For example, there are harpies in a ruined tower covered with vines. Failing your save means you climb the vines on the tower. Failing a climb check means falling for damage, and a new save vs the Harpy. I’m not sure I’m describing it well however the module does an excellent job of painting a picture for the DM that can’t fail to get ones imagination going. The same goes for the looting of the church; the players are SURE to wonder what they’ve done, probably with an audible “Ought oh” coming from at least one of them. That foreshadowing is then used to good effect as other events begin to unfold in the region. The other smaller sites are just as well done and contain a variety of human camps and beast encounters. Quite a few of the encounters have the living feel I’m looking for, with hobgoblins chopping up halfling legs for lunch, and so on. There’s also a big timeline type event that can take place which adds a good deal of feeling that the party is having an impact on the world around them. I very much approve. There’s a lot of mundane mixed in on the encounter tables and on the wandering monster tables, which I prefer since it makes the fantastic, like the Harpy, seem all the more incredible. In fact, the mix is just about perfect with a strong showing by the human NPC’s/encounters, except for some hobgoblins that show up. I really enjoy this stye of play. The wandering monsters are all doing something as well. The table is extensive and each entry has at least a paragraph of description, including what they are doing and how they are likely to react to the party. There are some recurring encounters as well, such as several of the NPC’s that also show up in some of the camps, and at least one recurring animal encounter.

I’m not a fan of boxed text. While this module does not have column length boxed text, or longer, it does have short paragraphs and I don’t enjoy that at all. Many of the encounters tend to be a little verbose as well, such as the lengthy paragraphs for the wandering monsters. The town/cave is also a bit overly described, much in the same way the Keep was in B2, almost as if the party is expected to raid it. Other than those issues the module is a near perfect example of what old school means to me: interesting situations and evocative detail for the DM which allows him to pass on the feeling to his players. In a slightly different way I think it’s almost as good as the Village of Hommlet, which is high praise indeed.