Grave of the Heartless 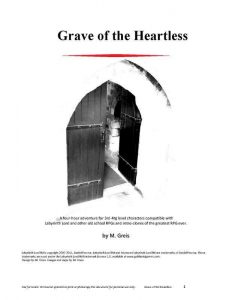 A curse is upon the land. In the old barrow long forgotten a forgotten general awaits trying to confront death, and until heroes can guide his way, the land suffers.

This seventeen page adventure details a haunted burial mound/barrow with about a dozen rooms over five levels. The evocative text and interesting rooms drift to the long side, while the map is both interesting and drifts towards confusing to understand in places. I tend to like a good barrow adventure, and I like this one spite of some flaws.

The adventure doesn’t fuck around, giving us just a short little overview and background before launching in to the hooks. The “normal” ones involve a burial item being stolen from the barrow and needing to be returned, with a couple of variations. Hero hooks include finding a bloody and grisly trail and an “adventure path” hook involving invading humanoids and the arrow of a once famous general. What’s nice here is the variety and in particular the adventure path hook. Tangentially related to a couple of other Greis Games adventures, the “invading army” and preparing for it are now something I find interesting enough that I may run these as an alternative path over Winter Fantasy weekend instead of subjecting myself to that torture.

With maybe three pages of monsters and magic items in the appendix, most of the pas count is devoted to the adventure. There are two small barrows next to each other, one with an entrance, and the adventure proper has the party exploring the dozen or so rooms between them. The map is three dimensional and reminds me of an ant nest, with circular chambers and sloping dirt tunnels running up and down between them. Thus most of the chamber are actually under the barrows instead of inside of them. Hobo’s gonna Hobo, and the adventure correctly provides advice for parties digging in to the barrows. (And it’s the correct advice also: let them do it.) There’s also a chimney and a well that cut through several of the levels, providing alternate routes.Laid out two dimensional the map wouldn’t be that stellar, but adding the sloping passages up and down as well as the “cut through” well/chimney both really elevate it,

It is here we will pause and relate some house rules and design philosophy spelled out for us via offsets in the adventure. First, you can talk to almost everything. From hobgoblins lost in the barrow to an undead dude, most of the intelligent creatures are not immediately hostile. Stabbing things is but one way to achieve your goals in this thing. That’s something I wish more designers did. Yo can ALWAYS fall to stabbing someone, usually out of frustration with them, but adding a social element really adds depth to the adventure. You can get to KNOW the creative prior to stabbing it. Or, maybe even note stab it and get valuable information!

Greis does something else that I like also: give XP for each room explored. This adds a kind of explicit Push Your Luck mechanism to the game. With GOLD=XP games being about resources management and treasure extraction, it’s nice to see this other element added as well. My platonic example is an ogre wearing a jeweled crown. Get that crown and you’re leveling up … but the ogre is powerful AND friendly. Want that level? How much do you want it? Enough to do something stupid … like backstab the ore or explore the room up ahead with the wailing?Playing with resource management and push your luck mechanisms results in tension and tension means a good time at the table.

But, back to the adventure. This is a conversation from the Danish and, some dropped words aside, does a MUCH better job than most native english speakers in creating an evocative environment. Shadows seep out, darkness swallows sound, the cold weather bids no one welcome and no birds sing and no insects buzz. Methinks someone got their moneys worth out of their minor in Beowulf! But, seriously, both the boxed text and the DM text does a GREAT job of being evocative. You really get a FEELING of what the scene is. This ranges from the blood and viscera of slaughtered game outside the barrow to a good low/cold expanse that the barrow sits on, as mournful as an classically described barrow plain. The dungeon vibe, with darkness swallowing sound and shadows seeping out, only reluctantly dispersing when light approaches … I can fucking use that. It both builds the vibe in your mind AND provides gamble content to scare the shit out the players. Your DM just told you the shadows linger in your light and then kind of snap back all at once in your lantern light … H O L Y F U C K thats gonna put me on edge as a player! Mythic underword and all that indeed! You know you are in a place where the normal rules don’t apply.

There’s lots to do in the rooms and lots to explore, including a passage to the lands of the dead deep in the barrow, and an undead hero who doesn’t want to pass on. Treasure is well described, with silver belt buckles shaped like a pouncing lion with sparkling red gem eyes, ring and bracelets decorated in geometric pattens, and a gleaming green glass drinking cup with a wolf paw silver foot, a brass quiver lined with fur etched with people hunting boars … the effort it takes to describe treasure well is minimal and it adds SO much to the adventure, early giving the players the sense that they have found something. “You find a treasure parcel.” Fuck you. Why not just roll a die, on a 1-5 you win the adventure and on a 6 you rereoll? The journey IS the destination.

The adventure does have a few problems. The mini-maps, inline with the text, do a good job of showing where the various room passages lead. The “big map” in the appendix is a FUCKING SHIT SHOW. It’s trying to do something with letters to show how the passages link up, but I am fucking confused to all hell and back. Maybe drawing some lines between things would have helped, or explicitly putting room numbers on it, like the mini-maps have. Maybe a nice isometrics or side view also? I don’t know what would help but I do know that the main map is terrible. The minima’s solve all of the problems with it though.

I could quibble a bit with some of the monsters descriptions also, and/or lack thereof. The fire beetles and hobgoblins both get a decent physical description, for example, with a 3-foot long armored better with high mandibles and a fiery glow from smoldering chemicals. Or grey-red skin with gleaming yellow eyes and clothed in the skins and leather of heated animals and worthy foes … those are great descriptions. They are also prominently displayed i the creature description, you don’t have to fight through a bunch of cultural of history shit to get to what you need RIGHT. NOW: what the party sees. But then, when it comes to the undead (which play a big part in the adventure)we get almost no description at all. Corporeal undead, “they cannot move on to the afterlife.” “Remnants of the dead existing only as shadows and memories.” Yes, but what do the fucking players SEE, or experience? “Sliding along walls as shadows with monstrous long claws and fearsome jaws gained from the nightmares of children.” Fuck yes! THATS’s what I want to see! Monster descriptions should be high up in their entry, and you better have a pretty good fucking reason to not put it first. Those shadows with claws and jaws are a great example, while “incorporeal undead who can’t move on” is a great example of a shit description. Help me, and through me the players, experience the creature.

The descriptions can get long, running a column or so for a room. Read-aloud, at four or five sentences each, is VERY good if a bit long. The DM text stretches for the rest of the column. It does a good job of using bold to highlight sections to help the DM find things, but does on too long in places. Evocative, but you could rip out about a third, padding, and not loose much. This is absolutely NOT a shit show of wall of text, it just needs a little help to go from “Very good” to that once Bryce standard: perfect. I suspect the non-english nature of the source text results in a this a bit, the mechanics taking a bit longer to get out than a native english speaker?

This is a good adventure, and I recall liking the previous offering from Geis Games also. I want to know more about the Hinterlands settings and the adventure path-is thing these are a part of. It reminds me a bit of those early chapters of the Mere of Dead Men adventures in Dungeon. The bleakness of the wilderness, people hanging on, and shit about to GO. Down.

This is $2.50 at DriveThru. The preview is good, with it, starting at page three, showing you the dungeon proper. I like the page 3 “general dungeon text” in the right column, especially, to set the mood.
https://www.drivethrurpg.com/product/227738/Grave-of-the-Heartless?affiliate_id=1892600