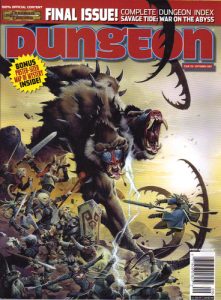 I made it. I fucking made it! I’m not proud of the lack of analysis some of these adventures got, but, fuck man, THEY SUCK.

WoW! A non-shitty adventure in the final issue! A three level dungeon with seventy rooms, maps that are not terrible, terse read-aloud AND Dm notes AND introduction. The encounters are good: search a chimney and be in danger of rubble falling. A hat box with poisoned string tying it shut. Gold dinner plates covered with yellow mold. There’s an interactivity here that most adventures miss. Attacking a zombie in room C can draw zombies from room D. This thing is constructed, and constructed well. The read-aloud is not evocative, AT ALL. “The chamber contains a large amount of trash, but nothing else.” is not the height of prose. Or “The room is filled with boxes and crates of many shapes and sizes.” But, at least the read-aloud is only one sentence. I could quibble with some encounter choices, like the carrion crawler in encounter 1 that attacks if you come within 20 feet of its lair. This feels forced to me and I prefer a “curiosity killed the cat” thing where it attacks if you disturb its lair. But this is petty of me, and there’s certainly rooms for both types of encounters in the world of D&D. This adventure is worth having. I love the introduction to this adventure, short, to the point, and with advice like “the town is full of wild rumors about Bargle.” Maybe a line or two about personalities of the notables, but otherwise this intro does a great job hitting the notable facts, orienting the DM, and keeping things short.

Well fuck. I think I’ve been trolled. I did some research, based on the designer’s notes, and … I’m not sure Jason wrote this? I’m a B/X Moldvay fan, so the history of BECMI is beyond me, but after digging in some I understand this adventure may be based on one in the DM’s book for the basic set? I guess this is somehow the basis of the internet’s obsession with Bargle … which I know nothing about?

Oh it’s fucking Eberron, for fucks sake. You know, I didn’t feel like this when Planescape or Dark Sun or Masque shit popped up; I wonder what it is about Eberron? Anyway, this is just a confusing mess AND linear … quite an accomplishment. Chick is marked for murder by a psycho, and several linear encounters follow as you protect her and track him down. There’s a house at the end with a bit of a creepy vibe going on, but it feels forced.

Prince of Demons
By Greg A. Vaughn
Level 20

The final adventure in the Savage Tide adventure path. It’s just a bunch of overwrought set piece garbage trying to build exciting shit but burying it in TONS of text. There’s some decent roleplay opportunities at the start with the allied demon lord armies, but, again, its buried in confusing text. Jessu Christo, learn to use bullet points!