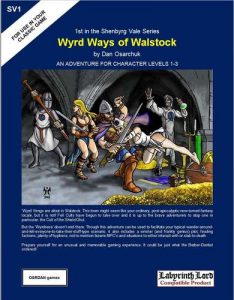 ‘Wyrd’ things are afoot. This town might seem like your ordinary, post-apocalyptic-now-turned-fantasy locale, but it is not! Fell Cults have begun to take over and it is up to the brave adventurers to stop one in particular: the Cult of the Shield Ghul.

This 32 page adventure presents a timeline of a cults attempted takeover of a town. The cult has a timeline of activities and the party will, hopefully, get in the way of a few of them. At the end of the third day there’s a percentage roll to determine if the cult thinks its been effective in its lead up activities, and if they proceed/succeed. It presents a great D&D town, full of the oddities and character that I like so much, ala Pembrooktonshire and Marlinko, with the more out there elements of those filed off. It could use a reference sheet for the NPCs, and some names, in addition to numbers, on the town map. It uses, though, a pretty focused writing style that concentrates on gameable detail, with few exceptions. It’s a good town, and a decent series of events in that town.

What this adventure does, that so many fail at, is to provide the correct amount of detail, the correct amount of GAMEABLE detail, for the locations. There’s enough here, and its generally written well enough, to spark the DM’s imagination and allow them to fill in the rest. It relies on strong situations, iconic and stereotypical stretched just a little more. In one vile inn the stairs up are listed as: “These lead to a series of rickety, filth-ridden rooms, rife with vomiting and diseased dregs and harlots.” Nice! No need to stat out each of the individual rooms upstairs; from this we can get a strong idea of what the upstairs is like and run it on the fly. I could quibble, about a couple of events upstairs, but the rest of the locations, most of the more common rooms especially, have a nicee series of events/tables already for adding little things. The back door to the place is “barely functional.” There’s a pig fighting ring. The drinks are served not in glasses but in a trough that runs down the bar. Odors of manure and ale emanate on the outside. Another Bohemian, sho is bedecked with flowers, crystals, and potent incense. I think we all understand what this kind of place has, with dreamcatchers and lace and the like. These are descriptions and locales that you can hang your hat on. Further, most of the locations are contained to a single page, or part of one, meaning little to no page flipping to make scanning the entries harder.

As a social adventure it has factions, something like eight of them. The cultists, a group of healers, an ineffectual town council, the tired corrupt guards and two main merchant houses/families … not quite alike in dignity.

The timeline is summarized, the locations generally cross-referenced for easy lookup in them. There’s an overview, with more detail, of the plans that you could read once and not have to refer to again unless you want. The locations have events, like pickpockets, being vomited on, an aging harlot, and so on. There’s a table of descriptions and personalities you can use to fill out random NPC’s as an idea generator for when the party acosta someone. It’s all great stuff. Strong imagery. Decent descriptions. Not too much filler.

It’s lacking in really strong reference material. The town map is just numbered. Looking up which places are bars, or inns, for example, means hunting through the pages looking for them and then looking at the (numbered) town map. This is a good example of where putting the place names on the town map would have helped a lot. Similarly, the NPC’s are all found in their “home” locations … scattered throughout the text. That’s not good for a social adventure where the party is running around, asking questions, talking to people, investigating, and so on. It needs one page with all of the NPC’s on it, where they are found, a brief personality/feature, and their goals. Those two reference sheets would have really kicked this adventure up to another level, making it very easy to run at the table. One of the nuns in the convent runs around in all white at night, on the rooftops, as LADY LIGHT, casting light spells and preaching the wonders of Minerva. That’s the perfect kind of thing to throw in at night to mix things up, but it’s hidden in the description of the convent and not right at the DM’s fingertips, staring them in the face when they glance down.

This is a good town adventure. It provides lots of memorable opportunities for play, without forcing them on the players or feeling too contrived. Formatting for scanning could be better, and it needs some prep work for the NPC’s and map, but then again most adventures so. The amount of bullshit extraneous text is minimal, and what there is of it usually adds to the local colour of the place. This is a keeper.

This is $6 on Drivethru, and worth the price of admission. The preview falls down some, showing just the general overview of the town, factions, timeline, and plot. This is probably the weakest writing in the adventure and only hints at the better things deeper in.
https://www.drivethrurpg.com/product/218261/Wyrd-Ways-of-Walstock?affiliate_id=1892600