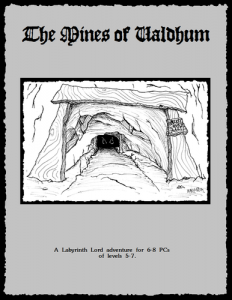 Nordriki, the northern kingdom of the land of Mithgarthr, has been relatively free of dragons for hundreds of years, but recently the locals have been reporting sightings of red, white, and green dragons all throughout the Drekiberg mountains to the north. Recently, a green dragon has taken up residence in an abandoned mine that is close to the city of Valdhum. The surrounding land is rich with wildlife for the beast to feed on, and the lair it has chosen is well protected and secluded.

This 37 page adventure details five levels of a mine, with about eleven rooms per level, as well as a separate abandoned complex/level with another ten or so rooms. It’s got a German/dark forest vibe going on that I can get in to, as well as interesting encounters in the mine. There’s a variety of hints, things to talk to, stuff to explore, and trouble to get in to as you delve deeper to find a dragon to slay for the townfolk/reward. The encounters, both empty and not, are solid, but the adventure needs more focused writing to turn it in to something special. It manages about seven rooms per page, so it doesn’t drone on, but with some focus this could be a REALLY good delve.

The intro/hook is too long, but it IS good. Bear-people tribes live in the forest. If you travel to the town at night you get attacked by them. In town you find out killing them is trouble, as it riles up the tribes, which are under pressure anyway from game being eaten by a dragon that just moved in to a mine/quarry nearby. Thus you are tasked, either as penance (if you killed them) or as a reward to stop the dragon. It’s a nice geopolitical hook and makes sense. It ties in with dark forest vibe thing, which is strengthened further by an encounter with an “evil tree.” Notably, however, you can dig up the tree after killing it to find a buried chest with loot! This pulls HARD at my love of folklore-ish callbacks in adventure.

The mine proper is, well, a mixed bag. The map is linear. VERY linear. It does a good job of noting room features, uses color, and has slopes up and down, but a more interesting map would have done more. Five levels is a lot of room to play with, vertically. Being shoved down what is, essentially, a straight line hallway/path doesn’t do much to enhance the fear of the unknown, tactical, and exploratory things that a more complex map allows.

The room encounters, proper, set up interesting situations. There’s an old mine office with a lockbox with gold nuggets/ore in it … along with the weakened poison trap guarding the lock. There’s a kitchen with a pot growing yellow mold. Disturbing the chimney means disturbing the bats in it, which will knock over the yellow mold pot. These rooms makes sense. There are multiple things going on and it doesn’t feel forced. There are goblins, manning a barricade on an offshoot passage, who can parlay with the party, just wanting to be left alone. There’s an interplay between the rooms, with several empty rooms providing clues, or at least foreshadowing as to whats to come. Warning signs, in the form of heads on pikes, and bones telling of backstory THROUGH THE ADVENTURE. What a concept … The levels are themed, from old mine to sacked cult temple to trogs, to the dragon and so on. The type, variety, interconnected nature, and multiple things going on are all playing in to an environment that feels REAL. Thought was given here and it FEELS natural rather than forced and created. Someone gave some thought to this, but still kept things simple.

It doesn’t meet my standards for a good room description though. I’m looking for something evocative, that scans quickly. While the IDEAS are good, the writing could be better. “A wooden structure has been built in this room” or “this room appears to have functioned as the foremans office” are neither great descriptions. “If the desk is thoroughly searched …” betrays a conversation if/then style description that loads it up with text that makes it harder for a DM to find information. The information transfer beyond the encounters is not great and what there is is frequently not evocative. Almost … “this mine shaft is littered with desiccated woodland animal corpses” betrays spiders nearby. That’s not too bad; a little plain, still, but not bad.

For its problems with information transfer, I’m fond of this. Multiple levels, a great mix of encounters, a dark forest vibe … this one is close.

The PDF is $5 on DriveThru. And, glory of glories, the preview shows you writing! The first page, room 7, shows you the dessicated woodland creatures, and the next the strong odor of death.https://www.drivethrurpg.com/product/128706/MELL007-The-Mines-of-Valdhum?affiliate_id=1892600

7 Responses to The Mines of Valdhum