The Secret Machines of the Star Spawn 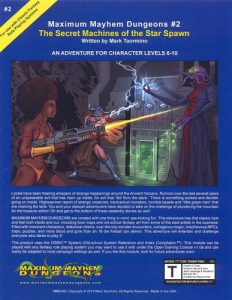 Locals have been hearing whispers of strange happenings around the Ancient Volcano. Rumors over the last several years of an unspeakable evil that has risen up inside. An evil that “fell from the stars”. There is something wicked and devilish going on inside. Highwaymen report of strange creatures, mechanical monsters, horrible beasts and “little green men” that are roaming the land. You and your stalwart adventurers have decided to take on the challenge of plundering the mountain for the treasure within! Oh and get to the bottom of these dastardly stories as well!

My life is a living hell. This 44 page “adventure” is a linear railroad with aliens and technology. It’s written like your 7th grade dungeon master created it: adversarial with lots of tits. I actually went and looked up the designer to make sure it wasn’t the FATAL guy. It’s not. But he did make $3k from the kickstarter for this, and $11k from his latest kickstarter. This piece of shit is the closest I’ve seen someone get to WG7. I often cite expectations, and have a strict taxonomy. Put another way, I don’t give a flying fuck what you publish but you damn well better do a good job disclosing what it is so we don’t have to buy your crap.

I am supposed to start off saying something nice. The highlights. I’m struggling. It’s got a decent number of new monsters, themed to the adventure, nicely illustrated, and most with some interesting themed effects. One of the aliens has a “brain freeze” power, for example. One or two of the room descriptions, in read-aloud, are not terrible. A few of the encounters have an interesting set up. There’s a robot head you can pick up who talks to you and can operate technology/explain things. You can find his body parts and rebuild him. A somewhat interesting little NPC, a fun little side-task to accomplish. That’s good. One or two of the rooms have a decent description, like the room walls made up of thousands of gears of different sizes and directions and speeds, with a large black lever in the middle of the room. Jokes on you though, that lever, and entire room, does nothing. It’s just there to fuck with the players. Most of the descriptions … functional? But they tend to digress to being overly descriptive and long. In other words, the first couple of sentences gives a plain fact-based description of the room “This is a huge two hundred foot wide cavernous volcano chamber. It is divided by a jagged chasm where lava now ows. It is about forty feet wide and the lava ows into the deep underground realms beyond the volcano depths.” Functional, but not necessarily exciting. But then it goes on to describe more and more and more instead of just stopping. And that room is one of the shortest descriptions. The read-aloud can go on for paragraphs. Or columns. Or, in the case of the introduction/background: pages. This overly prescriptive description issue is key indicator that things are not in Adventureville.

And well they are not. The start map is a single linear hallway with rooms either hanging off of it or the hallway running to the rooms. No choice or decisions. The rooms are even better. Every one of the starting rooms. Six of the first seven rooms have monsters that either attack immediately or attack within one round. This is not an unusual occurrence. You walk in to a room you can’ avoid and the monsters attack immediately. That’s not a D&D adventure, that’s a caricature of a D&D adventure. The room encounters support this. “As the players enter the room the door they came through disappears!” We all know why, right? Because the designer has some “clever” or “fun” encounter that he wants to force the players into.

There’a creature you fight, the Dungeon Breaker, that, as far as I can tell, is never described anywhere.

Up until now it’s just a bad adventure. Too much read-aloud. Linear. Almost nothing besides straight up combat. You could mistake it for a bad 4e adventure (or pre-DCC RPG Goodman adventures …) or something created by a 12 year old jr high kid. But then that 12 year turned 13 and hit puberty. And inflicted himself on others. The issue is not the prurient humor, or the tit-heavy sexualized art. I like to think of them as an exponent. If a good adventure is a “1” and you get a point added every time you do something crappy, then loud belches and cheescake are en exponent. 1, squared is 1, still a good adventure. 5, squared, is 25. It’s the icing on the cake that sends you in to suger coma. “Chocolate Thunder” is a black woman with a large afro in a tiny bikini who yells “Watch it sucka!” Ain’t nothing wrong with any of that. Everyone should have the balls to pull off that kind of style. But when in this shitty adventure its clear what the intent it, and it’s not positive. Likewise the tit-heavy gypsies. Or the mind flayer grabbing a womans tits with its tentacles. Or “the fat princess”

The preview on DriveThru will show you the art sample, as well as give you a hint of the humor style in the start of the barons page and half read-aloud on the last page of the preview. I’d read that last page, just to lighten up your day. https://www.drivethrurpg.com/product/164416/The-Secret-Machines-of-the-Star-Spawn?affiliate_id=1892600

15 Responses to The Secret Machines of the Star Spawn