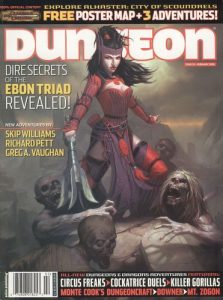 The Beasts of Aulbesmil
By Skip WIlliams
Level 3

Nice to see Dungeon back in the business of publishing crap. You’re in a village for some lame pretext (an old friend is gone. The church has asked you to investigate … or the baron hires you to find his kidnapped son because his men might be recognized, which is a decent hook.) People have disappeared. Everyone thinks the miller is evil and is behind things. If you go to the mill you are attacked by the evil wererat miller and his thugs. Orcs in the barons hunting cabin are in league with the miller and hold the son. So you show up, get a miller clue, and confront the bad guy in the first ten minutes? “You go to the grocery. Everyone gains two levels.” You do, however, get to learn ALL about how the wererat committed his thefts and murders. Useless information. History and backstory are so seldom of use. The fetish around novelization is depressing.

The Hateful Legacy
By Greg A. Vaughan
Level 12

This ‘Lost Valley’ adventure starts with an attack by an awakened dire ape ranger. And that, alone, was enough to let me know how this thing was going to go. A society of warrior ogres guards the entrance in some kind of watchtower at a chokepoint. (Which might actually have been interesting, but I can’t for the fucking life of me decipher the map. I THINK the entrance MIGHT be area 7, but that doesn’t make sense either … Anyway, it has two more set pieces after the first two and then you get to pick up a bunch of coins in treasure. Joy. The whole transition from adventure and wonder to set-pieces with columns of pages of tactics has been more than a little disappointing for me. The mania to constrain the DM with rules was not a good path.

The Prince of Redhand
By Jesse Decker
Level 15

And then there’s the eighth installment of Age of Worms. Only four more after this. This is meant to be a social adventure. You need to talk to an elf, and she lives in a bandit town. Once there your only opportunity to talk to her is at a dinner banquet. There is a small dragon lair some Ebon Triad nonsense to go kill, if the players insist on stabbing someone who’s not a commoner. Rather than integrating the social aspects in the adventure, or integrating them in to other episodes, they instead have “the musical episode”; disappointing. Getting through the front gate takes a page of text to say nothing important. One event is “you roll some dice and regardless of the results you get an invitation to the banquet.” Another one is “you go to the elf house and get turned away at the door.” Maybe six “events” before the banquet and maybe as many at the banquet proper. The banquet has a host of NPC’s, with appearances, personalities, goals and so on, but it’s all presented in giant text form … meaning you’ll need to take copious notes to run it. Tables. USE. A. FUCKING. TABLE. TO. SUMMARIZE. Ug. Anyway, the events are longer than they need to be, of course, and this being 3e they amount to little more than some skill rolls. That’s too bad. The end result is that the elf chick agrees to talk to yu in a couple of days … the next episode. The events here are little more than a railroad, both before and during the party. That’s too bad. There’s a nugget of interesting adventure here, with a social dinner party and wacky nobles from the capitol … fodder for a 1000 LARPs, but it’s awkward to run.