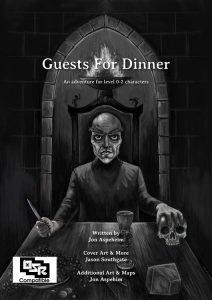 The ground collapsed and you fell into a cave, with no way of climbing up you have to find your way out through ancient catacombs. That would be bad enough even if the tunnels was not the home of demon worshiping cannibals, zombies and a mutated cat!

This short little ten page adventure has about eleven rooms of content on about five pages. It describes a small underground dungeon that is being used by a cannibal cult. It touches on some true gruesomeness that really brings home the evilness of the main villain. It’s also written in a mostly boring style that doesn’t really evoke the environment very well … at all. It’s pretty clear what the intent is, it just doesn’t get there.

While out in the woods, a sinkhole opens under you and you end up in a cavern, with no way back up. There’s a worked stone hallway leading out. Thus begins your adventure in to an Eli Roth movie. Walking around the complex you meet zombies, cultists, a prisoner, a demon statue with blood around its mouth, a pretty girl that’s been lobotomized, a villain that unfolds insectoid arms from his back, and a prisoner on a butcher table that’s had his arms and legs removed, having been eaten earlier.

You know, I’m a fan of showing instead of telling. If the adventure said “Lord Vazzo is evil” the players would hack him. A demon altar with blood on it? Ok, sure, he’s worshipping evil, but maybe it’s animal blood. They might let him off. Showing the players the girl he lobotomized and then showing them the prisoner they ate limbs off off, Cormac McCarthy-Road style, will REALLY cement Lord Vazzo’s sins in their psyche. This is an excellent, if gruesome, showing of evil instead of telling of evil. You don’t need to be gruesome, but it’s hard to argue that Lord Vazzo is evil after some encounters like this one has.

Vazzo is a non-standard villain, with insect legs that unfold from his back and a demon cat. Those touches are appreciated since they take what could otherwise be a boring old NPC evil bad guy and weird him up a bit. There’s also a prisoner to free and a demon state that you can pour blood in to the mouth of. Just enough to weird the place up a bit.

Unfortunately, the writing is not very strong. “Boring”, would be a better description, with only a few exceptions. The pool of water you fall in to at the start is “Really cold” and “very deep.” A table is described as being “a nice table.” Really, very, nice: these are not descriptive words. They are generic and don’t paint a good picture of the scene because of it. Ice cold. Bone chillingly cold, rattle your bones, bottomless, gleaming antique … these are all better descriptions than nice, very, and really … and I would continue to remind everyone that I SUCK at evocative descriptions.

While a scriptorium is “sparsely furnished with wooden benches and desks”, a good, terse description, others drone on and/or delve in to trivia useless to the room. “Some of the zombies Vazzo uses as patrolling guards are becoming too rotten and have left stinking trails in his library. He now keeps them locked up in here until he can decide what to do with them.” This tells us nothing except they are rotten, which could have been with a shorter and more evocative monster description. The descriptions are mostly boring, being medium-length descriptions that describe typical examples of a room of that type. Oh, look, a normal dining room. Noting the exceptions I mentioned, everything else is just flat and boring.

It does present some simple & short rules for Level-0 funnels for D&D, and a very small village description, four shops, with about one sentence each. A nice terse short village. A little short, but at least one of the descriptions has an interconnection to another shop. A couple of people in the dungeon have ties to the village; this should have been mentioned up higher so the party could encounter them before their horrifying reveal.

The two-page sample on DriveThrough will show you the very brief village and funnel rules, but unfortunately you don’t actually get a sample of the room encounter style.https://www.drivethrurpg.com/product/208969/Guests-For-Dinner?term=guests+for+dinner?affiliate_id=1892600

5 Responses to Guests for DInner