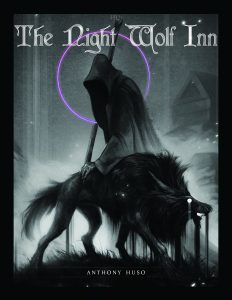 By Anthony Huso
Self Published
AD&D
All Levels

Once, a designer told me: “More is better, right? I mean, better to have it and not need it!” Not, I reply, when it makes the design difficult to actually use.

It is an Inn, a tavern, and a universe unto itself—a place of powerful dweomers, secret doors, lost gods, hidden dimensions and dangerous artifacts. Behind the sand box experience is a back story & a mystery. Players never need solve this mystery, but it is the glue that holds the experience together.

This 190 page supplement, found on Lulu, describes an interdimensional inn. It can serve as a kind of “home base” for a party. Over time, as the inn reveals its secrets, it becomes both a tool for generating adventure seeds and, ultimately, maybe, the outline of a TRUE high-level AD&D adventure. One of the few, ever. And I don’t mean “Q1” hight level, I mean REALLY high level.

The inn is extra-dimensional and the entrances/exits are in several locations at once. Further, there are multiple exits to other planes. The rooms, both common and private, number about a hundred, and include about a twenty “other plane” areas, similar to what’s found behind the doors in Q1, but expanded a bit more. The rooms range from about a half page to around a page each and take up about a hundred pages of text, the rest being monsters, backgrounds, NPC’s, and explanations.

The inn can serve as a home base for adventurers, ven across campaigns from one to another. It’s a nice adventurers locale and place to take your hat off and engage in that carousing table, perhaps. But, it also is exotic enough to serve as a location to pick up hooks from other patrons in the inn. An overheard snippet of conversation, and so forth. But … it can also serve up hooks more explicitly. You can join the inns adventuring guild, which obligates you to performing some services for the inn. Why are you going on the adventure? Because it’s time for your two weeks a year of obligation, that’s why! In this way the inn is a decent home base for adventurers. The various rooms have enough quirks to keep the players a little interested, in a kind of Disney Adventurers Club kind of way. The rocking chairs on the porch continue to rock. The cigar box never empties, and so on. Of all of the extra-dimensional inns and home bases that I’ve seen/reviewed this is probably the best. (And I only say probably because I can’t remember them all!) It reminds me a bit of that Dave Bowman tavern/inn in the Darkness Beneath. The Deep Caves, maybe, was the level? But wait! There’s more!

And it’s the “more” that really sets this one apart from the est of the field. There’s this concept of Hidden Depth in dungeons/adventures. Theming of levels may be the most superficial hidden depth. After that might come slightly more complex hidden depth, in the form of a puzzle or some such to a different area. The NE corner has a statue that gives a clue to how to open a secret door in the SE corner of the dungeon, for example. At a step up form there is the infamous Kuntz hidden depth, which is how the term is usually used. A rose in one room has a dungeon on each of its petals that can only be accessed through some complex ritual, and so forth. And then, there’s something like happens in this adventure.

Paying attention pays rewards. As the characters use the inn they will inevitably discover more and more of its secrets. They will, perhaps, be drawn to the noise they hear coming from upstairs over the veranda and one day investigate. Or sneak in to the obviously open secret door behind the bar. There’s a LOT. Almost every single room has some sort of secret, and most have several. Some are simple. Some are clues to other areas. Some are devilishly complex. There is A LOT to explore … and a lot to get in to trouble with. The inn can kill, easily, even a high level character. Ultimately the most complex and in-depth of the secrets are related to the inns creation and its owner “The Master.” He’s lost something and most of the inn contains clues to finding it. Thus the ENTIRE thing is almost like an adventure outline. Various things within the inn may lead to other adventures. This entire section if both an outline and highlight specific. What you need to achieve is highly specific, particularly as it relates to things WITHIN the inn, but parts outside of the inn are more of a sketched outline of goals and objectives. And it can all be pursued, or not, pretty much at the leisure of the players. Thus the diversions and interesting little bits of the inn, a place to goof off between adventures, can become the main focus after a while … if the party is inclined to do so. As an inn, this is great. The party will visit time as again, as their home base, giving the various aspects the ability to stretch their legs over time and be integrated in to the game.

There is a lot of mystery and wonder to be found in the inn, both important to a location like this. Various aspects of it, the imagination behind it, feel very OD&D. That sense of the unknown and the non-standard is to be found in abundance in this. Wall panels that turn in to seven thousand vipers. A secret room that turns you in to a skeleton for a thousand years … which only a day for the other party members. The designer makes the imagination and the non-standard. It is this idiosyncratic nature that gives the inn a vibe of both a real place and a place thar the adventurers will want to return to.

This is HOPELESSLY an AD&D adventure. While it does have that sense of imagination and wonder that is hallmark, I think, of the early OD&D days it also is quite purposefully presenting it as an AD&D adventure. Mechanically. The impacts and results and details are all VERY mechanically dense, in the 1E sense rather than the 3.5e sense. Mechanics are described. In detail. This is supplemented by a verbose writing style and a use of whitespace that I think sometimes works against readability. All of these, together, are the reason for the half page to full page room descriptions in the adventure. The third room, the coatroom, is 10×20 feet. It takes over a page to describe. This isn’t because of he read-aloud but rather because of the (loose) writing style and need to describe the rooms mechanics to the DM. This is, I think, because of the authorial vision. Not just a need to describe the mechanics but to get the intent of the author across. I get this. I think it’s interesting to know what the author intends. I also think that the verbosity that incurs from this makes the product hard to use.

The read-aloud is also a bit of a let down. For the aforementioned coatroom we get: “A dim hall set with two doors and an open archway has been fitted with numerous racks and hooks for coats, scarves and the like. There are two taxidermy umbrella stands made of elephant feet. They appear ghastly in the faint rays streaming from a small rose window in the south wall.” This is all very fact based. It’s also very straightforward without invoking the sense of wonder and awe that exist in many of these rooms. We know what a coat room looks like. The umbrella stands come off a bit flat. It’s not that it’s bad, but rather that it’s not very inspiring to the DM … for a location, the inn, that is very much mysterious and inspiring.

This is the sort of book that you need to use as a reference at the table, that you can mark up. Making notes in it, adventure after adventure, on what has happened and what the party has done inside. This is one of those products that you dream of finding. While at a con, digging through old boxes of adventures for $5 each, you come across this thing and know instantly you have found something special. A work of madness and genius. It just desperately needs a second edit pass. Given that major edit you would have something quite interesting indeed, from both content and usability. It’s maddening. It’s frustrating. It needs more NPC’s wandering through to dump in on return visits. I will also never give this adventure/supplement up. It can be the cornerstone and foundation of your game for years and years to come, providing your players something familiar and stable .. and yet filled with mystery … if you can exhume it form the density of words.

9 Responses to The Night Wolf Inn