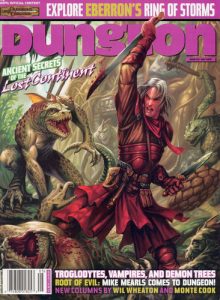 This is a strange kind of befuddled adventure. A lone adventurer died killing a mind flayer deep underground. The newly freed trogs slaves rever his body as a hero and want to give his body a hero’s sendoff: cremation. His kid wants you to go to the underdark and get his body to bury next to his dead wife. The 10 or so encounters to the trog cave are all rubble, shaft to negotiate and so on, which really only come in to play as set piece locations to use while the party is fleeing with the body. The cavern they live in is mostly empty, making a commando stealth raid mostly out of the question. It’s also all combat, with not even a word of advice to negotiation … just hack them down. There’s a weird faction in the trogs described, with chief and sub-chief, but there’s no opportunity to take advantage because of the HACK nature. And EVERYTHING is under a DC10 search check for a secret door … adventure blocks, even at DC10, are never a good thing. A more varied cavern, some roleplay with the trogs … that would have been much better.

A frustrating twelve room linear dungeoncrawl in three parts. You meet elves, some of who wish to avenge their dead father and want to come with the party to kill hobgoblins. There’s a nice “cursed wood” pretext to keep the elf warband from assisting en masse. This entire section of elves and forest is much longer than it needs to be, but it does present some interesting visuals with burning bodies and a gay elven camp after a battle. The dungeon has two parts: hobgoblin lair and then the sealed off portion with a few vampires … and the magic item from the adventure title. The dungeon presents some interesting scenes, particularly with a creature reaching up out of the well to drag a victim in to it. This “hiding in a hole” thing comes in three separate flavors, each with slight variations, and is a nice little addition. The dungeon, while linear, does have three separate entrances for clever players to find. It also places A LOT of the adventure behind choke point DC checks. To find the location of the wood from the hook, to be allowed to talk to the elves. To find the trap door in the ruins that hides the dungeon. These are (mostly) trivial … but choke point DC checks are NEVER a good thing, in spite of the advice to “get the players rolling dice.” The hobgoblin portion of the dungeon is better than the vampire portion, with more interesting things going on. If you can get past the linear nature then its not too bad …

A true piece of shit from Mearls. A giant tree grows in a city and destroys it. The party enters the tree and has six combat encounters. “Linear” doesn’t begin to describe this, the tree moves its internal passageways so the party MUST have all five encounters. While the tree moves the environment around to make the combats harder. Thus this “adventure” is nothing more than a D&D Miniatures ”campaign.” The destroyed city is given nothing, so it really is just the six encounters in the tree. It DOES offer up the Broodmother Skyfortress type destruction of a campaign city, and the plea for help from the Pelor cleric is nice, but the COMPLETE lack of pretext and bold-faced turning of D&D in to tactics porn and calling it an “adventure”? Fuck. You.