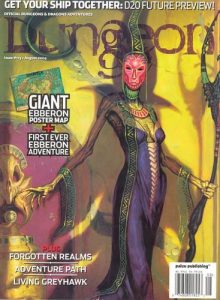 This adventure, with tie-ins to tiles and the D&D miniatures line, is a basic dungeon combat crap-fest with one notable feature: it has a couple of events outside of the dungeon. For some pretext of a lame hook reason (do gooder! Stop evil! It’s tonight’s adventure!) you’re poknig around in a dungeon. When you exit you’re approached by a man who wants you to find an amulet inside the dungeon for him. And maybe later you’re attacked in your inn, while resting from your dungeon, by cultist thugs and dragged back in to be sacrificed! This is nice. It shows the place as a living environment. People want things. People resent your intrusion. Hitting the party while they’re down is something from Rappan Athuk, Lich Dungeon, and many others. It integrates the environment. The dungeon, proper, is a piece of shit that is just “room with a pretext for combat”, one after another, with most creatures attacking immediately in a twelve room “branching off from one location” map. It’s also interspersed with nitpicky rule reminders. “Remember, you get a +5 to free from spiderwebs if you have your footing!” and “you get a -2 to stealth over rubble!” All of these are fine RULINGS and suck ass RULES. Fuck your rules mastery. Roll a d6 to save!

Jesus Christ, what a convoluted adventure. The party is hired by the .gov to investigate the disappearance of a local wizard, last seen at an inn. There they discover her aquatic-elf boyfriend was the last to see her. He’s been dominated by a mermaid vampire. As has his sister. Talking to the vampire mermaid reveals another clue to the wizards disappearance and a conversation to not kill her. After all, she lives in balance with the city nearby, only feeding on the poor and destitute. Following up (DC30 and/or divination magic) leads to a partially underwater lair. It’s full of zombie workmen overseen by lacedon locksmiths. And lacedon armorers. And lacedon masons. And lacedon … you get the idea. After wading through a shit-ton of zombies & lacedon and other undead you find the wizard and the guy who “kidnapped” her. Who is actually NE but a decent undead guy who single handedly saves the city on several occasions. The wizard has been visiting .. .maybe? To talk business with the dude. And the wizards plan is to find the right moment and steal the undead NE guy blind after learning all of his secrets. And if the party would kill the dude then it would be much easier for her. So, in the end, the .gov sent the party on a snipe hunt. The undead dude is interesting enough, but placed in a position to be pissed at the party and have his “workers” hacked through. The “not really captured” thing is ok also, but there’s probably not enough lead-in to realize that the N wizard chick is actually the tool of the adventure. More in those areas would have enhanced the adventure and made it a more role-play/things-other-than-combat adventure. I have NO idea how you save this thing though. It’s so intertwined that I don’t see anything other than the base concept (NE doesn’t meant mean enemy, wizard is a tool) being salvageable.

Ug. Adventure path. Oh, wait, this one is different. It’s mostly a series of mini-events, that go on too long. Last time you killed the beholder that secretly controlled the town. This time things are kicked off when you’re invited to a party to decide the fate of the city. The party is talked up during this section, giving them a sense that they are actually respected and their actions have had an impact on people’s attitudes. This is always a nice touch and gives the party a sense of accomplishment, I find. There’s a shitty reference table provided, for people you encountered in OTHER adventures, that doesn’t have much use, and the people who are actually AT this party are given LONG text descriptions. They are the ones that need the reference table. As is, it’s going to be note time. Extensive notes. The party is, of course, attacked. After that the volcano under the town starts to go off. This is the main part of the adventure. There are four or five sections to the town and the party needs to earn 16 or so “evacuation points” in each section to successfully evacuate it. There are a number of encounters provided, with only a few specific to the area of town, for the DM to throw at the players. It reads like a 4e skill challenge, over and over again. At best, you’re going to have to have like ten of these encounters. AT worst, you could be looking at fifteen or so. This drags out WAY too long, with suggestions to repeat events if you run out. The skill checks run in to the 28-35 range, which seems a bit high to me, but there ARE nice suggestions on how the party can leverage the crowds to accomplish their goals. The events range from people in burning buildings, under rubble, monster attacks, and so on. The entire thing ends with a red dragon attacking.

The events text is long, repetitive, and there are too many of them. The concept is good, but I don’t think it works as a standalone set of tasks. Integrated with some other task, like an attack on the town? Yeah. It’s too bad the party part is so bad.