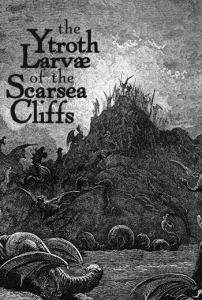 A ragtag group of adventurers delve into the mouth of one of The Ytroth Larvae of the Scarsea Cliffs seeking antideluvian treasure from underground civilizations!

This is a two-page adventure with three rooms that is more conceptual than product. It’s packed full of ideas but is severely constrained by the size. It’s too wordy for a 1-pager and there’s not enough content to sustain a more traditional OSR style game. This best way to think of this is that it’s a 2-page proposal of an outline of a good DCC adventure. Tends to weird. Good content. Rooms with things going on. And linear.

The idea is that every 50 years some giant larvae burrow up from underground and kind of beach themselves, like cicadas. Except they are HUGE … and they spent their years underground tunnelling through ancient cities/civs … so their guts are full of loot. The desperate descend on them en masse to try and earn their fortunes. As the first line of the adventure says “a low-level module for the despondent and desperate adventurer.” Thus the adventure provided is getting into the worm, traveling through its guts, and looting it from the inside. This translates to three adventure locales: the mouth, the stomach, and the heart.

Each of the three rooms, taking up about a third of the two pages. There’s a little read-aloud/inspiration piece of a sentence or so that does a decent job communicating a vibe. For the mouth it’s “A stench of moist earth and warm rot flows out between layers of needle teeth.” Not bad. Decent imagery. After this bit there’s a paragraph of other DM notes that does a good job describing what’s going on. Sunlight fading to darkness. Gems & coins just out of reach between sharp teeth. Cries of help from failed adventurers that have fallen in to the teeth. Precarious resting places amongst the teeth. And the threat of “scrapworms” roaming between the teeth, a kind of lamprey/parasite monster. Just impressions, and concepts, but LOTS going on, and each of the three rooms is like that. It does a good job of building up in the DMs mind the picture and painting it vividly, with few words. You KNOW how to run this room.

Following that are a few bullet points on dangers. These could be thought of as events, or things for the DM to take advantage of. A fallen adventurer cries for help while the lamprey worms crawl ever closer. The larvae flexes and the jostling is dangerous in the teeth section. Two monstrous molar teeth grind down near a a cache of loot. There’s are all about one sentence, two at most. Concepts. I love it. After that is a description of the monsters, without stats. “Medium damage, low health”, for example, along with a few concepts about them. “Follow the smell of blood. Eat stragglers.” and “inject sickness with bite, drag in to shadows.” I really groove on this sort of description. It help communicate the vibe of the monster and leaves the mechanics to the DM. I’m just going to ignore the mechanics anyway, if presented, and do my own thing in the excitement of an adventure, so I can appreciate that. The treasure section which follow is abstract for for the mundane loot: “2d4 gems” and so on. The magic trease though, is nice. A warhammer that can glow but needs to be recharged with the blood of a foe. A medallion that can crawl around and pick up loot, or “The High Prophet carries a bejeweled dagger that inflicts bleed damage and is masterfully crafted. Worth 20g.” Like I said, decent magic item ideas, but the mundane bits are off.

This is just a linear three room adventure. It’s packed full, conceptually, but it’s still just three rooms. This deserves more. An actual map, with choices, a shit ton more rooms, maybe a column or so on a shantytown nearby and/or complications from other groups/factions. I want more, which is high praise indeed.