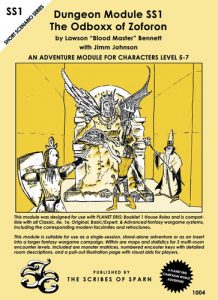 Through the aeons, a golden box appears from time to time to tempt the greediest of thieves and treasure seekers. Sages say the origin of that odd box is lost to the gulfs of time, but in the Scrolls of Skrel there is one account… When Man was new and Angels and Demons walked the world, a king arose, uniting the tribes, and waging war on Demonkind. This was Zoforon. Of such valiance was his crusade that the Angelic Order joined his cause. Thus began the age of the Holy Wars. Years of conflict became decades, and the decades beget centuries. The endless struggle ground Zoforon down, until finally he descended into madness. The Archangel, grieved by Zoforon’s fall, but fearful of the Demon magic he now possessed, fashioned a golden box in which Zoforon might be bound and forever locked away. But Zoforon was no fool. Facing hostile forces of Angels and Demons alike, he devised a trap to thwart them all!

This is a 32-page adventure where you’re transferred in to a gold box … a trap/puzzle dungeon devised by a long dead king. It’s not quite a fun house dungeon but more of a puzzle/trap dungeon that does a decent job of channeling the OD&D style … which I LUV. It has several clever mechanisms but it’s also more than a bit wordy … and it’s got the whole “puzzle/trap” dungeon working against itself. The entire genre has been ruined by mountains of shit which hides more decent entries, like this one. The whole “heres a hidden dungeon/sub-level!” thing is as cool as it ever was … I don’t know. It’s good for a puzzle/test dungeon … I just have too much trauma associated with puzzle/trap dungeon.

Good King Wenceslas (it’s the holidays, fuck off) has built himself a puzzle/trap dungeon and it shows up every so often to fuck with people. The result is a little gold box, lined with red velvet (which is how the interior of the dungeon looks) that you get teleported in to when you open the box and read the magic words. This continues a long tradition that has, in recent years, fallen by the wayside: the dungeon in a dungeon, or sub-level. Bottle City would be a decent example of this, but you can find a sub-level here or there in some of the megadungeons. Anyway, it’s a trap/test dungeon and King Asswipe is, unknown to the characters, at the center. The initial motivation is “holy shit, we’re stuck inside, we need to get out!” Not necessarily bad, if not overdone (and it’s not overdone here.)

At one point in the dungeon there’s a question: do you want to exit now, with no treasie, or go on and maybe get rich? This is handed in a kind of metal/DCC manner (which is ALWAYS a good thing… ) at least if you squint a bit. “Sign your name to the Book of Fates to exit ..” Handled right that would be a cool moment, and something to leverage for future adventure hooks. The explicit “you’re gonna get your asses kicked, do you want to go on?” is a nice DM’ing technique.Giving people explicit choices is a good thing.

There’s another aspect to this that I find interesting as well. One of the initial encounters is a kind of hall of mirrors … with a gold box on the floor … just like the one the party found and just got teleported in to. If you actually found the box then the party would discover that when the box is opened then the dungeon is reset. The party appears at the beginning again. Everyone is alive. Spells back. HP back. Monsters back again. It’s a complete “do over” mechanism. This, once again, matches the tradition of more liberal Wish-giving-out from older adventures. Wanna keep your treasure or wanna not be fucked up? Your decision Fighter-Bob. D&D is good when the party is making explicit decisions about what to do, knowing the consequences. You can push that too far, but I think you get the general idea.

The core dungeon is about four rooms, start to finish, if you do it in the most efficient way possible … a kind of shotgun shack of a hallway. There are a door or three hanging off of the hall, making for eleven rooms total. Only four of these have serious monsters in them, with three rest being some kind of trap or trick. In one room there are two strone thrones facing each other. One has a state of a mind flayer on it, holding a stone chest. If someone sits on the empty throne THEY are turned to stone and the mind flayer is turned to flesh. It’s the only way to get the chest. It’s a trick! It’s a push your luck/making an explicit choice for risk! It’s fun for all ages while you try to find something/one else to shove on the empty throne to get your party member back! This is a great example of a classic Weird Thing that appears in dungeons. I wish more D&D were this this playful and interesting.

The second set of rooms, if you decline to sign the book of fate, is linear with eight or so rooms. There’s a forced combat, but also a nice trick/trap rooms or two. In one room you’re directed to wear blindfolds. Inside is full of medusa and basilisk heads mounted on pikes. Wearing your blindfold? Yes? Imagine feeling your way around that room! Peeled grapes! Peeled grapes!

This is a nice little dungeon. The single column digest format, with wide-ish margins, does not lend to a terse feel. I’m not sure if a different formatting would help or if it needs a strong edit to reduce/focus the test. It certainly does channel OD&D, which is ALWAYS a good thing.

1 Response to The Oddbox of Zoforon