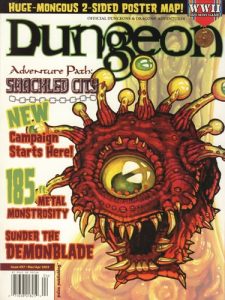 Side-trek. An eloquent group of disguised grimlocks (WTF?!) get the party to rescue their buddies from an ettin wight. Once they do so, the grimlocs betray the party and attack from both sides. Oh, the humanity! A group of monsters that betray the party! What fun that, eh? Truly Rob Manning is one of the most original designers on the planet. This kind of shit is what me say things like “Dwarf lepers? I mercilessly massacre all of them.” Fuck your bullshit, DM! Misdirection spell. Fight to the death. All of the usual crappy design bullshit is present. Six pages of crap.

Heart of the Iron God
By Campbell Penney
3e
Level 13

The party comes across a GIANT iron statue attacking a village and the dungeon are the levels inside the statue. This one has some bits of potential in it. The destruction of the village, and the chaos of the villagers, is glossed over where it should be a highlight of the start of the adventure. The gome engineers and hanggliding attackers are a bit of a style turnoff for me, but the adventure does many good things. A decent variety of the rooms are interesting, with things to play with, even though the combats in the rooms tend to be a little boring. More grinding gears and steam pipes and open access ports would have done wonders for otherwise boring old combats. The construct has a number of entrances, which is a very good thing, although there is more than a little gimping going on in the statue being immune to almost every useful spell. I really don’t like that in my adventures: the party should be able to use the powers they’ve earned. If it fucks up the adventure then you didn’t write a very good adventure. There’s a nice order of battle, for alarms going off inside and how the guards react, as well as a nice section on follow-ups after the adventure is over … which mainly focuses on rewarding the players and the feuding factions who want the statue body. That’s a nice touch, putting the party in respected positions and then swirling the chaos around them. The adventure text for complex rooms is quite long in places and badly needs pruned back, and the adventure does spend a fair amount of time on describing mundane rooms and items. On the plus side there is at least one area where you can NOT fight and talk. This is a decent effort for an Dungeon Magazine adventure

This is part one of the very popular adventure path “Shackled City”. CLocking in at 52 pages it’s pretty mammoth. It combines a simple two (primary) location investigation with two large (63 rooms and 34 rooms) dungeon levels. The investigation portions are ok, if overly described, with probably enough hints to get the party to follow the breadcrumbs. The city proper gets JUST enough description to make you want more and the extras presented, like some goons and the mayor’s office (a minor location) are just enough pretext to allow the DM to keep running. The town section, in particular, could use a reference chart of the NPC names & personalities. The church folk who hire the party, and give them healing, could also use some more personality since the party would presumably interact with them more. The inciting event involves a uniquely dressed thieves guild, and that’s an open point in the adventure. They are never really addressed even though they are the first bait the party receives. Not addressing or following up on them is a miss, from a designer standpoint.

The dungeons are pretty classic exploratory places, with a decent mix of encounters. It’s generally overly described and under specific, which leads to a bit of a bland feel to it. While there’s no organized response to the parties incursion (especially on level 2, the “lair” proper) it does have some notes about nearby monsters responding to light noise, in place. The ending has a beholder teleporting in, accompanied by an invisible wizard (classic “we need to explain WHY” bullshit.) The beholder wants to buy a small orphan boy from slavers. Since the party is after the orphans, this is probably going to be objected to. Thus the party gets to eat shit and let him take him OR the beholder gets to pull his punches, for some reason. This is not strong design. Far better for him to show up and just grab the boy and leave, eliminating this suspension of disbelief break.

The adventure outline is ok, and not really a railroad. It’s mostly just a pretext to get the party into the two dungeon levels and have some fun there, wrapping it in some slight pretext of an investigation and the cliffhanger mystery of the beholder. The dungeon is not a travesty but I don’t really feel it supports the DM the way a good design should. I suppose it’s probably as good as one can expect from this era of Dungeon.

A fiefdom has gone silent, with rumors of demons. The party go to the local castle and kill a lot of demons and slaad. The adventure might be thought of as in two parts. The intro and village and then the castle proper. They both suffer from a lack of specificity (most Dungeon Magazine adventures do, but it’s notable in this case because …) but the first part is quite a bit more … atmospheric? than the second. There’s a creepy abandoned village where terrible things have happened vibe to both the intro encounter and the village. It’s not followed up on wel (lack of specificity …) but it does a much much better job than most Dungeon adventures in setting a mood in the DM’s mind. The second half, though, in the the castle, fails mostly in this regard. It turns in to a “room with an outsider in it that attacks” kind of adventure. There’s an encounter or two with some potential, like the insane mother with her eyes torn out, infected, but again it’s a little too fact based and lacks specificity. There’s a hint of scene-based play in the village, with some programmed attacks, like when the party LEAVES the inn. It does have a nice side-bar with how to deal with high level magic, the advice of which is not as terrible as it usually is. I may not agree with it all, but it doesn’t gimp the players. Fixing this would be a chore, since most of the castle would need shored up, but it is a nice little read for inspiration.