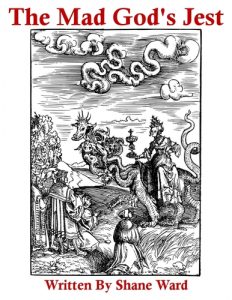 Deep inside the mind of Captain Sherborne, he’s cracked. His dreams haunted by a Harlot. However nothing is what it seems. He wanders the world looking for brave souls to help him. Will you?

It’s all a dream! Hahahaha! Just a dream! You can’t die! Hahahaha! Shit like this gives me a headache. It’s a 21-room cave complex full of bizarro encounters. There is a high point of two, but it’s too far disconnected from reality for me to embrace.

The hook is DM fiat: Captain Whoever has his crew kidnap you. He gives you a map to some caves and hires you to go into them and recover a boot. I’m pretty sure the boot isn’t in the caves. It makes references, obliquely in several places but never explicitly, to the fact the captain accompanies you. “If he dies” and “when he makes it back out” and so on. So it’s also an escort mission. If the captain dies you get to restart the entire thing, Groundhog Day style. How can this be? Because it’s a dream.

Consequence free adventuring. If you die you just wake up, XP intact. I hate this shit. It turns everything into Lacuna, or some co-op storytelling game. “Monkeys fly out of my butt because I’m an alien from Xrdoz-10.” This is the cheapest and lamest of all pretexts.
Oh, I get it. All D&D is a pretext. It’s just an excuse to sit around the table and have a good time with your friends. From that perspective, who really cares? The game is as serious as you take it. And yet … there’s some kind of suspension of disbelief that comes into play. I’m been arguing playstyles recently with designers who insist Different Strokes for Different Folks, so this is in the front of my brain currently. When anything is possible in D&D it turns it into Lacuna, it turns it into a storytelling game. And yet, w’ve chosen D&D for a reason. We’ve selected it because it has constraints and it has a DM. When those constraints are removed in a blatant way, as is done in this adventure, it’s a slap in the face. No, you’re not playing the game you signed up for. You’re playing this new thing. When the characters are kidnapped via DM Fiat it points out the man behind the curtain. When it goes all Groundhog Day it points out the man behind the curtain. When you wake from the dream after dying it points out the man behind the curtain. I don’t think this is positive, most of the time. Beer, pretzels, and the right mindset? Maybe. But that’s essentially justifying the existence of linear tournament modules. Yeah, they MAY have a place in a certain niche … but couldn’t you just try a bit harder and do something better that doesn’t have those limitations instead of just slapping on some pretext to justify the decisions made?

The encounters, proper, all have two notable features. First, they are the very definition of Funhouse. Second, they are aggressively exhibit based. The first is pretty easily described. There’s a room with a hot tub. There’s a room inside an ice block with a giant cooking the captains brother over a pit/spit/fire. There’s a torture chamber where cultists go to torture themselves. A pool of lava room. A jungle room. A mushroom room. It’s just a series of encounters with nothing to interconnect them except “it’s ostensibly a cave complex.”
Secondly the encounters are all aggressively exhibit based. What I mean by this is that they are all things you SEE. There are no hints of reaction. There are no defaults in the encounters. And I saw “aggressively” because I don’t think I’ve ever seen a dungeon. The Pool of Lava room is a good example of this: “There is a large pool of lava in the centre of this room, the pool is manmade (amazingly enough the lava has not eaten thru the floor! into the tunnel below). The room contains 4 madness cultists that are being fed strange colored soup. A manticore feeds them, and yells when they spit out the food.do this before so thoroughly.” That’s it! You get the manticore stats and a list of treasure. It’s like a little Vine movie playing in front of you. It ignores the fact that the dungeon exists for it to be experienced BY THE CHARACTERS. The complete lack of reactions is more than a little off putting, so I hope you’ve got your reaction roll table on your DM screen.

This one is weird. And not in a good way. Not in a bad way either, but it’s going to REALLY take the right mindset to make something of it.

8 Responses to The Mad God’s Jest