Vault of the Faceless Giants 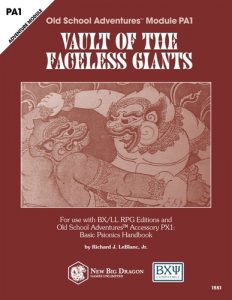 In a jungle village a complains that her baby has been taken. A lot of the villagers think she abandoned it in the jungle or a tiger got it. Individually they come to the party to relate rumors of an evil temple in the jungle. Inside is a dungeon with some psionic properties, if you are so inclined to use them.

This adventure is in a fifty-two room dungeon with a largely ring layout, symmetrical. It has a weird vibe to it. It has a lot of the elements that I would expect to find in an old school dungeon, but it is … plain? Boring? The writing here just doesn’t grip one very strongly. I’m also VERY suspicious of the ring hallway layout. Combined with a few other elements, I just can’t get into this.

The biggest problem with this adventure is probably the writing. I’ll cite a couple of specific examples of it being non-specific, but there’s something else going on and I’m not sure how to describe it. The writing is … technical? It’s very straightforward. It’s pretty clear. And it’s generally boring. I can cite a couple of examples of abstracted descriptions, like a bow that is described as “amazing craftsmanship” or a dagger that is described as “particularly well taken care of.” These descriptions are abstracted. They are conclusions. Rather than describe the dagger, or bow, and letting the player draw a conclusion that they are well taken care of (and therefore special) or of great craftsmanship, instead the read-aloud makes that conclusion for the party. This kind of genericism is the opposite of ecovative writing that inspires the DM and/or players. There’s something else going on with the writing though and I’m having trouble really putting words to what the issue is. The descriptions are boring because the writing style is just not exciting. Is that the right way to say this? Not dynamic? Not inspiring? I don’t know. It’s technical, and the elements are all there, and it doesn’t necessarily fall in to the trap of describing the mundane, but it doesn’t really make me excited to run the rooms either.

Here’s an example. It’s a little heavy on the number specificity (which I don’t think is appropriate in read-alaoud in particular) but that’s not really the problem: “48 straw mats are arranged in a 6×8 pattern in this 30’×40′ room. The walls are painted golden yellow, save for a large white symbol painted in the center of the west wall showing the symbol for the third/plexus chakra.
In each corner of the room, set on the floor, is an ornately-carved ebony incense holder featuring a seated figure. The room is permeated by the scent of lemon and myrh.” It’s an ok description. But not a great description.

Some of you may recall the chess-players room in the Dwimmermount draft. The room had two ghostly players playing chess. They ignored the party and you could not interact with them in any way. There are some of the same sorts of rooms in this adventure, rooms in which there is trivia rather than something to interact with. I’m not going to assert that every room has to be to fun and exciting, or that dungeons have no room for mysteries or empty rooms. This is something else. It’s presenting something that COULD be interesting but without any elements for the players to interact with or use the room. One of the early rooms in the dungeon has steam in it, that comes in through cracks, doesn’t go into the hallways, and dissipates, with the effect having a random chance each time the party enters. That’s it. This isn’t hinting at a volcano or steam later on. It’s not a terrain effect for a challenge. It just is. This is only one example. Murals and funerary are steam rooms are fine, but they need to contribute to the adventure … and these do not.

I am QUITE suspicious of the map as well. It’s symmetrical, and I’m not a fan of those, but the bigger issue is the ring nature of it. Imagine a long hallway that forms a circle, and bisecting the circular line are rooms. You must go into the rooms to walk the hallway. That is, essentially, the dungeon and it is, essentially, a linear layout, with all the faults and lack of options that come with that sort of design. There’s also a large number of monsters, humans mostly, that come out of suspended animation to attack the party, another element that I’m predisposed to enjoy. It just seems lazy. Combined with several other rooms where the read aloud has the monster immediately attacking, it’ just doesn’t seem interesting.

There are more than a few unique magic items, and some of the items descriptions ARE decent, like a +1 dagger with an ivory handle in the shape of a serpentine dragon with red fringed silk tassels. That’s something worth keeping, if you’re a player. It’s also got a classic set up or two like a giant spider guarding a gem. Those are all great examples of doing things well.

I just can’t get into this one.

1 Response to Vault of the Faceless Giants