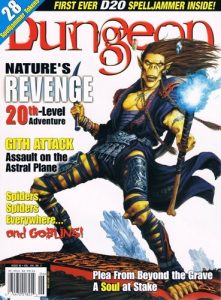 So, here’s a poser: is Dungeon Magazine a poetry magazine or a house organ? By this, I mean does the magazine staff have a directive to preserve the author’s writing, no matter how bad, or do they have an obligation to publish something decent? Yes, I’m being hyperbolic. Either the staff didn’t know what a good adventure was, or they felt a need to preserve the author’s voice or they just didn’t get enough pages to fill the magazine and took anything.

Thirty pages for an “empty rooms” adventure. Generic hooks send the party to a fortress/rock on the astral plane. Right after they arrive some githZ and githY show up. FIghts happens. Then the current owner of the fortress shows up and attacks everyone. This thing has almost nothing going for it. There’s nothing special about the fortress, and almost all of the rooms are empty, so it’s not really an exploration mission. There’s a timeline for the three factions, so it does have that to help things out, but the factions are all essentially mad dogs, except maybe for the Z’s who will at least talk. Otherwise it’s all “explore empty room and get attacked by a roving band of gith.” Long descriptions for empty rooms and trivia about Gith culture means Frustrated Author rather than Fun Adventure. Travel to the fortress/astral plane is glossed over, and the monsters take at least half a page each to describe. Wasn’t there an OSR adventure about a pass with crystals and factions in it and and old battlefield? Go get that instead. (dammit! I can’t find the name!)

The party tracks down some goblins in the mountains. While travelling in the mountains the party stumbles upon some bickering dwarves with a dwarf body from their recent goblin ambush. The party can return the body or find the dwarves taken prisoner. The mount is, essentially, a pointcrawl, since it’s hard to get from place to place except along the narrow paths/passes. It’s got decent wanderers with a lot of personality, and a very nice “old map” the party finds that goes along with the DM’s map. The encounters have some decent variety, although the suspension of disbelief is pushed at time. (“When the party passes they have no chance to spot the hidden paths the goblins use to ambush them.”) This isn’t a stellar adventure, but it the wordiness were resolved then it would be an ok adventure with decent variety and choices. Also, Thomas Jefferson owned slaves. And this adventure ain’t Thomas Jefferson.

Return of the Blessed Damozel
By Frank Brunner
3e
Level 11

Side-trek. In a city park the party finds a woman berating a tough looking kid. Her dead daughter, his ex-lover, wants him to turn from his evil (Thug Life!) ways. The party can help convince him. Regardless, his friends (6 3rd level fights) show up to prevent him from leaving the gang. The rakshasa gang leader may show up also, which is why, I guess, this is level 11? Gang war in a park, all Sharks & Jets or Warriors style, woudl be cool, but that’s not really what it going on here. A mashup of this, the gith warfare adventure, and a good adventure would be cool. Rumble in the city park!

The Razing of Redshore
By James Jacobs
3d
Level 20

“Awakened sperm whale druid” wages war against assassins guild, destroying overly-described town. After four attack events the party meets the whale in event five, followed by exploring a five room underwater cave, the guild headquarters, and then a final assassination attempt on the party. The town portion is mostly meaningless, except for a couple of clues, and doesn’t justify the pages spent on it. The events are ok, I guess, if the party is using divination to explore the town for clues, as ways to introduce some life into the adventure. The caves feature a level 9 cleric gargantuan kraken and are not TOO bad. The guild fortress is an excuse to have a lot of assassins using their death abilities on the party. “Four assassins all do death strike on you, mr crappy saving throw. You die.” Good high level adventures/challenges have always been a problem for D&D.