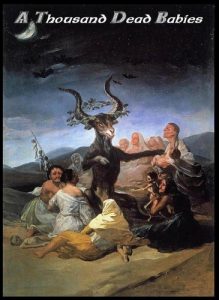 A small little town in the grips of some religious turmoil. It switched to follow the Holy Church about a generation ago, throwing o their ties to the Old Gods (mostly). There are some hold outs. Recently however, tales of demon worship and witchcraft have begun to ourish, leading the young and inexperienced priest to enter a panic.

This delightful little gem describes the goings-on around the village of Corroc. It’s a small little village that could be used as a starting location or as a place the party is passing through. This place is a powder keg. There are a lot of factions running around and the NPC’s have enough life in them that a little of fire, say, from a party of murder hobos, is going to set the place off. Devil worshipers, pagans, the church, local lords, illicit affairs … and the cried of babies from the woods at night … You need this little gem in your life. It’s duel-stated for OSR & NGR in a kind of minimalist way … the way I like it.

The village is only briefly described, in a paragraph or so, with about another paragraph for a nearby village. It’s got a Harn-like feel to it … if Harn villages were full of gas and kids playing with matches. I like this kind of realisism, that’s relatable, without all of the slippage in to the NoFunZone that realism can frequently slip in to. Reeves. Asshole lords. Taxes. Intra-village gossip. You then get into the heart: the eight or so NPC’s that generally drive the action in the village. The NPC’s get about a long paragraph each, and the paragraph has a little about their personality and a little gasoline. The personalities are great, and generally thread in to the gasoline. For example, the smith is 15 and new to the village. He’s not very good, but doesn’t tell anyone that, faking his skill. To directly quote: “He is desperate for business and will tell the players anything he thinks they wish to hear to try and encourage them to buy or commission something from him. This includes implying people may be witches, especially if he thinks the players will then want to buy hot irons. He can make those.” Oh my goodness! And the village priest is good-hearted and rational. And having an affair with a local farm girl, sneaking around at night. And her father will disown her if it he finds out. And the local herbalist is old, has red hair, is a wise woman, is a loner, has a black cat, and the village thinks she’s a witch. Except for the priest, who is rational and knows these are just stereotypes. Except she IS a witch! And it goes on and on. I think anyone reading this now has a head FULL of ideas where some of this can go, and that’s only three or four NPC’s. The NPC’s focus on the the personality quirks and situations that the can drive the characters actions, instead of just being trivia the way they are in most adventures.

The location descriptions are likewise evocatively written (with a couple of exceptions) and serve to fulfill EXACTLY what you think they should, again with the focus on character interaction and how they will encounter the location.

Magic items are all unique. Bones. Spellooks with tattoo’d skin in them. A pouch full of teeth. A rose that’s ever-fresh and impacts spellcaster. A cursed wicker baby basket that creates a newborn baby every day … fuck man! That’s AWESOME! Think of the possibilities of that coming in to your game!

Speaking of possibilities, one column of the text describes the aftermath. What happens if the party destroys the cult, or the pagans, or the church, or some combination thereof. And again, this ain’t just trivia. Enemies, allies, land, a town cursed forever more, brutal knight justice.

I love this thing. Simple. Short. Sticky. If it has a problem then it may be the need for a few other things going on in the village, some way to bring all of the other people to life while the party is out getting into trouble with the main NPC’s.

5 Responses to A Thousand Dead Babies