AA#12 – The Barrow Mound of Gravemoor 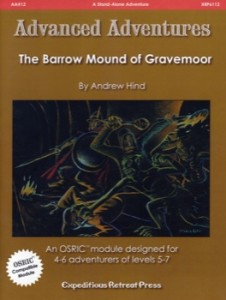 This one is goood. Let me say right up front that I like barrows. I love that section in LOTR, I Like the Bree supplement and the Dagorlad supplement for MERP, and I’d love to take a tour of the British isles focusing on the various barrows, eroded and not, buying all the crappy little pamphlets and getting keys from all the local shopkeepers for the gates to the barrows. However, this module would be good even if I didn’t like barrows. It’s very atmospheric and has  good touch of the weird to it.

The backstory here is a good one, with just enough to get us going and a twist or two thrown in. It’s also very human, in a way that many are not. The backstory & hooks (six are provided) don’t really take up more room than a page, so it’s not too lengthy either. A certain minor personage in the highlands, we’ll say a yeoman for example, has the love of his life put to death by the local lord. He rises in rebellion and gets a decent following behind him. The local lord, an aging fellow, finally gathers his main army and meets the rebel on the field of battle, smashing both armies but  defeating the rebel army handily. The rebel leader has escaped though, and the local lord needs the PC’s to track him down and finish him before he raises another army. Sounds like a certain movie, eh? Well, there are a couple of twists … The rebel leaders woman actually WAS a witch and involved in all sorts of foul deeds. He didn’t really care though, he loved her. Oh, and he died in the first rebel raid, but such was his wrath & hatred of the local lord for putting his love to death that he rose as a wight. The rebels still followed him though, to their doom. Our wight friend doesn’t really care about his armies defeat though; he’s found an ancient artifact which will allow him to raise all of the dead on the battlefield as an undead army, and in return for this he expects his lost love to be restored to him by the powers of darkness as a reward. So, all in all, he’s a pretty happy guy right now. I really like this backstory. It’s short, it initially invokes a familiar theme (William Wallace) but then twists it in a nice way. The themes of anger/wrath and love in the backstory are very nice elements also, which help to humanize things and make the story & goings-on much more personal and realistic. It should be something that the players can connect to easily.

There’s a small wilderness adventure through a freezing moor to the barrow mound that the rebel/wight has retreated to. It’s full of freezing winds, barren skeletal trees, and a low fog hanging a foot off the ground. Spooky! The cold and mist saps the characters strength, both through hit points and through the actual strength points. There’s a nice wandering table provided full of mostly undead and critters like will-o-wisps. They all have some motivations and a short backstory provided. I LOVE this; a wraith that was the victim of a murderous outlaw, who mistakes the party for his assailants. Zombies who were killed during a loot raid, carrying their bags of rotting foodstuffs, and so on. I LOVE local color. It’s too bad that’s there is not an actual wilderness map provided, or details are given on how far away the barrow mound is from the battlefield. Whoops, looks like the edit/layout guy left something out …

The barrow mound complex has two parts: the mound proper and then a small lair dungeon underneath. There’s A LOT of creepy and weird stuff going on inside this place. First, it’s got some wights and it’s littered with secret doors, giving them the ability to conduct some serious hit & run raids on the party. The module suggests that they work in packs of three with each one attacking from a different direction at the same time. There are a lots of tricks/traps scattered throughout that have a weird fantasy feel. For example, a stone coffin with ‘?’s for Birth, Date, and Name. When a character touches it they disappear and the name & dates are change to reflect the characters. The party has a limited amount of time to save them. There is an alchemy lab filled with zombie hands, mucous covered corridors, weird Satyr priestesses, and all sorts of other goodness. The author really appears to have embraced appendix N in the 1E DMG for inspiration and I love it!

This is a short piece, only seven keys in the lair and seven more in the mound. It’s also jam packed with atmosphere. Every encounter is full of the great kind of detail, terse but evocative, that really sets the mood and invokes an ancient celtic horror tale. It’s not just a hack-fest either, the party has the opportunity to talk to and negotiate with several of the encounters, including a demon and some of the undead! There’s a lesson here for others: just a little extra work can turn your cookie-cutter monsters in to an encounter with depth. There’s a couple of new monsters and a couple of new magic items to spice things up also. The barrow map is nice & complex, but mostly because of the large number of secret doors/tunnels. The lower lair is a small branching map, with two rooms behind two others.

It’s hard to fully convey the weird fantasy and dark celtic feel that runs throughout this module. Every single room seems to have something strange for the party to mess with … or not if they are smart. This is really a superior product, marred only by the lack of a wilderness map, which seems to be a layout/publishing issue. It’s well worth owning and most certainly a keeper.