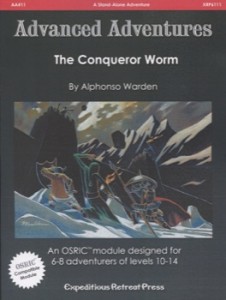 Five hundred years ago a thing from beyond space and time came to the frozen north. It quickly subjugated the primitive humans and other natives of the region. A frost giant Jarl put together a major army and had a magic weapon created and with these he broke the White Worms army of thralls and and deeply wounded the beast. Now the worm has awakened from his slumber and once again gathers an army of thralls. The party must raid the tomb of the jarl to retrieve the weapon, force their way in to the white worms domain, and defeat him in his iceberg lair, all before the worms magical cold, creeping across the lands, destroying all life. That’s a nice backstory, although it’s presented a bit of an overly long format. I particularly like the aspect of ancient ‘heroes’ being something that is usually considered a monster.

There’s about ten miles of overland adventure before reaching the tomb of the Jarl, and then about another five miles in the same direction before the party reaches the citadel of the white worm. Overland travel is restricted by the snow and cold to about three miles a day, and there are severe impacts to the party health and travel rate as the temperature further drops by five degrees a day as a result of the worms magic and the cold creeping over the land. There’s a small wandering monster table with a lot of murderous creatures on it, a potentially friendly encounter, and a couple of environmental hazards, such as crevices and snowstorms. The creatures do have motivations, but with the exception of the friendly one, they are all ‘looking to eat the party/kill them.’ I do prefer a little more depth in my wandering encounters.

The frost giants tomb is setup up as a challenge for the next group of heroes who the giant assumed would need his weapon to finish off the white worm. The tomb complex is very linear and is essentially just a straight line of corridors connecting rooms. I prefer a more open type of complex that gives the party more choices; the linear format, while useful sometimes for tournament modules, limits things too much for me in non-tournament play. The doors inside the tomb are double wizard locked and magical travel is forbidden, so no passwalls, phase doors, or teleports are allowed. I don’t like this because I feel it restricts the parties options too much. Essentially, it forces things down a ‘what was the designer thinking’ route instead of a ‘let the party be creative in their solutions’ route. The tomb is full of traps and puzzles, although neither are of the variety I prefer. Again, this is because I don’t want to guess the designers intentions, I’d rather play creatively. Several of the traps are of the ‘a false door that triggers a trap’ variety. I would prefer an environment in which cues are given to inquisitive PC’s about the nature of the hazard, and if they pick up on these subtleties and inquire more then they can avoid the trap. Predictably, the Jarl is now a mummy and battles the party prior to them winning his magic worm-killing sword. This sword crumbles to dust when the worm is killed. Nice, in that it has had it’s special purpose fulfilled, however probably not needed because the sword is of an appropriate power-level for play at this high of a level.

After the tomb there’s a small encounter with some border guards at a choke point in to the white worms stronghold. This is a massive wall with four frost giant thralls, all of whom are equipped with Eyes of the Eagle magic items. Yeah, I know the worm is a high-level duel caster, but this strikes me as a ‘magic economy’ sort of thing and that leaves a bad taste in my mouth. They have some winter wolves as guards also, as well as some boulders and javelins of lighting. The party then has another short overland encounter prior to reaching the iceberg that is the worms fortress.

The worms citadel once again prevents extra-dimensional travel such as teleports and the like, and all of the doors on two of the three levels are double wizard locked. There are 24 keyed locations on the three levels with the maps being a kind of central hub arrangement with corridors branching off them, dead-ending in rooms. More options for play and exploration then the tomb, which is good. It’s full of deadly traps/tricks, such a staircase in which every fifth step is trapped for 15-90hp of damage. The encounters are mostly with ‘cold’ creatures, demons, and a group of sis high-level magic-users. The worm proper will be a challenging encounter as it is a 20th-level cleric and 15th-level MU with 200HP and does a lot of damage each round with it’s bite. Finally, the party can turn off the cold-device, which is AC-6, has 1000hp, is 90% resistant to spells, requires a +3 weapon to hit, and does 500hp of electric damage each time someone hits it. Good luck!

I didn’t find the text of the adventure too inspiring or evocative. There are some attempts at weird fantasy thrown in, idols, pools, and the like, which remind me a lot of the last section of the Tharizdun module. There are a lot of ‘save at -4 or go insane’ type tricks and lot of traps which tend to focus more on damage then Save or Die. I don’t have a problem with Save or Die, but I do tend to think it’s overused and needs to be within the context of a room description that gives the PC’s a chance to avoid. I prefer a PC push the button that kills him, rather than simply entering a room which kills him.