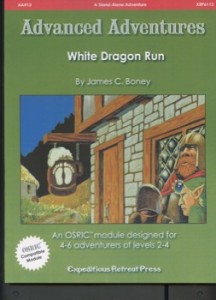 Counting backwards from #21, most of the AA line has thus far been tournament modules, linear tombs, or small dungeons. This product is a bit different; it’s a small sandbox and home base. White Dragon Run refers both to a small river and the small village that sits on it. It’s located on the edge of the borderlands; the last bastion of humanity & civilization. Or maybe The First to be Invaded, from a different point of view. In this respect the module is very similar to B2 – The Keep on the Borderlands, and to T1 – The Village of Hommlet.

The wilderness area is about 23 leagues by 20 leagues. From the northeast corner the map is composed of bands of terrain running NE to SW. We get mountains, hills, forests, swamps, and forests again with a couple of rivers running through the region. There are numerous caves & played out mines in the hills, leading to lots of opportunities for a DM to expand the region with their own creations. This is exactly how it should be for a sandbox/home base type area.

The village proper has about nine of the major buildings detailed, including the garrison, inn, jeweler, church and general store, as well as the home of some of the prominent members of the community. These tend to be third level or so NPC’s who seem to have the best interests of the community at heart. There are about a dozen or so other homes on the map along with some tables for generating their occupants. The surrounding fields & such are not detailed at all. We also get a decent sized rumor table, as is proper for a home base environment. The village is a bit … bland. The occupants all seem to be fine upstanding members of the community with everyone else’s well-being at heart. The NPC’s, major & minor, just don’t seem to have much personality to them. A couple of folks from Pembrooktonshire would go a long way to spice up the village.

The region surrounding the village has a variety of wandering monster tables provided. A perusal of the tables indicate two things. First, the region is CRAWLING with zombies. It’s like some zombiepocalypse movie; they are everywhere and in huge numbers. The second item is that this place is a death trap! A feller could get killed outside of town, and pretty easy at that! These are proper wilderness tables, so we get 2-20 wolves, 1-6 ogres, or 2-20 gnolls, for example. I sure as hell your players a) are quiet and b) know how to run away. They are sure going to learn some of the OSR style of play in this puppy! We also get a couple of various tables for generating detail in the various hexes the payers explore: empty hexes, piles of dead bodies, ruins, and encampments. 1 in 6 hexes has ruins in them, and 50% of those are haunted (2-16 ghouls anyone?). 1-6 hexes has piles of dead bodies in them; this place is even deadly for the NPC’s! There’s a lot of folks running around also. Wanderers are checked for every hour or every other hours, with a 1 in 6 chance. This reminds me of some of the old computer RPG’s from the 80’s; leaving town was a sure fire way get to get yourself killed. You’d run out, have a encounter you prayed you made it through, and then run back to town to rest up. Nothing wrong with that, and it will sure teach the players some humility!

The modules is mostly a home base/sandbox, but it does have two small encounter areas detailed. The first is an old abandoned temple. This is a nice open-concept map with a couple of large central chambers with lots of small rooms off of them. There’s some vermin about (8 giant spiders in one of the rooms!), a few undead, and a group of 15 hobgoblins. The treasure content of this section feels a bit light; maybe 1,500-2,000 coins worth. It’s a nice little ‘dungeon’ though. The second encounter area is an old outpost that was overrun some time ago. It’s now inhabited by bandits, 25 or so with another $2k or so in treasure, and is largely comprised of long corridors with small offshoot corridors with single rooms at their ends. There’s a small hidden section with a ghast and large cache of the original rulers weapons. This last creates a bit of a poser for the PC’s. Haul it out and sell it or turn over the weapons to the rightful authorities? The small amount of loot may play in to their decision …   That’s the awesome kind of follow-up that these sorts of beginner adventures deserve; hooks to get the game going further and set the tone of the game.

I’m a bit torn on this product. I like seeing a nice new sandbox with home base, and I really like the super deadly wilderness wandering encounters. The region though needs a few more mysterious ‘things’ floating about, rumor & history nd so on. The village is a bit bland though, as are the dungeons. The large number of creatures in the dungeons are nice, however the loot content is a bit low. This being an early edition module, most of the XP should come through loot, and given the large group of henchmen & hirelings the party are going to need …