AA#33 – The Halls of Lidless Shabbath 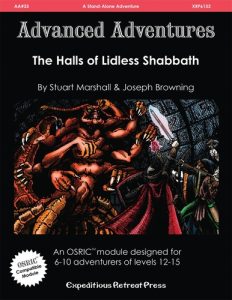 Rolled into a yard-tall, ivory scroll tube, the worn charcoal rubbing of a giant map etched into an ancient monolith hints that travel between worlds was once easy. More enticingly, the map pinpoints the entrance to the eldritch pathway. The crude rubbing shows nothing but the location of the ancient and legendary dungeon known as the Halls of Lidless Shabbath!
The Halls are the home of the evil sorceress Shabbath. She was famed for having researched many new spells and created many unique magic items, as well as possessing fantastic treasures of gold and jewels, and the caves are also suspected to be a nexus of the planes. Little about the contents of the Halls themselves is known, save that Shabbath is rumored still to be alive, the Halls are reputedly haunted by demons, and a large warband or small army of trolls has been seen thereabouts.

This is a large dungeon with around 110 rooms scattered across four or so levels. It’s a frustrating mix of interesting ideas and repetitive generic text. It’s a little one note for my tastes, trending towards generic monster encounters with little to inspire and motivate the DM. It’s at it’s best when it’s providing those little bits of idiosyncratic detail. High level adventures are rare. Decent high level adventurers are rarer still, and I’m still not sure there IS a good high level adventure. This is better than most.

There’s no real hook here. It’s an infamous place with an infamous inhabitant and lots of rumored trease and a gate to other places. It’s left to the DM to hook one of those things in to appeal to the players. The background and introduction are mercifully short, at only about a page, before the keyed encounters start. You know what that means? No gimping! That’s right! This is one of the very few high level adventures that does NOT gimp the PC’s! Want to teleport, passwall, dig, dimension door? Have at thee! Finally, an adventure that can let a party stretch their legs and pursue their full tactical and strategic arsenal! Stuart and Joseph are to be applauded for this. In return they add HORDES of monsters. On the first level alone the monster roster tells us there are 45 giant trolls, 30 minotaurs, 55 ettins, and 200 trolls, in addition to the other creatures. Ouch! You’re gonna need those spells Mr Wizard; pains a coming!

Anyway, there’s a largish 88 room level 1/level 2 and then a smaller eighteen room sublevel that is separate from a large insect-filled caverns levels and then the eight room “home” level of the titular baddie. The cavern main map, of levels one and two, are large and basically consist of a ring corridor around the outside with a couple of side passages to make up three of four smaller loops. It’s not necessarily the most interesting map design but it is serviceable. I think maybe I was hoping to see a little more variety in it, similar to Many Gates of the Gann. Essentially, the maps are the bare minimum required to support a decent adventure.

What bugs me about this adventure is the aggressive blandness of most the rooms. “34. TROLLS: There will always be 2d6 trolls from the roster in this room if any remain. They have no treasure.” There’s really nothing to that room. This happens over and over again. The name of the room is the name of the monster and then just simple stats. One step above this is a series of lengthier room description that still manage to convey little interesting information. There’s a room with two chimeras in it, Shabbaths favorite pets. They have a taste for halfling. It’s just another another room on the map with a smattering of text that doesn’t really take advantage of what’s actually being described in the room. Pet chimeras with a taste for halfling could have been the basis for any of a dozen different room features that could have been highlighted, but instead it’s just this bland text that lends a kind of generic feel. It does manage to fit in about twenty rooms per page, a nice feat of terseness, but without the sparks of creativity I would have licked to see. I’m relatively certain that if different choices were made then twenty rooms of decent content could have been included per page. One room has four large bronze statues. “They appear to be of giantesses, hags, anisses or creatures like that.” Why? Why be generic? Why be nonspecific in the description? What are the four statues of?

But there ARE good little bits mixed in and what’s very frustrating. One levels continually drips blood from the ceiling and the walls and floor bleed when cut. Another has ancient writing which, if read, provides a possibility of a benefit … and likely something bad. In one room trolls spitroast a dwarf (dead, skinned, gutted and shaved) over a fire. Another nearby room has a vampire hanging out in mist form in the bottom of a pit, following the party to attack … but cowardly fleeing at the first sign of a stake. A room that is the inside of a geode, with magical spells inscribed on the walls, like a spellbook. But there’s not enough of it, not nearly enough. An enchanted water fountain with a greenish tint, colored by a gem … that’s actually a soul jar. More of this and less “2d6 trolls are present. They have no treasure.”

I seem to say this alot. What actually are you paying for when you buy an adventure? A room called “26: Trolls. 2d6 trolls are present in this room.”? Really? Is that content that’s worth $15 in PDF form?

I don’t think so. I think what you are paying for, as a DM, is inspiration. It’s the DM’s job to run a good game for the players and it’s the products job to give the DM the tools they need to do that. One of those tools is providing evocative, interesting, and creative content that the DM could not have come up on their own. This adventure avoids the usual low spots that many fall into but it fails in providing high spots that makes one excited, that makes you WANT to run the adventure. Your mind doesn’t get excited.