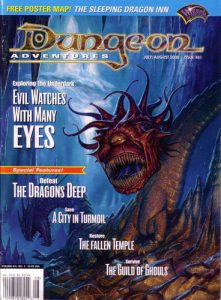 This is the last issue with 2E adventures in it. What fresh hell awaits us, gentle readers?

Here’s a letter from this issue:
“Recently there have two modules in which kenku NPC’s talk. According to the Monstrous Manual, kenku don’t speak by communicate with each other telepathically. Has there been a rule change that I am unaware of, or are we just throwing away the rules with ‘artistic license.’”
-Royce Williams, via email.

The response is not calling Royce a little bitch. Instead they offer a solution of gesturing and promise to catch such mistakes in the future. Were I editor I would have taken the opportunity to publicly shame ROyce, noting that his viewpoint is everything wrong with D&D, instead of pandering to him and enforcing the view that Royce’s viewpoint has any merit.

What’s in the box? WHAT’S IN THE BOX! I want to not like this; I tend to not like convoluted set ups. I fail. In a city at random, the party gets a scroll delivered by winged snake. It has a scroll of seven riddles and a delayed blast fireball. You have three hours to find all seven additional fireballs before they explode. The clues are decent, there’s help in the form of the guard captain and 100 guards, and the various fireballs are hidden in fun ways. In the middle of coals in a forge, in the bottom of a privy and so on. There is sometimes a complication, like a group of angry brewers at the mayor’s office whose mob don’t want you cutting in front of their angry mobbing. There’s a little section at each end regarding who dies if the party doesn’t find that fireball. It all ends with a prison break, since the guards are dispersed. The text is not overly long or meandering … at least by Dungeon Magazine standards. It’s a little silly and full of chaos .. which is probably why I like it. I think, perhaps, a few more words on managing time and/or an abstracted system for managing it would have been order. It’s also generally well organized, although the city map could have been numbered in a better manner to make finding location easier.

Divisions of the Mind
By Charles C. Reed
AD&D
Levels 8-12

Another one of those giant unwieldy Dungeon adventures. Fifty rooms, spread between some beholder tunnels and a floating illithid lair. Makes use of ideas from the Illithiad Supplement. The sixteen/seventeen room beholder part is essentially all hook, the beholder wanting to hire you to investigate the weird floating crystal castle he’s found. It’s full of anti-magic/anti-scrying stuff, which is never a pleasure to see. All of the encounters are full of lengthy text and overly described rooms. This is a textbook case of the unwieldy nature of large adventures that pay no attention to organization. “Next to the pots of stew are ceramic water jugs.” Well now, That’s an Adventure to remember!

Robe of Blending. Ring of Invisibility. Absurdly prepared villain. It tries, such as providing a (boring) summary of the NPC’s who work the inn the adventure takes places in. A few little things triggered in the rooms. Go in room one and trigger an event in room two. Make a noise and trigger a merchant screaming at you. All I could think of was one of those light gun games, like Crossbow. It’s not really long/large enough to breathe, and if it were then the set up (with the prepared villain) would be even more absurd. Inn of Lost Heroes this is not.

A thirty-five room abandoned temple that you’re hired to clean out … including the orc bandits who just moved in. It’s got a decent map for it’s two levels, interesting layout, nonlinear for the part. The orcs are summarized (boring, but summarized) on one page and their tactics/reactions on another, both plusses. The room descriptions note the history of the room and things which WERE instead of concentrating on things that ARE. If you accept the length of the room description then it’s not a bad dungeon/adventure with enough bits of variety to make things interesting after the initial orc assault. A little rough for 1st level though, I think.

I’ve been accused before of having too tight a definition for “adventure”, and I’m sure I’ll get burned again on this one. This isn’t an adventure. It’s a locale in the underdark, a kind of “free village” or “free town” ruled by a couple of dragons and housing four or five factions of creatures in a loose alliance held together by the dragons. And some of those factions have another sub-faction, or at least something else interesting going on, in order to make them more interesting. Infiltration by doppleganger? Sure! Scheming drow? Sure! The setting is at its best when detailing those sorts of things, since they can lead to interesting outcomes and play, and at its worst when it is just describing More Things To Kill. As it stands it is neither an adventure or a Locale With Lots Going On. The concept is good, but it fails in its execution of Providing Shit/Motivations To Interact With. More NPC’s. Most goals and motivations for the NPC’s More weird stuff going on. more. More. MORE. This is what brings a locale, like a city, alive. Props for including a summary sheet with all the monster stats on it.

Fucking god dammit! Sewers! Skulks and ghouls in the sewers. Lots of read-aloud, lots of DM’s text, not much interesting.