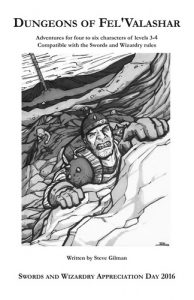 Written in celebration of Swords and Wizardry Appreciation Day 2016, Dungeons of Fel’Valashar is a collection of mini dungeon adventures with a small region called Fel’Valashar that they take place within. Each of these adventures is written in such a way that they don’t have any ties to each other or to Fel’Valashar. This means you can easily drop them into your own world with no fuss.

This is a very basic set of three mini-dungeons, with about eight rooms each, located in a small little region. It’s all quite bland and provides few details that could not have come from a random generator, either for monsters or dungeon trappings. It begs the question: what are you actually paying for? I think you’re paying for the designers imagination, and alas there’s little here.

The first clue is probably the wandering monster table. Owlbear. Goblin. Orcs. Bandits. Ogres. Nothing more than stats. The value add here consists of copying the monster stats out of the Monster Manual and on to the page in abbreviated format. No one is doing anything, there’s no content that adds any value at all. Soooooo…. Why is it there? Because it’s supposed to be? Because it’s required to be? It’s the accepted form of adventures with a wilderness component to include a wandering monster table? If it’s going to be generic then it probably shouldn’t be included.

There are four mini-dungeons, in various forms, from partial caves, to an abandoned village. There’s an earth temple. As soon as I read “Earth Temple” I knew it was going to be some symmetrical dungeon design. I was not disappointed. The first map, an old cave system is one of the more interesting, with a ledge or two, some statues, a big pond, and other cave features mixed into a transition to dungeon chambers. The problems with the rest of the dungeons are fully in view in just this first one. The hooks are obvious: “unnaturally large dogs have been seen in the area” or “local wildlife has been found dead in the area, drained of all blood.” I would suggest these are not hooks at all. They are simply facts. They lack anything interesting or fun that the DM can leverage to get the characters involved. The actual dungeon has room descriptions like “Main Hall. The large hall was used for entertaining guests […]” or “Servant Quarters. Rows of dusty beds line the walls of what was once living quarter for the staff.” Yes. We know they were living quarters for the staff. You told us that in name of the room, Servant Quarters. We also know what is in it. You told us that also IN THE NAME OF THE ROOM. “Dining Hall.

This room was once the dining hall for the inhabitants of the complex.” This is nothing but filler. It’s not needed. It clogs up the adventure text. It adds nothing to the adventure. The designer must either add value OR OMIT THE TEXT. The text here almost ALWAYS fails in both of those basic tasks. Each dungeon does typically have one bit, maybe two, that is not completely generic. “4 zombies are bent over the blood-drained corpse of an adventurer, feasting upon it, while 4 others shuffle around hungirly.” There’s another room, a cave, that has a two statues in it that you can loot. That has potential. Two statues, a cave room with a pond in it … it’s begging for something else, but nothing comes of it.

There’s a village with a harpy in it, almost completely empty except for generic adventurers wandering about as random monster encounters. “ Human Warrior” or “Human Magic-User” … that adds NOTHING. “Farm. Crops were once grown at this fenced in farm.” *sigh*. Again, “the rotted remains of pigs that were left here …” is one of nicer bits of text in the the town, as is the very concept of a spiraling pit mine in another of the mini-dungeons. But it’s just not enough. One idea per mini-dungeon is not enough to sustain play or justify an eighteen page booklet with four dungeons.

The product is only offensive because of it’s lack of value. You’re not going to be bombarded with volumes of text ,but I’d assert that you’re not going to get anything here that 5 minutes with a pencil and paper wouldn’t get you. It’s safely generic, and I’ve no place in my life for that.

It’s Pay What You Want at DriveThu, but you have to want it first.