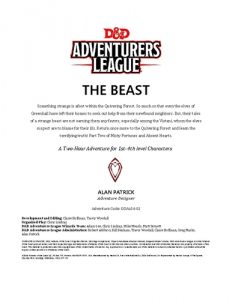 Ok, I promised. When I found something that didn’t completely suck I would rename the Sunday review.

Something strange is afoot within the Quivering Forest. So much so that even the elves of Greenhall have left their homes to seek out help from their newfound neighbors. But, their tales of a strange beast are not earning them any favors; especially among the Vistani, whom the elves suspect are to blame for their ills. Return once more to the Quivering Forest and learn the terrifying truth! Part Two of Misty Fortunes and Absent Hearts.

It’s a railroad but it does make an effort to support the DM and add flavor to the game. A village will likely starve and not make it through the winter if the local trappers, missing for several days now, are not found. There’s a couple of forest encounters, some of which do a good job in setting mood. It ends with a forced combat, and then maybe a nice epilogue. When the adventure goes out of the way to add flavor it does well. When it is presenting “just D&D stuff” it feels like it is phoning it in. Designed as a two hour adventure, it provides some (really obvious) guidelines to turn it into a four hour adventure. Essentially, you talk to folks in a village, wander the woods a bit and have a couple of combat or “mood” encounters, and then fight the baddie, all with the threat of a blizzard coming up.

The first eight pages are essentially filler and garbage and can be thrown away, except maybe the three (short) paragraph adventure overview. Everything else is boilerplate or generic. “You find yourself in the adventure village one morning …” Oh My. THAT’s a brilliant hook. Also: “you have terrible dreams.” Clearly the hooks were a token afterthought.

The mood setting is better than average and pays lip service to this season “being about the land of Barovia as an additional character in the game”, or whatever. The village has thick cloud cover, giving the village dismal gloom. There are piles of snow here and there , it being winter. Cold fat raindrops splatter into the mud. Mud, fresh rain, wood smoke, whipping wind, clattering shutters, rain on wood and metal. They’ve done a decent job. The cave later is fresh with the smell of wolf urine and raw meat. Ewwwww! Elsewhere an old woman/hag (not the MM kind) is well described with some fun dialogue lines and good guidance for the DM. Large stick figure effigies ala Blair Witch in the wintery woods. The faint cries of an infant in the distance, intermingled with the yowling of wolf pups. None of this is in the read-aloud, it’s all DM noes and atmosphere, and is, gasp!, easy to find and use!

This can be contrasted with the usual terrible read aloud. The same as is usual for Strahd, it’s either banally short “The forest has grown silent, and the wind has gone eerily calm.” or is just the same old generic fact based generic stuff, adding nothing useful to the adventure. IE: why is it read aloud at all? Someone in WOTC must have finally gotten their (internal) two-sentence/three-sentence read-aloud reminder, only about the half of the read-aloud is longer than three sentences. Every once in awhile there’s one of the old stinkers in the DM notes: “the sun has not yet fully awoken from its slumber.” Uh huh.Hey buddy, reserve that shit for your unfinished great american novel.

Organization wise it’s a mixed bag. There are nice bullet point lists in the village section, to help pull out information. Other sections are rampant with extra DM text and wordy, generic descriptions that add little. The rumors/information/investigation section is also a little too fact based. A more conversational style would not have had to add any length and would have added a lot to the atmosphere. There’s a nice NPC overview in the back, all on one page, for the DM to reference during play. Bravo! Gold Star! SOMEONE associated with WOTC has run a game at the table and understands the need for such reference material. It also buries important text in surrounding nonsense, making it hard to find at times. The verbose style and useless detail (as opposed to useful/inspiring detail …) hides facts that you need to know.

Maybe the biggest problem, beyond the text padding/obfuscation, is the LACK of flavor in the combat encounters. Essentially, any time you fight something it’s presented a generic D&D combat. It’s not really clear why. Blood bords attack, or Death Dogs attack, or plant-men attack. There’s just nothing interesting. Not in the read-aloud, not in the DM notes, not in the monster text. It’s just boring. Nothing even in the terrain to make it interesting. There are a couple of exceptions. There’s a cute Zombie Apoc/Walking Dead encounter with three zombies attacking some elk. Useless read-aloud and DM text, and uninspiring DM text, of course, but the concept is a nice one. Like wire the bloated bear corpse that explodes in a shower of gore and swarm of centipedes. Very Nice! THAT one has nice read aloud: A very dead bear sits, leaning against a tree slightly off the path–its belly horrifically distended. The stench is overwhelming, even from nearly forty feet away.

Ultimately this is not the complete piece of garbage that I’ve come to expect from Adventurers League adventures. It does try to support the DM in important ways. It misses in the combat encounters and could use some interesting treasure and some better editing to prune back the garbage text and highlight the text that eithers important to know or inspiring to the DM. It’s hard to have a two hour adventure that is not a railroad and this is, essentially, a scene based adventure. If you accept that it MUST be scene based, because it’s AL, then maybe we can forgive this. I don’t know. It seems like there must be a different way.