The Tomb of Rakoss the Undying 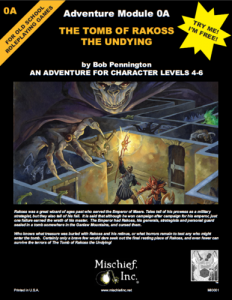 Rakoss was a great wizard of ages past who served the Emperor of Maere. Tales tell of his prowess as a military strategist, but they also tell of his fall. It is said that although he won campaign after campaign for his emperor, just one failure earned the wrath of his master. The Emperor had Rakoss, his generals, strategists and personal guard sealed in a tomb somewhere in the Ganlaw Mountains, and cursed them. Who knows what treasure was buried with Rakoss and his retinue, or what horrors remain to test any who might enter the tomb. Certainly only a brave few would dare seek out the final resting place of Rakoss, and even fewer can survive the terrors of The Tomb of Rakoss the Undying!

This is a generic dungeon crawl in a sixteen room dungeon that takes eighteen pages to describe. It begins generic hook #23: “hired by sage fetch quest.” That takes one directly to the dungeon and then bores both the party and DM with generic encounters, descriptions, and read-aloud. There’s a bright spot or two, but I’d chalk this one up as “slightly better than the average dreck.”

The dungeon keys start on page seven. That means five or pages of backstory, advice to the DM, hooks, and general conversational material that goes nowhere and adds little to the adventure. Half a page is spent describing state blocks. “Hit dice will be listed as number and type, such as 3d8.” The new Bryce, now with fewer crushed expectations, notes that it’s pretty easy to just skip over the first seven pages and get to something halfway decent. He would recommend just ripping them out and never reading them at all. The bitter old Bryce would note that this lengthy and irrelevant intro is a portent of things to come. It telegraphs a lack of focus in the writing, of not understanding and concentrating on what’s important in an adventure.

About ¾ of a page is spent on the default hook, the sage fetch quest. There’s nothing unusual in it. Sage hires party, gives them map, he wants the books they bring back. A) that’s boring. B) it takes ¾ of a page of boringness to get to the end of the boring. The alternate hooks are “you find a map” and “someone hires you to go there in exchange for something from the tomb.” IE: the exact same hook as the ¾ page hook. One of the most interesting things in the book are the two sentences devoted to the third hook. “A band of undead spontaneously comes to life in a nearby town as a result of unstable negative energy that emanates from the tomb. A local lord hires the characters to investigate.” The previous hooks are simple tasks. Jobs. But this third one is full of potential energy. Random attacks in the night. Weight effects in the countryside. Scared villagers. A local lord disappointed with his men and in fear of losing control. All of that is implied in those simple two sentences. That’s what good writing does. It inspires the DM to greatness. It makes their mind race to come up with possibilities to use. If the adventures had instead spent ¾ of a page focusing on an OUTLINE of that hook, instead of ¾ of a page of boring read aloud for Generic Hook #23: Sage Fetch, then you’d have a couple of hours of hook for the party to get into and get the context. Alas, this is not to be. A full page wilderness map is complemented by ¼ page describing an uneventful trip through the wilderness (then you wasted the map …) that ends with a forced combat with a band of Ogres. Preprogrammed combat encounters are not fucking content. They are boring and they take away decisions from the players.

This all ends in a paragraph of overwrought read-aloud about the tomb entrance. “Although the noonday sun is hot on your face …” oh, sorry, I threw up a little in my mouth. Anyway, the illustration showing the entrance is a great one. A nice semicircle opening, runes above the door, cold air mists coming out, icicles inside with trees and little hollock. Really top notch in bringing a mood to the DM. About 20 times better than the generic fact based boring overwrought text.

This brings us to the part of the review I like to call “The terrible design places a lot of terrible restrictions on the party because the designer can’t be bothered to design a level appropriate adventure.” IE: blah blah blah justification. Blah blah blah you can’t use passwall, teleport, blink, dimension door, etc. Blah blah blah undead are a lot harder to turn. Blah blah blah everything inside gets +2 AC and +2 to saves. This is lame. The characters earned those abilities, why cheese them out of it? So what if they passwall? Good for them! An adventure can be played many different way. By limiting the party you are telling them and the DM, that they will play it EXACTLY the way you described it. I should only aspire to that degree of conceit. “It might be too easy!!” Good. Smart/Creative players are SUPPOSED to have an easier time. Unconventional thinking is what makes the game fun.

The room keys try to pay homage to classic design elements but are hampered by generic boring read-aloud. A big stone statue of a knight that comes to life. A wizard’s lab. An evil shrine. All the classic room types but hampered by boring read aloud. “You open a large wood door to reveal a moderately sized rectangular room.” Boring read aloud. BORING! “At the south end is a twenty foot tall large stone statue of a fiendish knight carrying a dire flair and a tower shield.” It tells. It should show. Why is it fiendish? Describe it and let the players imaginations run wild and draw their own conclusions. It doesn’t help that almost every read-aloud ends with “and then the monsters attack!” I think this shows a fundamental misunderstanding of what old school gaming is, or even what FUN gaming is. This is not an exploration adventure, it’s a combat adventure. Room after room of it. Remember the forced ogre combat in the wilderness? Np sandbox environment here. Just forced combats. And remember, no cheat spells so you can’t avoid them.

The monster descriptions are boring also. Instead of exciting content we instead get a list of things, ala 3e/4e/5e/ that the undead are immune to. “Undead: Immune to mind influencing effects, poison, sleep, paralysis, stunning, and disease. Not subject to critical hits, subdual damage, ability damage, energy drain, or death from massive damage.” *whew* Good thing I was told that! It sure did add a lot of enjoyment to the adventure for both me, the DM as WELL as the players!

The treasure is lame and boring books treasure, with the exception of one item. The monetary treasure is not appropriate to the level of the adventure and is pretty boring as well, except for maybe a demon tapestry and a tiger skin rug. It is telling that one of the items is described as a Masterwork Greatsword. This whole things feels like a conversion.

The map triess. It shows lots of details on it, from furniture to some rubble to traps. That’s good; it uses the map to help enhance the adventure text. It’s a little small and “light” in the lines, making it hard to read/use, but they clearly tried. Likewise there’s an element or two of good things: destroying the statue reveals a giant ruby inside (Yeah! Not explaining!)

The classic elements and tropes are present, but not used well. They come off as boring instead of exciting or imaginative. Fundamentally I think this is because of a lack of focus. The read-aloud and DM text do not enhance the rooms. The text just ends up being useless. This could easily be a one-page and lose nothing, because there’s nothing to lose. That’s a shame.

2 Responses to The Tomb of Rakoss the Undying