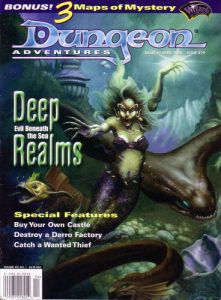 This is quite a nice little adventure and has several elements atypical for Dungeon Magazine. A grifter has a deed for a castle and sells mps to it for some gold so prospective buyers can check it out before purchase. The castle is a wreck and so no one ever buys and he’s free to sell another map. There’s a small overland portion with two distinctive areas, one mostly civilized and one mostly not, along with a short paragraph on a rough and tumble border outpost. The keep has two parts: the outer part and an inner tower, with dungeon below. The outer part has goblins and an ogre exploring while the inner part has Seawolves. Neither group has to be hostile and talking is possible with both (gasp!) and you could play one party against the other. There are prisoners to rescue, trapdoors to other areas, and some NPC/oddities entities to interact with. The treasure is not magnificent but IS presented in a more interesting fashion than most adventures. I like this one a lot. It’s got the usual wordiness problems and get a little detailed in the prescriptive “if X then Y” nonsense advice. It’s a charming little adventure with possabilities and lots to interact with.

This is a two-page side-trek, and maybe the one truest to the vision of the side-trek, as I understand the concept. The party sees men riding hastily by and disappearing into a certain area. In town they learn he’s a famous bandit, with a fat reward on his head. There’s a small six room cave complex that it mostly traps/early warning for the bandit lair beyond. Probably a big bandit fight at the end, but it does have a zipline! A little too much “and then here’s another trap, and then …” for me, but I like the hook/concept and the focus, keeping it to two pages, is nice.

This short adventure takes a long time to get where it’s going. After a stay at a rural inn the party wakes to find everyone gone. Then some kobolds attack. This leads to the lair of a plant cult. The lair is small but has a nicely creative layout, complete with giant turtle skeleton/shell entrance in a hill and a bridge over a river chasm inside. This could and should be a lot shorter. The quite interesting map isn’t quite large enough, at only seven rooms, to take advantage of the multiple levels and elevation changes in it. IE: fit this all in two-pages and it would be an ok side-trek.

This adventure has one central idea and then wraps a lot of garbage around it. There’s one large cave chamber, a foundry, run by derro. Multi-levels, lots of equipment, derro guards, workers, slaves, names slaves, captured prisoners, bugbears guards, all essentially in this one large complex chamber. Slag buckets, ladders, ledges, chains, the whole works. That’s the main encounter. It would work as a stealth plan, or one large mini’s combat scene at a con. It’s surrounded by some garbage about flying horses and some token aerial combat with manticores and blood birds during what is, essentially, one large and long hook. Way, way, WAY too much text describing the factory in order to be usable. The encounter area would be interesting if it were GREATLY simplified in text length.

I take it back. Cloudkill, above, is the SOUL of tersity compared to this one. Underwater fetch quest in an old merman temple. Bullshit lame intro intro and backstory, as is usual for Dungeon. The temple has several levels and is notable in that is has a lot of larger rooms and a lot of empty rooms that are not described. It’s got a random room generator table section in back to help fill in, but there’s not really much interesting on the table. The rooms commit one of the capital sins in their at-least-one-column-of-text-per-room descriptions: lengthy descriptions of what the now-ruined rooms were once used for and held. The text length is a MAJOR turn off. There’s not much in the way of interesting encounters, anything halfway decent is ruined by the railroading DM advice. It all boils down to combat after combat. 🙁