Moans of the Dead 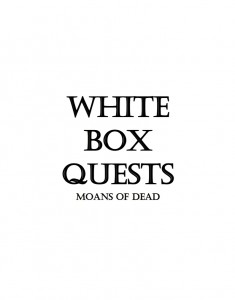 by Lotheras of Gaiden
Self Published
Swords & Wizardry
Level 1

The Villagers of Iceshire are certain they are hearing the gurgling and moaning of the undead in the snow capped woodlands that surrounds their tiny civilization. Some of the citizens believe a Liche, spoken of in legends, is trying to acquire what he desperately seeks: the Gray Pearl. An amulet possessing the divine powers of creation.

I know that “What does OSR mean?” is a hot button topic in some circles. In a related note, is an adventure a “Swords & Wizardry Adventure” if it contains S&W stats? Are there any other requirements? I don’t know. It seems like there’s a Spirit of the Law and Letter of the Law thing going on. This is a linear scene-based adventure that uses S&W stats but does not follow the S&W treasure guidelines. Also it’s linear & scene based. It’s got some decent imagery, especially with the monsters, but 8 linear scene encounters, half with large groups of ghouls, half with “and then after you kill them 4 more come rushing in” just doesn’t seem like the spirit of S&W to me.

Adventures like this are why I write reviews. I have certain expectations and when they are not met I tend to feel cheated. This thing is not what I expect when I buy a S&W adventure. It may be fine on its own (it’s not) but you should know what you are getting before you buy. Especially at the $4 or $5 price point on RPGNoW.

A monastery/religious village is having trouble meditating at night because of the increasing moans coming from the forest. The Moans of the Dead! (It sounded better in my head, in a cheesy 50’s way.) There’s about a page of background before it jumps into the encounters, which are one page per encounter. The introduction is ok. it’s nicely terse and evocative, but is missing a few things. Like a map. (Remember, Scene based! in a village?) The name of the bad guy is buried further in the adventure, even though the priest briefs you at the start. A little more on the village would have been nice at the start, to get things oriented.

The eight encounters all have the same qualities. Props for consistency, even if they are not great. At least the review will be shorter. 🙂

There’s a section of read aloud. it’s about four sentences each, but quite long sentences. There’s usually one good descriptive line in it. “Pale white boney hands reach out from the earthy graves!” or “in the distance you hear the screams of the villagers and the moans of the dead.” This will be followed by a description of the battle about to take place. There’s ALWAYS a battle. “3 tentacles attack” or some such. Then there’s the monster stat block and description (again, nice monster descriptions!) and a couple of sentences on tactics (which usually has a good evocative line: “they claw wildly with their bony fingers”, or some such. I liked it.Then there’s a section on treasure. “A silver ring and 14 cp.” or “12gp and 22 sp.” There tend to be large groups of monsters, especially ghoul-like things with paralyzation abilities, and after you kill the first batch another batch then shows up.

You should be recognizing some issues about now. Not enough treasure. Forced combats supported by the scene-based and format and lack of a map. Lots of tough creatures. Lack of agency in the second group showing up in a programmed fashion. In addition there is another railroad with the priest showing up later dead. That’s a typical plot-based problem that doesn’t account for the party not following the plan the designer had.

I REALLY like the creativity of the non-book monsters. (I didn’t go into them, but they are really good, non-standard, creepy, and well described.) I like the sentence or two of evocative text in each encounter. But the rest of the text is just filler. Stylistically, this feels like a Pathfinder or 4e adventure than it does a S&W adventure.

1 Response to Moans of the Dead