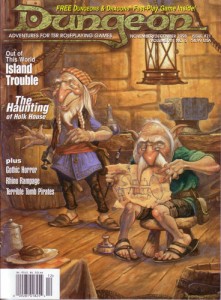 Set on the Lenore Isles, this is a little investigation dungeon crawl with a decent amount of color, that is at least four times longer than it needs to be. Giant rats suddenly plague the town. Instead of wererats, it eventually turns out that they are fleeing some newly freed ghasts down in some old caves/crypts. There’s a bad scene with an “arrest” of the PC’s, but otherwise there’s a decent amount of little colorful incidents, including rats chewing on a homeless waif. The (long) plot is laid out at the beginning and the town described after that. This separation of events form locale tends to be rare but I appreciate seeing it. There’s an entire sections about follow-ups that’s quite well done, but the homeless girl to the political position of an abbey, to a screw-up priest. I’d save the maps, make some notes on them, and keep the key to the dungeon/caves, throwing out everything else. You’d have a decent little adventure there.

This is a creative little thing about an island full of weird creatures. It’s got a bit of an Aliens vibe. Investigating the loss of a new colony, the party discover an island with some weird features and then tunnels underneath. New monsters with weird attacks/looks/breeding makes for fun times! The unusual island features (hatches in the ground? A lake with sides that go straight down? geometric irrigation troughs?) should bring a nice sense of weirdness to the adventure. Long winded, as is usual, the aboveground portion of the island could use a few more weird features and encounters. There’s a possibility for several mass battles, some nice ‘how the monsters react’ notes, and the party could be appointed governors of the island. Nice! Hard to recommend, based on the verbosity, but easy to recommend, based on creativity.

How Do You Stop the Rhino from Charging?
by Stan!
Marvel
Any

A sidetrek. The Rhino suddenly charges down a street from out of the blue. Nothing to this.

More Mere of Dead Men adventure, and, again, not a suck-fest. You’re sent to stop/investigate the evils of an old manor. It’s flooded, and lizard men are about. inside are some spooky undead, a demon, and an EHP. There’s a nicely little evocative piece around a magic pool that shows visions ala the Dead Marshes. I think it’s marred by having lizard men attack … I’d put that encounter later. The lizard men at the flooded manor probably turns into a little assault, which would be nice. The flooded manor, proper, is nicely described in a way which brings it to life. The undead could be a bit more … spooky? And the EHP/lizard men/etc inside could have a plan for responding to assaults on the lizard men. Uh, a plan other than “I spy on you with my magic mirror and prepare for you in the final room.” That’s ALWAYS lame. But the core is nice, if wordy, particularly around empty rooms.

This murder investigation involving voodoo has some wall of text and organization issues. Laid out in scenes but it’s not actually scene based. Hiding inside of this is a decent enough little voodoo thing in New Orleans. It’s got some decent humor also (the murdered banker recently denied a loan to “Doctor John” whose occupation is listed as “Voodoo King.”) There’s a nice half-alligator man at the end. Worth fixing, if someone had the time.