The Last Prayer of the Dying 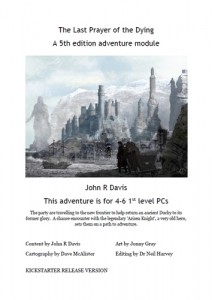 The party are travelling to the new frontier to help return an ancient Duchy to its former glory. A chance encounter with the legendary ‘Arisen Knight’, a very old hero, sets them on a path to adventure. Like most published scenarios there are some railroad parts, but enough choice to provide the feel of a sandbox.

This is an OSR conversion of a kickstarted 5e adventure that also has a Pathfinder version. It’s got 90 pages and could be considered a “sandbox” if one had never seen a real sandbox before. With respect to this adventure Sandbox means there are three or four places you can go. If all the world were sucky 3e/4e railroads then I suppose this would appear to be a sandbox. The inciting event of this adventure has a magnificent backstory. There is clearly a concerted effort by the designer for the adventure to be useful to the DM. Nothing gets close to the inciting event backstory (which will never come up, I suspect) and the high points of the adventure are when it reaches C+ territory.

This is not a good first effort. But dude DID run a kickstarter, raise about 1500 pounds, and get product out the door and is now running a sequel kickstarter. The secret to good writing is to keep writing. Keep producing, get better, and keep producing. As a human person I hope John continues. As a reviewer

Let’s cover the good part. The beginning has a lyrical and/or mythic element. I LOVE those. A knight rises from the dead when the land needs him, only to ritualistically kill himself to await the next need when the crisis is over. The party meet him as an old haggard man, being attacked. Which of the thousand faces can you count there? How many? I don’t care that it’s ripped off, its GUD. It preys on every subconscious feeling of heroes the players have heard. It brings back and summons those thoughts, feelings, and emotions they’ve had. It’s inspiring to the PLAYERS. That’s a singular quality of all of the best hooks.

There’s a … prescriptive? element to this adventure that’s embedded very deeply. Strong assumptions are made, espoused on at length, and others ignored. Early on, in the first tomb/dungeon, you meet a disillusion hobgoblin. He’s a prisoner. He begs for an honorable death. [Hobgoblins=Kingon and Orcs=Vikings in this world.] He goes on at length about what to do once he is dead, and who back home to contact to free his people. It seems like he goes on for a page between his read aloud and all the contingency data around his pleading/death. The only assumption made, in this or in the second dungeon (his people’s lair) is his death. OSR players have no monopoly on exploitation. ANY player would look at this and want to take advantage of the situation. And free him! What an opportunity! All of the information the dude would have about the power structure in the lair, the layout, who’s who. And freeing a fucking rebel leader to come back and help him in his homeland? AWESOME! And definitely the easy button for that second dungeon! Think of the roleplaying opportunities! “That’s Fred. He’s a little toady bitch who we can’t trust. [slit.]” Moral quandaries! Petty jealousies! Raw power grabs! Now THAT’S a real rebellion! That’s what happens when you take prisoners and talk to the monsters baby! Action & Adventure!

But of course that doesn’t happen. EVERYTHING is written as if the players kill him. And at length. The Tyranny of the Author’s Voice. This happens over and over again in the adventure and it’s disappointing. Less exposition, more contingencies. Or, even better, NO contingencies and just language that communicates the overall environment, giving the DM the ability to do their job. This shows up in explicit ability checks, and in reinforced by maps that small, cramped, and linear. Do X then do Y then do Z. Conform. Obey. Consume.

There’s a strong element of “detailed overview” in the town description that reminds me a lot of the nonsense in the recent WOTC harback adventures. A teen girl is being shown how to make the local drink by an old woman. (a different lame sentence after that one.) How about “Butterface Betsy being scolded by crone Carly as she milks a dirty cow directly into overly briney vinegar, trying to make Possett.” Fewer sentences. More detail. Communicates the vibe perfectly. Specificity is the SOUL of storytelling. Inspire the DM to do the dirty work. and fill in the details.

The town has a few people with too much description and a lot more with no description. And no summary sheet present. Make a fucking summary sheet people! Summative who, where, and their personality on one page for the DM to reference during play! The fucking adventure is supposed to be a play aid, not something to make more work!

A good effort is made in the wanderers table. “Giant rats feasting on a dead cow” is a good example of having the monsters DOING something when you encounter them. Most of the encounters are written in this way. Nine of the twenty are expanded upon AT LENGTH. Too much length. I can dig a paragraph or so to add some color, but two pages to describe a lot of detail that will NEVER come up? What’s described must be relevant to moving things forward, likely to be needed, and related to guidelines for the DM. Once the designer gets prescriptive (there’s that word again …) then the text drags on, the meaning of the encounter gets lost and WALL OF TEXT SYNDROME appears. This isn’t helped by the extensive, and boring, read-aloud. The authors cites their hope that they didn’t put too much in. You did. And it’s boring. Give the DM the facts. Give the DM the speaker’s personality (in one sentence. MAYBE two.) Omit the monologue. Done. Rinse. Repeat.

There’s this thing where trivia is mentioned for the sake of trivia. While on a longish journey there’s this line “if the party searches for an hour they find a dead axe beak.” Uh. Ok. I understand the intent. The next encounter is with some axe beaks enraged because of some hunters. But just dropping in some trivia is no way to go about this. It’s akin to saying, out of nowhere, “If a CN Cleric pronounces “DFWDFK:JD:L” correctly then a broken wagon wheel appears.” Uh. Great. And? Is that really likely to happen? I’m not bitching about the foreshadowing, or even giving a careful party a hint of what’s to come, but the way in which this adventure approaches it is a bit random.

Going along on this thread, the monsters entries are clumsy. They are quite lengthy, devoid of most stats, and rely on a standard format that is bulky and clumsy. The intent here was good: describe the monsters motivations and their tactics. But it’s done in a manner that obfuscates by being overly long and constrained by the mania to provide it in the same format every time. It’s like those dungeon that insisted on having a header to EVERY dungeon room describing the lighting, sounds, walls, ceiling,floor, etc. Or the overly long 3e monster stat blocks that insisted on listing EVERY detail possible. And there’s no fucking summary sheet! Dammit, go buy a copy of the Ready Ref sheets. I think they are still about $1. Look at half page of monster stats. Every fucking monster in existance described in half a page. But modern authors can’t be bothered to help the DM that much. Oops. Shouldn’t generalize. That’s my definition of evil.

Finally, this is supposed to be a few adventure. It doesn’t feel like a fey adventure. It feels about like an adventure that has “Elf (Subtype: Fey)” saying it’s a fey adventure. It’s devoid of life or imagination in that area. It tries in places, with lovers and special powers when holding a rose, and so on, but it’s not enough. It doesn’t have that otherworldly shimmery vibe that I’m looking for when I think of a Fey Adventure. Instead it would be labeled as “Several Subtype: Fey monsters!”, but I guess that’s not very good marketing?

Another of the little lost children that could have been.

3 Responses to The Last Prayer of the Dying