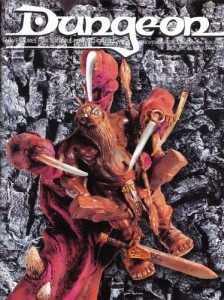 Jesus H. Fucking Christ I hate reviewing Dungeon Magazine. For every decent adventure there are 20 more crap ones. I perused the letters this issue, by accident. Some fuckwit had to correct every single error in the Planescape adventure from last issue. “You can’t use blah blah blah to enter Sigil. The rulebook says so. “ I hope you fucking die you piece of shit Samuel Johnson loving asswipe. I hope that your own personal hell is a limit approaching 90 degrees.

This is a rescue mission into a dwarven kingdom to save some emissaries and a crystal dragon. The dwarves inside are being manipulated into evil. I don’t think this adventure knows what it wants to be when it grows up. Because of that it’s a mish-mash of different styles. I had a very strong initial negative reaction to this one. The long & implausible backstory involves the use of crystal ball, repeatedly, to kick things off … but the ball can’t see the parts of the dungeon that have the powers behind the throne … even though it actually sees that area? The party is given a horn of blasting that is clearly meant to be used in a couple of set pieces, no doubt because it would be cool. Blast the front doors down! Blast the crystal throne in the giant set-piece battle! Uncool Perkins, Uncool. This goes as far as knock-proof doors. There are a couple of good things, like a dwarf name/stat reference sheet (that really needs “attitude” on it as well) and several of the rooms and magic items are quite interesting. But is it a stealth mission? A frontal assault? An exploration adventure? There are aspects of all three here. To some extent this makes it an adventure in the same vein as G1/Steading. But while that one had a very neutral tone, this one is less focused. Are we exploring the weird stuff or making friends or sneaking about? There’s something just off about the writing style … this doesn’t come off as a place to have an adventure in. It comes off as a style being enforced … but there are multiple styles being enforced. And … it’s got WAY too many words for a room/key adventure, as Dungeon is want to do. This thing needs a good rewrite to focus it. Neutral module/location? Exploration? Enforced plot? Pick one. In spite of my very visceral initially negative impression, this one has something to it … but it’s … only a first draft?

This sidetrek is the most implausible adventure I have encountered. The party sees a woman struggling to bring in a wheat crop by herself. Inquiring, they find out that her husband broke both legs and their farmhand left. Helpful PC’s encounter a series of problems over the week of bringing in the crop. There’s a scarecrow in the field. STOP! Any PC gets any whiff of a scarecrow is going to immediately go whole hog in destroying it. It’s like saying there are gargoyles. The adventure wants a series of small misfortunes to happen over a week. (A couple of good examples are provided, but a lot more would have been better.) Then the final night the scarecrow attacks. In reality the party is going to focus on the scarecrow and destroy it instantly. And if they don’t then they deserve to be murdered in their sleep. Shhesh. They call themselves murder hobos …

Uh …. While in a swamp the party finds a small palisade with a hut in it. Inside is a dying lizard man. he tries to tell the party about the giant mummy crocodile in the swamp. When the party leaves the small patch of dry land they are attacked. That’s it. About a long as a side-trek, with enormous amounts of backstory that goes nowhere. Seriously, the amount of text in this is amazing for what it is. There’s a nice bit of magic: a necklace of stone fetishes that acts as a ring of free action. If you’re going to put in a book magic item then at least touch it up a bit, like Jennifer did in this one.

The city is facing a group of grisly murders, and the protection money paid to the thieves guild doesn’t seem to be working anymore. The party is probably hired to get to the bottom of things. Unknown to almost everyone, wererats have taken over the thieves guild and are going to suck the population dry. There are some brief notes about the major organizations in the city, but the adventure is mostly event based. The amount of supporting information is quite light, which is going to make party progress beyond the events almost completely up to the DM and unsupported by the adventure. Uncool. The events are also so transparent that it’s hard for me to envision any party falling for it. The pickpocket is obvious. The party doesn’t set guards at the inn? The core concept here is a good one. The wererat philosophy is a nice one and they come off very good. But the adventure feels constrained by its length and/or the actual content that was chosen to be provided. Nicely, the king of the wererats may escape and come back for revenge. Nice potential for a truly interesting recurring villain. Or at least a murderous revenge plot.

Wild in the Streets
by W. Jason Peck
AD&D
Levels 3-6

I’m incredulous at what passes for an adventure in this issue. Three baby monsters have escaped and the party is hired by the guards to deal with them. The owner misrepresents them as a baby panther (displacer beast kitten), giant armadillo (dinosaur) and something else (a rust monster kit.) That’s it. There’s one or two words about how they react, but no real joy or suggestions of what to do with the creatures. And it took four fucking pages for this?

This is the one that broke me for this issue. This is the one that inspired my opening diatribe. It’s one fucking room. One room. ONE. Six pages long. One room. Meet an asswipe on the road who challenges you to a fight. It’s a clockwork golem that winds down in one round. Woman entreats you to investigate the basement. Basement has a poly’d demon. End. This must be the antithesis of good design.

Lately Raggi’s LOTFP designs have degenerated into pretentious crap. But the early stuff was GOLD. This entire thing would have one sentence in Pembrooktonshire, and it would have been better. It’s “Widder” as in “Widow.” While having tea the old bitch sees a ghost. The party is encouraged to investigate by a nearby butcher, instead of gutting her. Inside the kitchen they see a ghost with a pickaxe working the floor, which soon disappears. If they dig through the kitchen floor they two wizards trapped under rubble, just coming out of a stasis spell cast during their battle. Ohs Nos! Who’s the bad guy! A good wizard who’s “friend to dwarves and elves.” *Bleech.