Dragon’s Horde #1 – The Undertemple of Akron 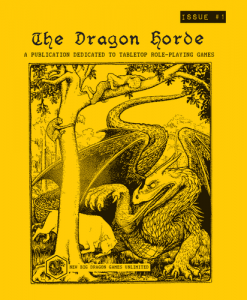 The Undertemple of Arkon
by Richard LeBlanc Jr.
D&D
Levels 1-3

[This is a periodical, and is my custom I’m only reviewing the adventure therein.]

“A recent report tells of a group of cultists disappearing into the ground where the temple once stood. Perhaps the cult is re-forming in some sort of underground lair. If this is true, then the gods help us.“

This is an underground temple to a panther god (ala Petty Gods.) It’s got about 44 rooms and is keyed in a VERY minimalist format, taking up about six pages of leisurely formatted text. Too minimal/Tegal for my tastes. There’s a highlight or two, all at the beginning, but not enough to avoid the “just another room with a monster” syndrome.

There’s a page of backstory (again, leisurely formatted, so only a couple of paragraphs) that tells of a mysterious giant panther, and the cult that formed around it. It was destroyed by wary villagers, and now rumors are circulating again that the cult is back. AKA, the usual. Attached on this page also is the wandering monster table … which makes little sense to me. Acolytes? Sure. Beetle, cube, undead? Sure. Bugbears and goblins? I don’t get it. The dungeon/undertemple has some captured bugbears, and a dead goblin, but they don’t seem to have any special relation to the temple. Monsters? Rescue party? Escapees? Just a couple of more words would have wonders here. “Escaped Bugbears” or “Bugbear rescue party.” The map is decent; large and lots of loops, a few secrets. It could, perhaps, use more features. Pools, circles, rubble, web, etc.

The encounters are a weird mix of decent and minimalist. The first half dozen or so are fairly decent, but then it drops down in quality quite a bit. Here’s a good example, from room 2:
This room smells sweet, with hints of pine and basil. The columns framing the doorway to the south are smeared with blood and spotted toward their bases with small bloody handprints. The fingers of the hands that left the prints are long and slender–otherwise, it might appear they were left by children.

A little verbose, but quite nice. Compare to this room, later in the dungeon:
Facing the door, armed and at the ready (cannot be surprised), are 2 skeletons with swords and shields

In the first eight rooms there are four or so that are quite interesting. Magical figurines, a slave pit … but then things drop off to “skeleton room” quality. There might be one more later on, with cultists pushing a bugbear at a panther in a cage, trying to make it eat.

The magic items are all +1 sword and +1 shield. The mundane treasure is “gold necklace” or “big sapphire.” This is not the kind of text that inspires a DM. The bloody handprint room? Great! +1 sword? Boring.

Too minimal for me; I’d quite disappointed that the rest of the adventure doesn’t follow the path blazed by those first few rooms.

1 Response to Dragon’s Horde #1 – The Undertemple of Akron