Sordid Stories from the Mother City 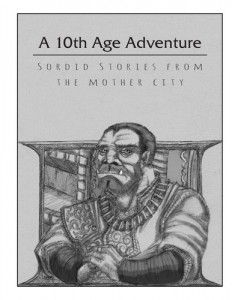 This is a short murder investigation that leads to an evil cult. It’s got several things going for it: multiple factions, people who act like people, random complications, and a presentation style that is “place and timeline” rather than event or scene based. It also lacks a bit of focus, which can be seen in its thirty(!) page length. Overall it’s a pretty good example of how to present an adventure. If it could be tightened up a bit and focused more on gameable content then it would be a sure winner. As is … it’s hard to recommend given my obscenely high standards.

Let’s cover the presentation style first. There’s a timeline presented very early in the adventure. Given no interruptions by the party, this is what the evil cult do when. This is a great start. The cult exists outside of the party. Plans are in motion. Things will happen. Complimenting this is a list of NPC’s the party will/could encounter in the city. Again, very good. You can run into the major NPC’s almost anywhere so grouping them together in the beginning makes sense. Finally there are a list of places. Here’s the old house on the hill, what goes on there, and how the cult uses it. Here’s the whore house, who is there, and what they know. Here is the bar, who is there, and what they know. The sum total of this is that the DM is presented with tools to use to build the adventure around. There’s no need for a railroad, the DM now has the power to determine the whats and wherefores of the actions the party takes. It’s a breathe of fresh air after some of the railroad crap I’ve seen lately. This is how you present an adventure with a plot. Or, rather, how a plot adventure can be transformed into something in which the party has free will. I’m pretty sure Justin Alexander just wrote something to this effect recently. Don’t prep plots, prep situations. Give the DM the tools they need. This adventure does that. Well, mostly.

One of the other nice things is that the NPC’s and minions are not completely one dimensional. They are at least 1.9 dimensional, and sometimes two. They act like real people. If you’re about to slit their throat they surrender, or talk. How many times have we seen slobbering maniacs who don’t surrender and fight to the death? There’s a place for that, sometimes. But there’s an even larger place for people (and monsters) with a fucking hint of self-preservation. When every thing the party meets just attacks until death then the party will no longer try to talk, or parlay, or capture. It’s just a hack-fest. The game is SO much more interesting when the monsters/opponents talk.

This leads into the faction play. There are at least two factions to the evil bad guys, and maybe more if you squint a bit. A is getting too big for their britches and thinks they no longer need B. B is just about fed up with A’s attitude. That’s great! In addition to this there are a group of monsters who might revolt as well as … ready? A TOTALLY UNCONNECTED MAJOR EVENT GOING ON. That’s GREAT! Zombie movies are not about the zombies. It’s about what people do when confronted with pressure. Similarly, the major event in this adventure adds complications to what the party’s already doing. It puts pressure on them and adds all new avenues of events. It’s great!

The adventure does a couple of other nice things, like having large groups of enemies (2d8 guards …) and giving some explicit advice to the DM about how to warn the party that at least one of the Evil Bad Guys is quite powerful. Fair’s fair. A 23rd level orc that looks like a normal orc is not fair. The party needs fair warning that he’s a 23rd level anti-paladin … then there’s no guilt when they charge in and you kill them.

There are two significant improvements I think would have turned this adventure into something really specials. First, a reference sheet. All of the NPC’s on one page in a table, where they are, a couple of words on personalities and maybe what they know. This is the kind of basic DM assistance that every adventure should provide the DM with.

Second, the descriptions are too wordy. They are full of trivia not useful to the adventure. This is usually what I’m referring to when I say something like “the adventure lacks focus.” If it’s not relevant to the adventure then it should almost always be trimmed. The usual sins are “history” and “NPC backstory” (which I guess could be called history also.) The trivia presented is only relevant if it directly impacts the adventure. Then we wouldn’t call it trivia. The adventure does this a lot, in just about every description of a place or NPC.

A good example is the whorehouse. We learn who founded it, and why. But it then goes on to say that the current operators have been running it for 30 years and no one remembers the former owners and only know the cruelty of the current management. Then what’s the point of the history? STOP EXPLAINING! I loathe explanations in D&D adventures. I don’t care where the fucking toilet empties unless the party can explore it. I don’t care about the history of the whorehouse unless it’s relevant to the adventure. The same goes for NPC’s. I don’t care about their twin sister unless it somehow impacts the adventure. It’s irrelevant. Focus! Focus on the adventure!

Unlike most adventures which lack focus, this one does provide some good content. After the backstory/history generally comes a sentence or two of descriptive text or attitude that helps you bring the NPC to life. This is a bit hit & miss. The whores get some decent personality/quirks but many of the other NPC’s could use a bit more … life? They need a quirk, something to remember them by, something to bring them to life. The tavern, where the adventure starts is a good example of this. The NPC’s there come off a bit flat, as does the tavern proper. It/they need something else to bring it all to life and really solidify itself in the DMs head.

Again, while not a good adventure it’s not really a bad one either. Hopefully we’ll see more, and better, in the future.

3 Responses to Sordid Stories from the Mother City