The Harvester From Outer Space 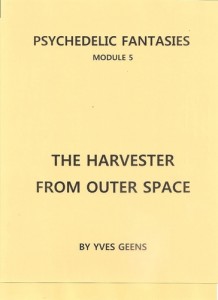 by Yves Geens
Psychedelic Fantasies
D&D
Fuck it if I know the level. 4-ish?

From the introduction …
As the PCs are camped out one night during their travels, they are caught in a bright tractor beam and with the deafening noise of blaring horns steadily pulled up into the ship …

She’s sweet brown sugar with a touch of spice!

Uh, I mean; this is a couple of levels of an overrun alien space, ala Metamorphosis Alpha. I’m totally in love with that genre, so I’m predisposed to liking this. It could be a drop in for almost any game system, but MA & Gamma World are both lacking a lot of content. It’s the usual Psychedelic Fantasies fare, meaning it focuses on the new & imaginative. Geoff’s PF line is really one of the best lines being actively published.

The adventure is a little ham-handed: you get tractored-beamed up to the ship and need to find the escape. After that, though, the goodness begins. Even if you’re not into Sci Fi in your D&D, this adventure presents itself well.

There’s a type of adventure writing, exemplified in some of the earlier TSR D&D modules, in which the adventure is explained through the room keys. In other words, as you travel through the keys it becomes more and more apparent what the deal is the dungeon. The summary is kind of built in to the descriptions by using the text. It’s nothing overt; you just learn more as more of the “picture” is revealed. This allowed those adventures to have, generally, quite short introductions/backgrounds. This adventure does that as well. The entire front-end is only a half page, and then the keys start. The party appears in room 1 and room 2 tells us that guards, “cronies of new boss Borzum, make money on the side by robbing new arrivals.” We now know that there’s some kind of boss/dictator thing going on, power just changed hands, and things are a bit rough and chaotic. From one short sentence a picture emerges and we view every other room from now on through the light cast by this second room. This is excellent design! No preaching, or monologues, or endless exposition. Just a short little sentence that communicates more to the DM than a page of backstory could. It empowers the DM’s imagination rather than forcing it to conform. This continues throughout the adventure, setting up several situations.

The rooms are imaginative and there are many memorable characters for the party to interact with. “Glorp’s Pad” houses a blob-like thing that loves to have his photo taken with visitors; photos of Glorp with other aliens cover the walls. He sells people jars of his own slime. How can you not love that? Imagine the difference if this were one of the endless number of schlock “standard” adventures. “The slime attacks!” Oh, that’s original. Slime that attacks. *YAWN* You know what’s more fun than a, ogre wearing a 10,000gp crown attacking the party? An ogre with a 10,000 gp crown NOT attacking the party. Every time the party meets this potential friend they are going to be thinking “man, if we had that crown we could pop a level, for sure!” THAT’S fun. The monsters and treasures are unique and wonderful, as they are in all Psychedelic Fantasies adventures. I’d go on about them but it feels like a broken record. It’s one of the core design principals of PF and it’s one of the reasons that the line is better than almost everything else. It brings the mystery and wonder that is missing from the book-standard stuff. The wanderers do things, and the room descriptions are tight enough to use during play while being vivid enough to spur the DM’s imagination: eight or nine keyed encounters per page, including monster stats.

My criticisms may be two small ones. First, it’s 2015. It’s time that the maps were better. I don’t give a crap about art, I want data. Put more data on the maps. I guarantee you I am printing out the map and putting it on my screen. What else can you put on it? Wanderers? Monster tear sheet? Second, there are factions here, at least implicitly. A little more work could have gone in to this aspect. It’s pretty clear that the minor godling and the crime lord/boss may be on different sides, as well as others. A few extra words, at the beginning or in the text, would have done a lot more to build up the real “living town” aspect of the adventure. After all, that’s kind of what this place is akin to. It’s an abandoned ruin that some folks have set up a town in. That’s means it’s a social adventure, and social adventures require a little more in the way of interaction.

Those are not anything other than minor nits compared to the content you get for $3 From the odious potion maker to the gregarious alien who wants to take selfies with you, this thing is a joy. A bit haphazard, but still a joy. Content is king.

I think PF has something like six or seven adventures in the line now. You could buy them all for about $20. It will be one of the best $20 you’ve ever spent on RPG material.

1 Response to The Harvester From Outer Space