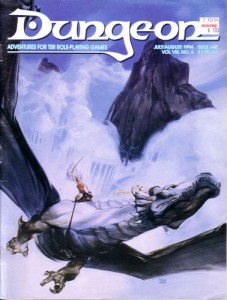 This is a weird little adventure. In a gnoll cave, with 70-some odd gnolls, the party is turned in to gnolls by a wish. There’s then a little straight-forward cave system. The cave adventure has a nice three-levels-on-one-page map with ten rooms, but the encounters are generally nothing to speak of at all. There’s some snake skins and a lavender mold which is nice, but otherwise it’s just “3 giants in the room” or “a cave fisher.” The noteworthy part of this adventure is that the party is turned in to gnolls in the first room. This is a bit of a railroad, but it’s also presented in such a way that it’s actually the hook … and the hook is always allowed a bit more leeway. There’s a bit if roleplay around this, as the tribe interacts with the party, but it’s otherwise not really a part of the adventure. I find this quite odd. It’s almost like a random event, but presented like it’s one of the chief components of the adventure. Half-measures and potentials not realized.

The Oracle at Sumbar
by Paul D. Culotta
AD&D
Levels 3-6

This is a strange little thing. It’s wordy, convoluted, straightforward, and weirdly enjoyable. Dungeon is full of exposition, every adventure being more wordy, by far, than it need be. This one goes even further though. And yet it’s focused. You’re implored to help a woman with a debt by selling a book for her. Each of the potential places you might stop is detailed. One of them leads to an Oracle. Hiring a ship takes you to the oracle and then on to the treasure of a pirate king. There is the usual “you were tailed and now they pop up at the end.” There is a great deal of advice given. There are a great number of … paths? explored. There’s a great number of small interesting things going on, It is a very richly environment that is painted.That rich environment is always what I’m after, however I’m generally looking for a much terser application of the principal. Given a good read-through I think you could run this WITHOUT extensive notes prepared in advance, or maybe not even a highlighter. This speaks to the skill of the writing, particularly given how wordy it is.

This is trying to set up a little fairy tale/folklore adventure. Halfling apple trees are poisoned. The cure was stolen by a giant. What follows is supposed to be a charming little adventure, with giant wives & daughters, giant wooden spoons. What we actually get is a standard little giant house layout with the usual things in it. The problem here is that it’s presented as a straightforward “explore the house” adventure when in fact it’s not. While the chief giant is an erudite fellow not inclined to violence, and the other giant women strike generally to subdue, it has no … charm? It’s clear what is SUPPOSED to happen, but it’s all up to the DM to make it happen. Hmmm, that didn’t come out right. The adventure, as written, has a certain tone to it. If you’re familiar enough with folklore you can ignore the presented tone and mold this in to a good adventure.

Uh … a small tower with some orogs and ettins in it. The hook is that the party is lured there by an enchanting song. It’s a harpy polymorphed into an elf as a child and raised with no understanding of her past. This is clearly the most interesting part of the adventure. As a nice way to introduce a long-term NPC quest-object it would be great … if a little long. The core adventure is just a throw-away while the “further adventures with the harpy” section contains mostly generalities. Had it instead laid out some specifics then you’d have great advice for taking the elf/harpy NPC and integrating it well and fully into your campaign: lots of hooks, lots of adventures and quest ideas. Instead we get sentence after sentence reinforcing that her voice is enchanting. Ug. And people say _I_ beat flog my grounded horses!

The party must escort a fallen paladin, who’s afraid of spiders, in to a cave with spiders and a drider. That’s it. There’s nothing to do. You get to help a pompous ass. Yeah you! The cave has 5 encounters. All straight-forward spiders. Zzzz……