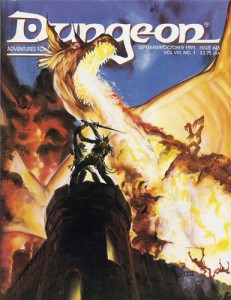 Switching to Google Docs for writing. Let’s see if that helps with the auto-correct.

1-on-1 adventure. L.A.M.E. But it’s a REALLY good one. Yeah! But it’s Yet Another Adventure Based On The Movie Alien. L.A.M.E. But it’s has some decent atmosphere. Yeah! But it is STILL a Dungeon adventure, meaning the atmosphere is few & far between. L.A.M.E. This is a kind of combination Alien/The Thing adventure for 1 party member. You’re trapped in a border trading post during a blizzard when one of the guests has a slaad hatch out of them. I fucking love Slaad. This thing is organized for shit, laid out over multiple columns, keyed room descriptions and time based events mixed in. There are hints of greatness here, ruined. “Try to build sensation of dread. For example, when the player goes outside they could be buried in snow from a roof snowslide. They hear footsteps stalking closer but can’t see … the NPC coming to save them.” or even “When the NPC give suggestions they should be tailored to their personalities. For example, the orcs will suggest using someone as bait, and not really care about the baits survival.” Hints of greatness. What this adventure needs is MORE of that and less of the senseless exposition it goes into. A simple timeline, with events on it. A simple list of NPC’s, with their personalities. A list of flavor suggestions for building dread. The writer MUST have had a vision for this adventure. The purpose of writing it down in Dungeon is to effectively communicate that vision to us, the readers, so we can recreate it. That’s not done here. That’s too bad, for what little is present is very good. If you wanted to salvage a horror adventure then you could use this one IF you put a lot of work in to it.

Oh Jesus H. Fucking Christ. A magical industry that makes water elemental powered flatboats. That’s right Roger, just strip all of the joy and wonder of magic away and turn it into another fucking steam engine. And you’re transporting cockatrice specimens, among other things, and the adventure is not a farce. New to town, to get the job you need a reference from the guild in question, two from other people, or a reference from the towns wizard’s guild, or a 500-gp bond. All for 50gp. Uh …. What’s the likelihood of any of that? How about we just burn down your fucking boat and make massacring the town the adventure for this evening? SO many adventures, especially in Dungeon, are like torture porn for the DM/players. How much bullshit will the players put up with from the DM in order to play D&D tonight?

There are hints of the hoped-for farce: a wizards convention, loading 500# of cheese on to the barge, and so on. but it doesn’t go there. There are a dozen or so linear encounters. The first few are pretty decent, setting up some classic situations, like riverboat grifters and a union riot. After that it gets a bit rougher as the boat moves on to an underground passage. There’s a trading post with potential, and a couple of encounters with potential, like a lone dwarf who’s lost his friends and kobold bandits, but they tend to lack the color needed. Lots of text here, but you could salvage something worthwhile. If you wanted to work at it.

Uh … 1 encounter? You camp in a clearing, get charmed by some lights and fight a tentacle monster. It’s not labeled as a Side Trek, but at four pages maybe even Side Trek has some standards? Although four pages for one encounter seems more than a little excessive. Wait, what am I saying?!?!!? It’s Dungeon Magazine! I’m not even sure why this is labeled as Dragonlance.

This adventure revolves around setting up one encounter: a ruined hill fort defended by the party being attacked by some gnolls. There’s a little bit of role-play in town and a couple of encounters before the fort, but the fort encounter is clearly why this was written. Given a ruined fort the party has to hold out against a band of 22 gnolls and a few leader-types. I like these desperate last stand type adventures; there’s a few in the Troll Lords Death in the Treklant series that are nice. For this to work you need an environment dynamic & colorful enough for the party to use their brains to come up with defenses. Given a ruined fort full of stuff, MacGyver/Hannibal your way to survival. To do that you need things to work with. This adventure doesn’t do that. It instead has a small keep in the fort and assumes you’ll be there. Eh. Go buy the Treklant adventures.

I’m not sure it’s actually possible to play this adventure, it’s so complex. Or, rather, the creatures are so complex. Essentially the characters will be invading a Githyanki complex near Neverwinter. Inside they will face about 8 different types of Githyanki opponents, each with a complex array of different powers that the DM must be familiar with. Once this task is done the party must then travel to the astral plane and do it all over again, but this time in a fortress of about 100 Githyanki … each with powers and ability and immunities and strategies to keep track of. OD&D monsters were easy, even the mind flayer. 90% MR and a simple table for mental blast. With the advent of the Splat Book we now have an adventure that needs all the core, plus Complete Psionics, plus Tom of Magic, and also maybe Manual of the Planes and the Outer Planes Appendix to the Monstrous Compendium. And you need to be familiar with all the Githyanki sub-types and their powers.

Frankly, I don’t see how this is possible. Any sane person would use stealth, but even then … Besides, the adventure is boring and lacks any interesting detail. It’s just a ‘sneak through the fortress and don’t trip the generic alarms’ adventure, with nothing fun or interesting or evocative in it.