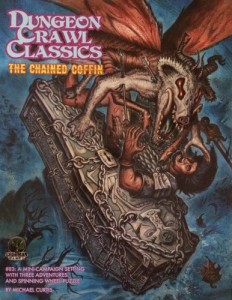 A whispered voice calls from a coffin bound in chains, urging the heroes into the depths of the Shudder Mountains, a place rife with superstition and forlorn secrets. In the shadowy, pine-grown valleys of the Deep Hollows lurk mysteries of a bygone age and a new evil emerging from the ruins of the past. The adventurers must plumb the mountains’ secluded reaches to root out this rising terror before its power comes to fruition. Standing in their path are cackling witches, subtle devils, lingering spirits, and a foul thing that moves in the night. Can the heroes appease that which lies within the Chained Coffin and thwart the dawn of a new and terrible age?

Yet another breath of fresh air from Goodman/DCC. This is an overland journey through Appalachia, toting a coffin to the big bads ceremony site. It’s got a nice rural/mountain feel to it. Many of the encounters start out with a good premise, but fall down a bit on the specific inspiration and on the environment options. What I mean is that there are strong arch-types presented: the devil at the crossroads, the old Appalachia witch granny, the in-bred family (this time 10 feet tall!), and so on. Those are all very strong platonic models. The SPECIFICS of each could be a bit stronger. Granny’s yard, her porch, inside her home, etc. Curtis takes a good shot at trying to do a nice set up but falls short on the adjectives/adverbs.

I guess this was a kickstarter? Some kind of boxed set? I bought the stand-alone booklet at GenCon/14, so that’s what this review covers. The hook is a simple one: while rolling through some village the party comes upon the bumpkins in a quandary/state. There’s an OBVIOUS dungeon entrance that has been revealed by a landslide. The salt of the earth are in a tizzy. A bit of work uncovers hte door completely, and inside, after dealing with some undead baddies, is a coffin all chained up with symbols of evil on it, and a voice from inside asking for help. I have no idea why this is appealing to me but it SO is. Some combination of in medias res and an OBVIOUS trap/set up. It turns out it’s NOT a trap/set up, but the moment is still the moment and should be quite enjoyable. Just wandering along and something else happens nearby. The idea that the world is alive around the players. Also, an unnatural love for villagers who are morons. ALL of that contributes to my love of the set up here. Combine that with coffin gimmick (including evil looking coffin handout!) and oh man! There’s nothing more fun than putting something obviously bad in front of a persons face and giving a hook in which the PLAYERS want to pursue it. In this case the coffin ISNT evil, but there will be so tense minutes in which the party debate that fact and those moments will be DELICIOUS. Curtis may have some description issues but he can do a good hook when he wants to (Court of Chaos, this) and a bad one when he doesn’t (Android Underlords.)

From there the party has a kind of time limit. The coffin-dweller needs to be taken to a ceremony site in the mountains to stop the big bad from becoming a chaos knight type thing. But he can’t leave the coffin. Nice gimmick that should lead to TONS of fun. 🙂 “Why you boys toting around that coffin chained up and covered in evil holy symbols?” “Hey, what’s going on out there? I can’t see, I’m locked up in here, remember? What did you say? Flagon? Why are we hiding from a flagon? HEY! WHY ARE WE HIDING FROM A FLAGON?” (No, there’s no flagon, but you get the idea.) There’s also a time limit. From the time the party hits the village at the base of the mountains, they have 7 days to get to the ceremony site. If they are a distrustful sort and check out the coffin-dwellers story, to confirm he’s a good guy, they loose a d3 worth of days. Very nice. Choices and risk are at the heart of good play. The little mountain village is a joy as well. I wouldn’t call it even “briefly described” in any meaningful sense, but in spite of that you get a STRONG feeling of what it’s like. This comes from two parts. First, there’s an Appalachia song in an inn (lyrics related to the adventure) as well as some general descriptions that immediately cement and bring to mind the rural mountain vibe. Secondly, there’s a GREAT rumor table. FOr inspiration, it’s wonderful. Each entry strongly brings to mind a little scene to run it. Sure, you can read it verboten, but instead why not have the party overhear two farmers buying 100# of yeast and some copper line talking about the troll scat near the river banks, and how ain’t no one ever seen nothing more yet. Fantasy, strongly rooted in familiar tropes and archetypes, but NOT the generic tolkein-esque settings that so many rely on … that’s a VERY strong point of these DCC adventures. ‘Appendix N’ is great, most DCC falls in to that category, but this adventure shows that they can branch out from N and still pay respects to the non-tolkein fantasy & folklore that Appendix N represented. This is SUCH a breath of fresh air. And not just generic fantasy with Lovecraft thrown on top. Rooted in the american myths but STILL clearly fantasy. My heroes have always been John Henry & Pecos Bill.

I’d like to touch on the overland a bit here, to add emphasis to the above points. They are all quite strongly rooted in americana. In generic-land there’s the grave of a bard who used to travel the mountain valley. In americana there’s a fiddler with a drawl and a magic fiddle, just yearning to be rosin’d up again. The context is SO important to imagination. That’s what all of the waiting line theming at DIsney is for. The 1E DMG has a bag of beans. But put the same thing in field of giant crops and a little boy and it transforms. 5-6 minutes of thought and you get something more. There’s a crossroads where you can sell your soul. There’s a mountain granny. There’s the Bigginty’s farm, a family of hill giants. A ghost in a rural cabin who wants you to get rid of other ghosts. Each of these is a strong theme that you can play off of well. They also JUST miss the mark of being rock-star level. Granny’s hard has “numerous animal skulls, bleached by the sun and weatherworn, dangle from nearby tree branches or stand impaled on tall stakes around the cabin.” That’s pretty good. That’s not rock-star though. The problem (I’m conjecturing here) is the lack of specificity. We get a GROUP description. That group description is ok. But it’s not singular, and because it’s not singular it …. is dull in the mind? Curtis has tried to describe a scene and in doing so described a group of skulls. I would suggest that a much more powerful image could be obtained by concentrating on something specific and THEN going to the scene. A lone coyote skull, bits of stringy flesh & sinew hanging from it, bleached by the sun and surrounded by flies, hanging from a rough jute web from a a fallen-down fence-post. IDK, I suck. But something specific, and THEN go to the group thing. As it is, it’s good.

I’d also like to give a nice nod to Curtis explicitly covering travel times. ow many hexes per day on the map, in which circumstances, and tying it to the timeline of the adventure. A surprising number of adventures relay on time limits or travel and DON’T do this. It takes like 3 sentences and keeps me from having to go look stuff up and work out te scale. Thanks.