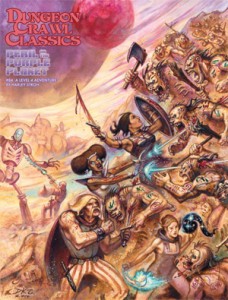 The Purple Planet: Where tribes of man-beasts wage an endless war beneath a dying sun. Where mighty death orms rule the wastes, befouled winds whistle through ancient crypts, and forests of fungi flourish in the weirdling light. Where ancient technologies offer life … or a quick death.

Bereft of patron, friend or god, your survival depends on quick wits and a strong blade. Will you and your companions stand as conquerers atop this alien land? Or will you fall beneath the blast of an ink-black death rays, just another corpse left to litter the wastes of the Purple Planet?

One of the best published adventures. Ever. It fits. You need this. Harley Stroh is surely the latest to take up the banner of a race of romantic dreamers.

This is a gonzo sandbox hex crawl under an alien sun, but it would fit in just in an underdark cavern or some such. The party ends up on the purple planet Stargate-style, trapped in a pyramid with bad air. To get home again they need to find a new powerstone to charge the gate. That’s pretty much as simple an appeal to a trope as it gets, and yet it’s done masterfully. The pyramid is simple, two rooms. It’s deadly with stale air. It’s got a withered skeleton king on a throne illuminated with the dying light of the powergem that brought the party through the gate. It’s FLAVORFUL. It put into your head the scene and your mind fills in the rest. This is EXACTLY what the encounter description is supposed to do. Not spoon feed. Not bore you with detail. Not be so generic as to be meaningless. It inspires.

Breaking out of the pyramid you encounter a huge warband/horde of bipedal humanoids charging the pyramid. Eeek! Talk about In Medias Res! Then another war band rises up out of ambush and attacks! Chaos! All Hail Discordia! They fight over banners hung from war lances! War lances which are obviously alien death ray rifles! If they see you on the pyramid they both attack! Helping one side or another can lead them to victory and you can all jointly lot the bodies of your slain foemen and take trophies and feast on strips of raw flesh roughly cut from the bodies! Wait … what? Oh man, if that opening don’t hook you then your soul is dead.

In front of you, splayed out for your viewing pleasure, is the terrain of the plateau you have arrived on. This place has EVERYTHING: Weirdling sun, mushroom forests, stinking lakes, purple mountains majesty, lights, psychos, Furbies, screaming babies in Mozart wigs, sunburned drifters with soap sud beards. By this time you’ve learned you’re REALLY not in Kansas anymore: you might have made some allies, you’ve found an alien death ray rifle, and you know you need a powergem. Let the crawl begin!

The tools you need are here. How far can you travel? How far can you see? Both of those are covered briefly but quite well. That’s the mechanics. And then there’s the flavor. What keeps a hex crawl going is things to do and places to be. Harley adds those with tables. The humanoids have a nice table that can be used to add variety. There’s a GOOD table of random encounters, brief but each with enough detail to run with it. A table for ancient relics. A table for looting ancient cairns. This is the make it or break it part. Yeah, there are fixed encounters to go see. But the adventure builds by the random shit happening in the hex you cross to get from point A to B. Each random encounter, each thing, has a little burst of flavor to drive the thing home. THAT’s a hex crawl. That’s what a lot of the Wilderlands did. That’s what a lot of the HCC encounters do. That’s NOT what Isle of Unknown did. When I talk about wanting to know ‘what are wanderers up to?’ it’s for that reason. Unchock the wheels of the cart and give it a slight shove. Where it goes is then up to the party and the DM running the thing.

You’ll be wanting an example? How about an ancient throne room, replete with massive thrones. On the walls surrounding are grizzly trophies from the battles that wage without. Atop each throne is is a massive but spindly android, without a head. At the feat is a sarcophagus, containing the head-in-a-jar of each of each of the Masters. Awakened, the androids try to reach their heads and attach them, or perhaps the heads zoom about the room firing off death ray. Each Master replete with their own personalities and goals. This stuff is GREAT.

If I have a complaint it’s that it is too short. There might be seven fixed locations. Like a greedy boy shoving turkish delight in his mouth I want more More MORE! Is it ACTUALLY too short? Almost certainly not. But it the kind of product that makes you want more. Alien artifacts to play with floating heads in jars that attach to giant android bodies. Smoke monsters. A citadel carried on the backs of slaves. (WTF?!) Giants sandworms to ride. It’s a ripped off mashed-up madhouse of Chaos and it’s wonderful in every way! Three of those locations are the resting places of powergems, one of which you need to go home. Will you brave the slave-toted smoke citadel masters, the fortress of the heads-in-jars masters, or the abyss holding the mother of all sandworms? Factions. Intrigue. Crazy giant worms to ride.

Is your soul dead? No? Then why don’t you own this?

7 Responses to DCC #84 – Peril on the Purple Planet