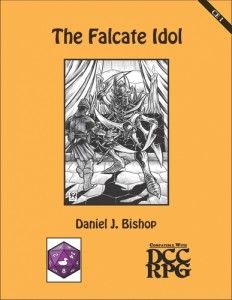 The Cult of the Harrower is ancient, and each of the eight eyes of its spider-idol is rumored to be a moonstone gem the size of a pigeon’s egg. Moreover, somewhere within the cult’s sanctuary, a pool flows from the Egg of Creation. Will your Thief seek to make a legendary score? Will your Wizard pursue the shards of the Egg? Will your Cleric join the cult? Or will your Warrior fight his way through the web-covered passages to rescue them if they fail? Any or all of these scenarios are possible!

This is an adventure through a ten room temple. It uses the same simple map that The Twice Robbed Tomb, by the same publisher but a different author, uses. That’s a clever and interesting idea. Or, it would be if the map were any good. I’m not sure if people are cueing off of the official DCC adventures or not, but the VAST majority of DCC product I’ve seen has had very simple maps. Linear, or nearly so. I have overlooked this in the past, maybe because I use DCC so much as one-shots. A complex map can lead to an interesting exploration element, where the PLAYERS feel lost and confused, but not in a bad way. In a manner that enhances a kind of Fear of the Unknown. Where am I? What’s around the corner? Is something going to come down that hallway behind me? The characters turn the unknown in to the known through their explorations … but those side corridors behind you always provide some risk, some questions, some GREAT BLACK VOID that might be COMING TO GET YOU!!!! But these maps don’t allow for that. Maybe that’s ok, since DCC has a different vibe going on. But I’m leaning toward it not bing so …

Ok, temple. This is supposed to have a kind of Lieber/Conan “Spider God” thing going on. It doesn’t do a spectacular job of it but it does deliver that flavor much more successfully than, say “The Spider-Gods Bride” does. There’s one priest and a couple of monster guardians hanging out … but then again there’s only ten rooms. The theming is of a kind of horrible spider/crab hybrid, with the initial chambers being devoted to cobwebbed bodies in alcoves and vessels to sacrifice blood to. The entire complex TRIES really hard to bring the vibe, but I don’t think in the end it works out well. There is a kind of … mundane thing going on in spite of what the adventure is trying to do. A room full of fresco’s, hiding vestments and a concealed door. Well, ok … but tat’s not really interactive, is it? Or FANTASTIC. The same for the entry room with the alcoves full of webbed bodies. Ok. But where’s the interactivity? Where’s the SHOW in show, don’t tell? The descriptions lack the evocative nature to transmit a picture by themselves and the lack of interactivity means that a great many of the rooms feel flat.

The rooms also lack something else, something CRITICAL to a DCC adventure: stuff for the players to riff off of. The environments are not interesting enough to support very good Mighty Deeds. The locales need more stuff in them, especially if you anticipate combat. This could be done very matter of factly … “and then I’ll put in a big kettle so someone could use it!” or, better, much more naturally … “a kitchen should have a bit wooden prep table, covered with knives, and boiling kettle over a big hearth in the middle of the room and maybe some giant hog legs hanging from the ceiling …” That’s some stuff that the party, and creatures, can use to spice things up.

In contrast, the monsters and treasure are strong, as they are in most DCC adventures. New monsters bring the horror of the unexpected and good treasure, magic or otherwise, bring on the SPECIAL nature of the reward. You’re not getting crap. Heroes don’t get crap. Heroes get some of the parts of the Egg of Creation. Hell Yeah! Some of the monster descrptions are REALLy excellent, such as the transformed former thieves, who’s faces/heads are nearly transparent and filled with webbing. “Their faces look transparent, like glass which has been filled with a hollow radiance.” …”If examined closely motes of darkness can be seen moving within them. Their bodies are actually filled with a tight network of shining spider webs, and the black motes are spider-like moon reaper young.” That is some REALLY good writing. It communicates well, to the DM, what is going on with these creatures, thereby assisting the DM to, on the fly, run an encounter that is going be very impactful to the players. I want ALL of the writing to be like that. Terse, and communicating with pin-point accuracy an evocative scene that instantly springs to life in my mind … which I can then use to turn the room.

I want to call out a couple of other things that the designer has done that are quite nice. First, he’s done a great job with a curse that comes right out of appendix N. Steal the main jewel from the idol? You’re cursed and the temple statue, now animated, hunts you down until all of it’s jewels are found and replaced. That’s a GREAT curse AND a great was to continue the adventure and give continuity to things after the adventure is over. He gives the statue “HD4+200” hp, which is also an interesting idea, that, in retrospect, I think I’ve seen a couple of times before. That’s a nice way of putting in a lower level opponent but still giving it the staying power that “more HD” that more HD are usually used to represent. Finally, the designer recognizes the power of Deity Disapproval in DCC. This being a temple, there are several opportunities to sneak about by making sacrifices to the spider god, wearing the vestments to sneak about, etc. These are things your own Deity won’t approve of, and thus your disapproval rating goes up. Nice way to handle things.

If you’ve got any amount of talent in you you could probably make this adventure come alive. It does a lot of thing … if not well then much better than the vast majority of adventures. I have very high standards and so what a pass for me may be a Must Buy for you. I wouldn’t hesitate mentioning this is someone was looking for a new DCC adventure … it just wouldn’t be at the top of my list.

EDIT: Corrected my mistake regarding the authorship of Twice-Robbed Tomb.

3 Responses to CE1 – The Falcate Idol