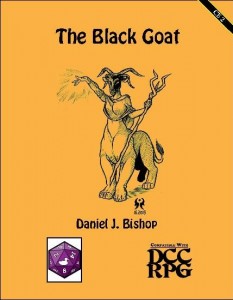 Not all mountain passes are lonely.
Come meet the Mahmat Troth and the One they adore. Only in the high pass will you discover what the Black Goat truly is.

Go read that publishers blurb again. Pretty cool eh? Well … not really … Or maybe it is. I don’t know. Because this isn’t an adventure, it’s a place. There’s nothing wrong with that. I’ve often thought that it would be cool to do a series of products around medieval ‘businesses’, describing what they do and how they do it, with floorpans and some personalities. A rope walk, for instance. Then you could use that in your game. That’s the intent behind this product … it’s more place than adventure … which means, no matter how cool, I probably would not have purchased/reviewed that if I known it. Which, in a way, is the entire point of me publishing my thinking n these reviews: ensuring everyone else doesn’t fall in to the mistakes I have. It doesn’t matter how good the chair if in fact I thought I was buying a loaf of bread. In the end, this is a missed opportunity.

This describes a mountain pass that houses an oracle: The Black Goat. It has maybe eight encounter areas and three or four factions briefly described. There’s the Black Goat proper; the oracle that lives in the cave. There’s the tribe of creatures that live outside of the cave and serve as her … minions? There’s a handmaid in the cave as well, pulled from the tribe, who may have her own thing going on …. But only if I stretch things REALLY far. Finally there’s a tribe of different creatures that live down in the valley under the mountain pass. The two tribes mutually hate each other (Frankie!) and ownership of the pass, and thus the right to be minions of the Black Goat, sometimes changes hands. And, I’m sorry to say, that’s about it. Well, there’s a patron table for the Black Goat.

Oh, there’s other content here. A description of the tribal camp in the pass, a rumor table, a description of the Goat and her quarters, of the treasure cave, and so on. But it’s not really anything interesting, or of value. What’s present is a kind of general fact-based overview/summary, instead of the individual detail that would make for hooks. Do you want to know that there are 20+1d12 adult males and 4d14+20 adult females and 6d12 children and blah blah blah champions? Or do you want to know that Bob has a crush on Sally who’s father is the one that deals with traders and who secretly had a love affair child with a member of the opposing tribe? Both tribes are given a nice general overview which makes them REALLY interesting. The mountain pass tribe then gets a bit more, essentially detailing how many there are and how they eat gruel 24×7. But anything extra which would bring the situation to life is missing. One could argue that this is the job of the DM. One could also rebut that by saying: then why the hell did I buy this product in the first place if it’s my job to add everything? I would never argue that the DM doesn’t have obligation to bring the detail to life, but I WILL say that it’s the job of the designer, through the product, to inspire the DM to bring it to life. I’m not talking 24 pages on the ecology & diet of the tribes. I’m talking an extra sentence or two or paragraph to bring the thing to life … in exactly the same way the detail about the tribes does. The general overview of the tribes is short and is GREAT. But then it goes nowhere else … except in providing some mundane detail.

The Goat, her handmaid, and the four or so caves suffer from the same problem. Generic detail. Her quarters are ‘lavish.’ The treasure chamber has ‘bags of rice and dried meats and more lavish fare.’ Nope, that don’t cut it. What kind of rice? What kind of more lavish fare? SHOW don’t tell. Don’t say it’s lavish. Don’t say it’s opulant. SHOW why it’s that way. Describe it. That brings it to life in the DM’s mind and let’s them hook off of it. The rumors are more of the same. Generic and uninspiring. ‘The people beyond the pass are passionate traders.’ Well, ok, I guess I could do something with that. But a beggar noting how we was traded out of his lifes possession, in a fair trade, with the people beyond the pass, gives many more opportunities.

This product has a lot of potential. The core idea is a good one. The tribes are GREAT … from 10,000 feet. But it fails to deliver beyond the elevator pitch.

2 Responses to CE2 – The Black Goat