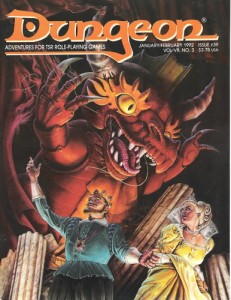 There was a Science Fiction in … Analog, I think, that recounted a bunch of human authors on an alien planet that treasured literature. The aliens hated the human literature. Their own recounted every detail possible of every thing possible in the story, giving the reader the complete context of EVERYTHING that occurred. Reading Dungeon for 39 issues, I can relate …

This is an assault/recovery mission in some caves high up on cliff where some vultures live. Five or six pages of introduction give way to about four pages of adventure. The kobolds in the caves are commanded by an Urg who has trained some giant vultures to compliment the standard vultures that live on the cliff. The content here is quite dry and not very evocative, with lame treasure to supplement a lame and boring backstory. On the plus side it seems like this is quite a hard adventure for 0 or even 1st level adventurers. The lair is laid out well and the vultures and *limited) third dimension used to some decent effect. The caverns, in particular, on the cliffside are handled in a nice way, giving enough extra detail to transform the location from “generic caves” to “that vulture place on the cliff! Remember!” The environment reminds me a bit of one of my favorites: the troll lair in 100 Bushels of Rye. The environment here is well worth stealing, and if the treasure was better and the descriptions more evocative then you’d have a fine adventure.

Sadly, this is just a collection of nine encounters for your Spelljamming. There are some decent things mixed n with the boring/normal encounters. A dead kid in a wooden chest? Cool! There’s also an interesting NPC you can run across, a pirate, and a group of Ogre whalers, all of which are at least a little interesting. The others are less so, to varying degrees. The undead is nice little idea but not evocative enough to be a decent encounter as written. The Ogre whalers, in particular, are a lost opportunity. They’ve got a great little idea going on but their personalities are ignored in favor of treating it like a combat encounter. The pirate encounter is similar. Both would benefit from being written more neutrally with the NPC’s have more goals. Spell jammer is one of the greatest D&D settings EVAR, and there’s a lot of ideas here to steal from and expand in to something decent, and little to run as is.

This is a GREAT encounter with a group of dwarves bandits and their lair. It’s got a great vibe going on and is one of the few things I’ve seen in Dungeon that you could run as written. The backstory is kept at a minimum at only one page. The idea of a group of evil little shit mercenary dwarves is a pretty sweet one, and appeals to my “old fairy tale dwarf” nature. Their lair is a short little ten room place, mostly linear, but with more adventure in it than Dungeon adventures that run 35 pages long. There are at least three groups of people in the small place that you can negotiate with, including crabmen and a vapor rat! For being such a small place there’s a lot going on. The map has a variety of features, from sinkholes to water clogged tunnels to shelves and columns. It feels more like a “Real” cave than most adventures do. The adventure relies on the Tome of Magic quite a bit, which lends the magic items a more non-standard feel. This is supplemented by an intelligent weapon and mundane treasure that it more than just a throw-away description of generic “gems worth 200 gp.” Black bears, giant crabs, lizards, chimneys … the list of interesting things go on and on without BORING you to death with it’s verbosity. You could mistake this for one of the GOOD adventures from Fight On! Magazine. Great job Jasper! … too bad this appears to be the only thing you’ve ever written …

This is a simplistic 22-room ruined temple. And by “ruined” I mean that on the map the rooms have fuzzy walls that represent “rubble” near them. Sigh This continues the long tradition of BASIC D&D adventures treating the players, and DM, like idiots. It’s full of very basic advice and seems written for Jethro’s 6th grade education. And a decent amount of the advice stinks: “The heroes could attempt to climb the walls. Discourage this since it would allow the PC’s to avoid most of the encounters.” What boring and unimaginative advice. How about instead you reward players who think creatively instead of blindly imposing your railroad will? In spite of this I’m conflicted. Or maybe it’s my three Old Style lunch. There’s a certain classic feeling here, in places, that I can get behind. The backstory has villagers trying to reach the healing water in a pool that the ruined temple contains. A place of legend that only the most desperate will seek out for its healing powers because of the dangers … that’s a nice thing going on and there are bodies of villagers throughout the temple who have tried their luck. That adds a certain ‘living’ effect to the temple that I can really get in to. Combined with Stone Golems with 8hp, magic stone axes, spider web bundles, and a boss battle that may be un-winnable, it gets my seal of approval. But for Vcna’s sake, let the characters climb the fucking walls!

Oh Wolfgang, really? Someone needs to fail a save vs magic in order to go not he adventure? For serious? This is a mythic Viking adventure, or perhaps “encounter” would be a better word, and a decent one. Baur does a good job with the introduction, giving us a hook of mythic proportions, perfect for a group of viking bravos to undertake … a ghostly woman in a hot springs! And then the descriptions of the ethereal tale is “there’s a fire giants daughter in a skirt and having a sword.” Not quite the evocative setting one was led to suspect from the backstory bardic story. Anyway, if someone fails their save then the adventure may continue. You need to go visit some fire giants to try and free the fire giant daughter from her asshole father domination. What we get is a little mini-tale of a viking homestead, but with fire giants. The giant, his dominated wife, asshole sones, and beaten troll servant and dogs, are all in a cave, along with the daughter. What ensues is a little micro-casm of viking society, where the giants must be bested in order to free the daughter from her fathers clutches. It’s a decent NPC–monster encounter, although the giants are a little one-sided in their personalities. But at least they HAVE personalities and you don’t have to just slay them. The contest proposed are a bit generic. That’s sad. You’re going to need to embellish a lot to turn this from a rough outline in to a stunning adventure, but the core of the ideas are all there.

This is a one-on-one adventure with a cleric PC. You go to a monastery in the mountains only to find its occupants slaughtered and a blizzard settling in. Then the next morning a yeti attacks! At least it’s only four pages long. Enjoy the 11-room monastery and prepare for the yeti’s return. Uh, and be bored. Because there’s nothing to do here except get attacked by the Yeti after 12-ish hours of game time.

Oh boy. This is an investigation adventure in a magical ren-faire theater. Magical chandeliers. Illusionists creating theater effects. Potions to help the actors. It’s enough to make you puke gorbels. It’s a social adventure and there are plenty of NPC’s to interact with, with various personalities and motivations that will recognizable. The party shows up, looks around, interacts with some NPC’s, and then interacts with the main NPC to get a kind of a mission. Then some NPC’s attack, the play goes off, and the major attack comes. The evil NPC’s are GREAT, but not used well. They just end up attacking the party without interaction so their various quirks and qualities and goals and motivations are almost completely lost. Essentially, the party is just watching events unfold around them with little chance to do anything about it, except stab someone when they show up and attack. That’s pretty poor design. The evil NPC’s need more of an ability to interact with the party to get their full effect, and the events presented could be laid out better, with a nice timeline and more petty incidents going on. Yeah, I hate this kind of magical ren-faire shit, but if you’re going to do it at least do it well.