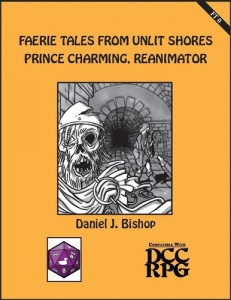 Prince Hubert Charming, son of the Baron of Westlake, and heir to Westlake Manor, is well known as a cold man, whose watery blue eyes seem to betray no emotion at all. Yet he is a great lover of beauty, as all his wives have proven. The first he found working in the cinders of a woodsman’s cottage. Some say that the girl’s jealous stepsisters threw her down a well to prevent her from becoming the young prince’s bride, but even death did not bar Prince Charming, and she enchanted everyone at the wedding. Her stepsisters were placed in spiked barrels filled with hot coals and dragged through the town until they themselves died.

This funnel is a jaunt through a ruined castle under the curse from a fairy tale … on pain of death! There have been rumors of field hockey … errr, I mean, of Prince Charming’s peculiar tastes in brides. Now Charming and his men have rounded up a group of villagers and he’s sending them in to a ruined castle in the Grimmswood to search for the rumored Princess beauty, who is sleeping therein. Thus starts our 0-level mob! The background here is quite Charming (:)) The designer does a pretty good job of weaving in the fairy tale element in the backstory and in alluding to it throughout the adventure. I don’t mention art often, but in this the negative style marries perfectly with the imagery in the text to provide a wonderfully evocative feeling of the strangeness present in fairy tales.

The adventure starts fairly strong with a rose-vine obstacle and a wizards lab. The roses fit in well and the wizards lab is straight out of the best OD&D adventures: weird, strange, and not of the standard rulebook. The wizards lab is full of weird stuff to play with. Glass eggs shows scenes of the deserts of mars, pickled frogs in various stages of life, a three-headed imp in a bottle, and a complete collection of Black Sabbath albums, among the other goodies. They all come at a hefty price though, although the spirit of the wizard does show up to impact gifts. The roses are a different matter. They are essentially an obstacle. You can take an alternate entrance or suffer their wrath and take the hit they impose.

Most of the rest of the adventure does not rise to this level. The stables, the courtyard, the kitties … these are all classic locations that scream out for life, and instead are given more of a throw-away encounter nature. Empty, with nothing interesting to explore, or in the case of the kitchen just full of a generic monster. The monster proper is interesting but it doesn’t marry well with the environment. You’ve got a great ability to invoke many classic elements with hearths, giant pots, cleavers, cheese, and all the rest from the vast fairy-tal milieu, and instead you choose a giant bug … and nothing else to interact with in the kitchen. This occurs presently in the adventure. When it tries to do something interesting it generally succeeds, but it doesn’t do that often enough. The rose dragon and the spinning wheel marry well with the vibe. The sleeping maidens have this mystical otherworldly vibe going on, exactly what you’d expect in a fey & fairy-tale sort of adventure. The rose dragon may be a decent example of the issues. It’s got a great set up: a mound of freshly cut roses three feet high, the scent fresh & strong! And that’s it. No other imagery or marriage of the creature to environment or even theme to the creatures abilities. It’s a half measure. The rose dragon deserved more.

There are some decent magic items in this adventure. There’s a golden orb that can answer three yes-or-no questions a day. That’s a great little item and it fits in well to the fairy tale theme. The other items tend to be more mechanical, and thus weaker. A shield that negates a crit, or a holy symbol that gives a bonus? A +1 sword that detects chaos? I rebel against these mechanistic monstrosities. The orb seems to have it origins in “this would be cool” and then the mechanics folio. The other items seem to have their origins in mechanics with a strained idea following. Yes, I realize that’s how most items are done in most adventures, but that doesn’t make it right. An idea, or effect, is much more powerful than a mechanic. The whole thing also full of generic jewelry treasure, which is more than little lame. Give it some thought and some detail Make it wonderful! That’s what we’re paying for, Wonder!

The primary baddies are the Hobyahs, which originate from a 1894 fairy tale book. They are given a weird little description .. And not weird in a good way, and then there’s this sudden emphasis on how they react to dogs. That comes from the fairy tale, but I don’t think I’ve ever seen a funnel character with a dog. If it’s possible it certainly doesn’t warrant all the emphasis the adventure gives. Perhaps expanding it to ALL animals would help. The descriptions are a little weak also. The primary description is “The hobyahs are fey goblin-like things, a quarter the size of men, and seemingly a mixture of human- oids and black fish.” That’s a pretty good start, but it doesn’t really go anywhere with it, just like with the rose dragon. The adventure needs more flavor and imagery, especially for these, the primary villains.

I really really want to like this. I like the premise, I like the wizards lair, I like the heavy rose thumbing (even if the read-aloud doesn’t really do a good job of selling it. I want more “cloying smell of roses” and less generic room description bullshit. The Hobyah have potential and the adventure ends well … its just has a very weak middle and makes only half efforts at supporting the DM in the encounters. If you going to have read-out it needs to SELL the room; painting a very strong picture. Be Awesome! Not mundane. Especially in DCC. I’m on the fence with this one, probably because of the my love of fairy tales and fey. If you’ve got a strong attraction to those elements then I would encourage you to check this out. If you’re not so strong I would pass … this thing needs some … support? During play. Yes, A certain amount of that s a DM’s job, but the adventure must inspire the DM to that and this adventure, while having a good handful of ideas, doesn’t really do enough to support them.