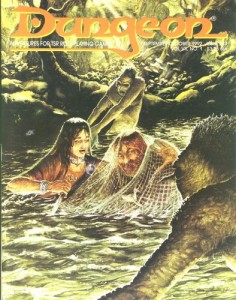 I’ve been sick, work has picked way up, I’ve had a super busy personal life. But those are all excuses. The reality of the situation is that reviewing Dungeon Magazine sucks the soul out of you. Even when they don’t to ally suck, like with with issue.

This is a decent little dungeon crawl with a little wilderness table surrounded by one of the most god-aweful and implausible rube goldberg setups that alone drain any enthusiasm for it. It amounts to: somebody stole/killed some thing/one, go get it. And the “somebody” turn out to be yuan-ti. After the soul sucking BULLSHIT os over the actual adventure is better than Ok. The wandering monster table is a nice one, with things like “you step on a sandling” and “dervishes looking for a ruin” and “nomads who trade with you.” There are a few “attack on sight” encounters and many more that have just a bit more to them. That extra bit, usually just a single short sentence, adds a wonderful variety to what otherwise could have been yet another generic desert dreck-fest. The dungeon entrance (which is really the first couple of levels) is mostly linear with A LOT of secret doors that you to find to keep playing. I’ve never quite liked that; secrets should lead to a reward and not be work required to be done in order to go have fun. Anyway, the real level has decent amount of looping corridor variety, especially for a level with only 15 or so rooms. It works and fits together well and provides some decent variety. There’s some decent descriptive text that serves to inspire: manacles turned left to open a secret door and poison needles shooting out of skull eye sockets. It goes off the deep-end in places with history & ecology and could use a good pruning down, but it’s much better than it’s introduction would lead one to believe.

This feels more like a D&D adventure than an AD&D adventure … and that’s a compliment. An evil wizard has disappeared … and so has the local girl he was courting. Inside the tower you’ll find a small 11 room dungeon that pairs with the three or so outside encounters around the tower. Inside is the usual assortment: skeletons, spiders, a “guardian” or two, and an imp … who is behind all the trouble. You wander around a non-complicated dungeon layout and find clues/key to get through a special door. This has a decent little vibe to it, although it seems a bit simplistic. The treasure, for example, is help in magical floating spheres, and a skeleton has a key lodged in its ribcage. It’s not a strong adventure, but it is strongER than many of the others in Dungeon. You could dump this in almost anywhere in a hex campaign and just up the monster HD to make it fit as a kind of mini-encounter in a hex crawl.

This has a mild Celtic vibe to it. It’s a hunt for a mysterious killer white boar that both the kings of men and elves want dead. It ends up as a kind of mini-dungeon crawl trough a forest and then a wizards tower/keep before the board shows up, turns out to be good, and kills the bad guy it was looking for. The white boar runs out of the forest, chased y wild elves, and in to the hunting party of the kings son. The son dies as does one of the important elves. The king sends the party to kill the boar, and the elves stop them and ask them to do the same, escorting them to the evil part of the wood. There the party follows the path, has a some adventures, and finds a ruined evil keep. Turns out the boar was there also, killing goblins, henchmen, and the evil mage. There’s a mild mythic/fairy tale vibe going on here that I generally like, although it is quite mild in this adventure. The goblins and wilderness encounters are handled nicely, with the goblins having only one man let, a coward, and a bossy chiefs wife and they are all holed up in one room. As with the previous two adventures, the quality level here is much higher in terms of evocative test and interesting things going on that a DM can work with. The adventure, especially the end, is more than a little slow once you get out of the forest. The ruined keep needs more to keep the suspense going or else the players attention is likely to wander.

A side-trek featuring two trained leucrotta. They lure you out an attack. I guess dungeon needed filler and couldn’t afford comics?

Widely regarded as one of the best Dungeon published. This is a Tomb of Horrors style adventure without some of the arbitrary nature of ToH and with some of the “hidden depth” that makes exploration worthwhile. There’s something like three pages of introduction and background before the 36 room dungeon is launched in to. Linear doesn’t quite describe it, but perhaps “linear with some dead ends” does … just as ToH did but on a slightly larger scale. The actual encounters though meet or far exceed throne in ToH. Many of them smack of the classics. The very first encounter is illustrative: three words in ruins carved in the door: Errukiz, Ezdrubal, Elomcwe. Dwarven for the Three Sins of Ruin “Treachery, Sloth, Foolishness.” Except the last one is actually buttons and you can press them in order to spell “Welcome.” THIS. A thousand times THIS. That’s what I’m looking for. It’s simple, it fits in, it’s short-ish (for Dungeon anyway) and it appeals to classic elements of play. Walls covered in eyes cry acid tears. Hill giant mummies lay DORMANT until their sarcophagi are looted. How great is that? They don’t attack on sight! There’s a green devil face you can shrink yourself to get past by crawling through a nostril … it goes on and on like this. It makes sense. I’m not a big fan of things making sense, generally, but in this case it’s all different. This is going to sound crazy, but … it’s like the designer thought up a dungeon AND THEN went back and filled in some mechanics. Oh joy! The vibe here is not “how can I force my mechanics to fit the situation” but rather one of “here’s a cool thing, and here’s the mechanics I added.” This has good thumbing and nice tricks & traps with some decent imagery at times. Everything you need to have a good time. Another good example are some of the monsters. In one room there’s a section of clay floor. If you pour water on it a figure struggles to get out … an emaciated human with the head of a fanged pig. It’s a clay golem! … But the party has to figure that out for themselves! This is PERFECT. It evokes the EXACT vibe that I want out of a monster. It’s integrated in, it isn’t given away to the players but the clues are there. That’s great stuff! The monster integrates perfectly in to the room, in much the way that some of the creatures in Many Gates of the Gann did, or the devils in the Her Dark Majesty series. This adventure is well worth checking out.